I am a HUGE fan of the Hunger Game Book Series. When Catching Fire came out, I was amazed by the fashion that Katniss wore during the film. All of her outfits from the victory tour clothes, her gowns at the victor’s ball, her hunting gear and even her casual clothes were incredible! I was especially in awe of her wedding dress that she wore during her interview with Caesar. She looked gorgeous and worked that dress even though President Snow made her wear it.

I knew right away that I wanted to make the dress for my 2014 Halloween Costume and I think I’m even going to wear it to the Mockingjay Part 1 premiere, even if people think I’m crazy! I began planning about a year ago by researching the designer behind the dress as well as reading interviews from the costume designer on the film. I learned what materials the dress was made out of and planned to use the same materials (or as close as I could get). About a month ago, I began the creating process. Now, as a little background, I love making costumes but I don’t know how to sew. I have only ever made my costumes out of glue gun! I knew that to get the lightness and delicacy of Katniss’s wedding dress, I would have to buckle down and sew. I learned very quickly about the ins and outs of basic sewing.

I began the costume by buying a basic white corset and a 4-ring hoop skirt. I knew that the skirt would be the most challenging by the volume of the dress. I estimated that I would need 25 yards of fabric. Finding the right fabric proved to be difficult in my small town of Troy, Ohio. I found two different white organza fabrics and one white sheer chiffon fabric. Unfortunately, none of the organza was patterned like Katniss’s dress, so I ordered 400 yards of ribbon that I would hand sew on to the dress. I cut the organza and chiffon in half, so that I doubled my yardage to 50 yards. Sewing on the ribbon was so difficult! It was so slippery with the smooth organza and chiffon and the slick satin ribbon! After sewing on all the ribbon, I realized that the pieces were too wide, so I once again cut the pieces in half, creating 100 yards of fabric! I was shocked by how much thread I used. Around 1500 yards of thread. I absolutely hated re-threading that bobbin constantly. After the ribbon was sewed on, I had to create the tulle ruffles that are on the edge of Katniss’s dress. I Hated this part the most. First, I had to cut 15 yards of tulle fabric into 2’’ strips. Talk about torture! I ended up buying a rotary scissors, which helped to speed up the work remarkably. I then took those long 2” pieces that were 15 yards long and hand ruffled them in the sewing machine. This was a very slow process and 15 yards of tulle turned into two yards of ruffles. I had about 50 strips of ruffles.

I was running out of time and I had to do something I had NEVER done. I took off two personal days from work to finish my dress. I KNOW, I know, it’s crazy, but I love costume making and wanted my dress to be fabulous. On my first personal day, I continued to work on the tulle ruffles and I began sewing them to the ends of the organza. This was very tedious work. I also began to sculpt the Mockingjay cage that is wrapped around Katniss. I created this from 14 gauge aluminum wire. I would sculpt with the wire and then coated the wire in glue gun glue to create a thicker look. I referred to the pictures of Katniss’s cage to try to create an exact replica. I wanted the wings and curves to match the same points on her body. On my second personal day, I finished the costume by finishing the cage up first. I kept molding the wire to the body form and created a wrap around wire corset basically. I coated the wire in spray adhesive and used two bottles of fine silver glitter. I used white goose feathers and E6000 to create the feather corset. I carefully layered the feathers over one another to completely cover the corset. I then began hand sewing the ruffles onto my hoop skirt, which was very time consuming. I had to first sculpturally pin the ruffles to the hoop skirt and then go back and stitch them with thread to my skirt. By the end of day two, I was STILL not finished!

I traveled to Cincinnati the next day to be with my best friends who also was dressing up as Katniss: the Mockingjay dress and the Victor’s Ball gown. My best friend helped me to sew the cage onto the corset. This was difficult because we had to do it while everything was around the dress form. She held the cage in place while I strategically sewed the wire onto the corset. My other best friend helped me glue Swarovski crystals to the cage. There were around 100 crystals on my cage. I then glued feathers asymmetrically cascading down the dress to complete the look. I was very happy with the finished product!

Getting on the dress; well, that was a different story. I realized that by sewing the cage onto the dress, we couldn’t get the corset off the body form. OOPS! We cut out the thread and carefully unlaced the corset. That sucker didn’t want to come off the body form. Once we finally maneuvered the dress off, we attempted to put it on my body. All I can say is that it was painful. Once on, we were able to lace up the corset and my friends sewed the cage back onto the corset. Yes, I was sewed into my dress. I call that a “Make it Work” Moment, just like on Project Runway! I wore Christian Siriano Fire shoes and matched my makeup to Katniss’s. I even wore feather eyelashes and rhinestones. My friend learned how to French braid hair in order to achieve the true Katniss Hairstyle!

Here are some hilarious things that happened while wearing the dress. I did had worn earrings (not pictured) early on in the night but I had to remove them due to an allergic reaction! It was 30 degrees in Ohio and I couldn’t wear a coat due to the delicate wings on my dress! Feathers were dropping all over the bar we went to. We were the ONLY ones dressed up at the bar because we went out on November 1st. At the end of the night, my best friend spilled beer all over my gown, which caused me to simultaneously laugh and cry uncontrollably. I was a hot mess by the end of the night.

Overall, I am thrilled with this costume and can’t wait to wear it at the premiere of Mockingjay Part 1. I will be excited to see how fans of the series react to the costume! Now I am off to remove beer stains and attach more feathers; I hope you enjoy my costume! 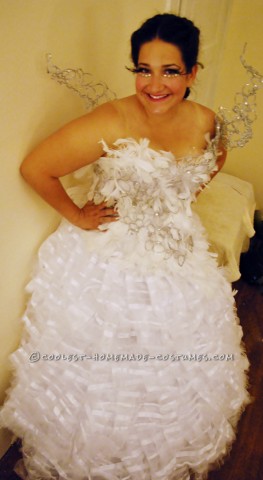 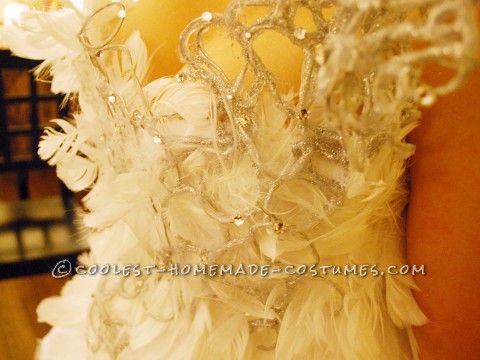 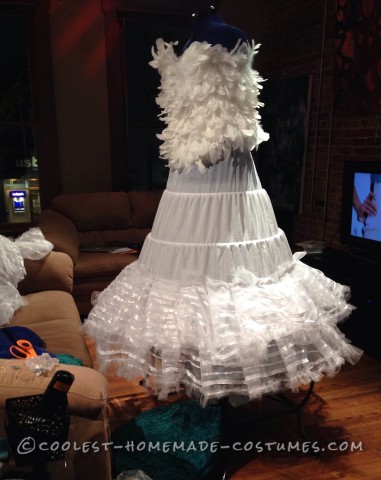 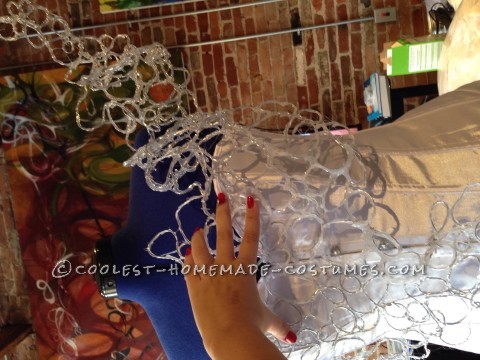 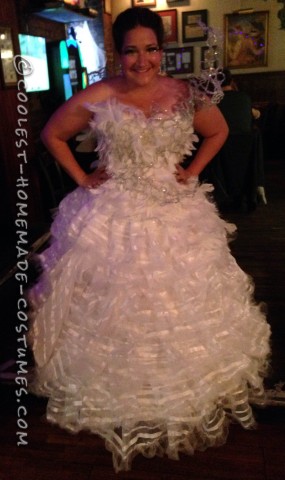 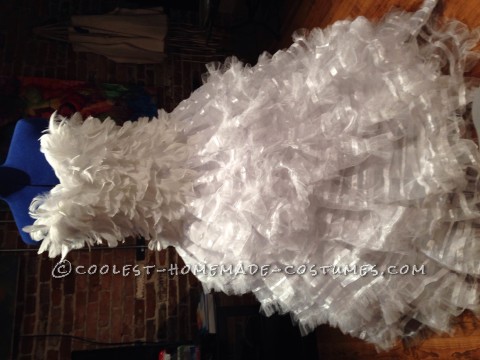