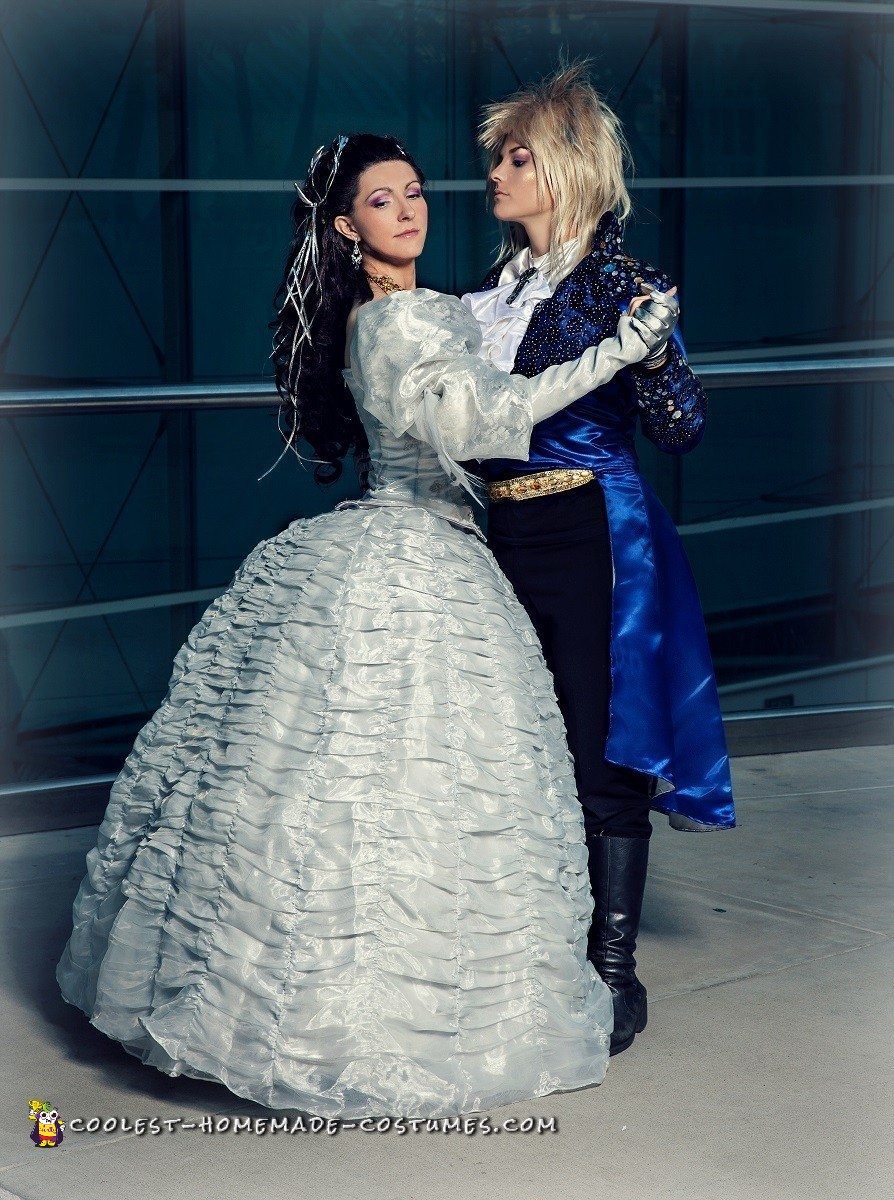 I wanted to construct this Labyrinth costume “by the book”and by the book is what I ended up creating.

The first thing I noticed about the dress, was the fit of the bodice. It was a glove on Jennifer Connelly’s body.  I had made a few bodices before.  The one I made for Queen Frostine, had the patterning of a corset as a lining, and with the White Queen’s dress I wore a corset under.  Both lay well, but weren’t “by the book”.

I conversed with a friend who went to fashion school.  She sent me a few pages of her text books which showed how to structure this bodice.  The bodice needed 3 layers: the fashion fabrics, a center piece which acts like a corset as it has boning, and the lining.

I started with making a trial piece.  I had two patterns I liked. One I got because it was a corset and the other for the sleeve position.  I ended up using the corset pattern in the front and the other in the back.  I had to adjust the pattern on the waist and bust to get that snug fit.

Armed with the perfect fit pattern for my Labyrinth costume, I decided for the first 2 layers, lining and boning to use slightly stretchy materials.  This allows the fit to be restricted more by the fashion fabric than the lining; otherwise those pieces would need a tiny bit of give.

So here comes the tedious part:  In the original dress, it is hard to examine due to film quality in the 80’s, there are darker patches under the mirror organza.  This could suggest a patterned fabric.  Some pictures gave me the feeling of a gold sequence piece on the top layer.  It’s clearly not on the outside layer.  I concluded that the patterning was gold and silver sequencing under the organza.  Whether it was or not, I don’t know, but it looks really great!

I proceeded to make the sequenced pattern myself on my solid fashion fabric, the mirror satin, with the sequenced tulle. I cut out sections from the netted gold and silver sequenced fabric making it into appliqué.  First I laid them on the bodice piece and glued them roughly, and then I hand sewed them one evening… all evening late late late into the night.  I know it’s a bit over the top, but the darker areas where then really close to where they were on the original Labyrinth costume.  Never perfect, but I’m happy with the level of accuracy of that piece.

The next challenge was using a shear material because the raw edges of the seams could be seen through the material.  I did a bit of poking around online and found the French seam.  OMG I’m in love with this seam now.  It’s a perfect way to contain a raw edge!  However, I think using that seam ended up making my fashion fabric become a tiny bit tighter than I expected, but I allowed a little forgiveness in the back seam for the zipper… but just barely enough.

I didn’t have as many sequences and gems as my dear :~alcblueyes:, but there was still a lot to put on.   After my experience with The White Queen, where I used sticker gems, I knew I wanted to hotfix these ones.  I had a few larger bead gems which I sewed on first.  I then used Swarovski elements hot fix gems.  I really liked it at this point, but that night I found the mother load of a reference picture.  I could finally see a lot of details on the bodice!  The gems were neon yellow, yuck, there were blue beads and a lot of random stuff going on there.  I wanted to increase my accuracy, but stay far far away from tacky.  (Which tacky would be soo easy to do with this dress.)  I hand sewed on smaller beads I had from other projects, including some blue ones!

The last detailing for this Labyrinth costume was some fringe going on around the neck line.  This was hard to see even on the golden reference picture.  One day I had been messing with the mirror organza piece and accidentally melted a spot, it made a lovely torn apart fabric look and finished edges.  That day I thought it a wasted piece of fabric, but it was perfect for that neck fringe in the end.  I cut those pieces up added a little of the gray shear cut up and viola… done!

Jareth’s costume was a bit less cumbersome except for the sequin’s and gems on the coat. 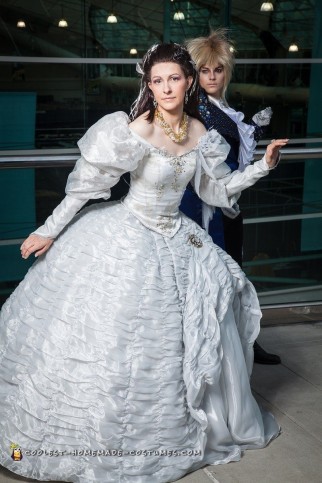 Jareth the Goblin King and Sarah from Labyrinth Couple Costume