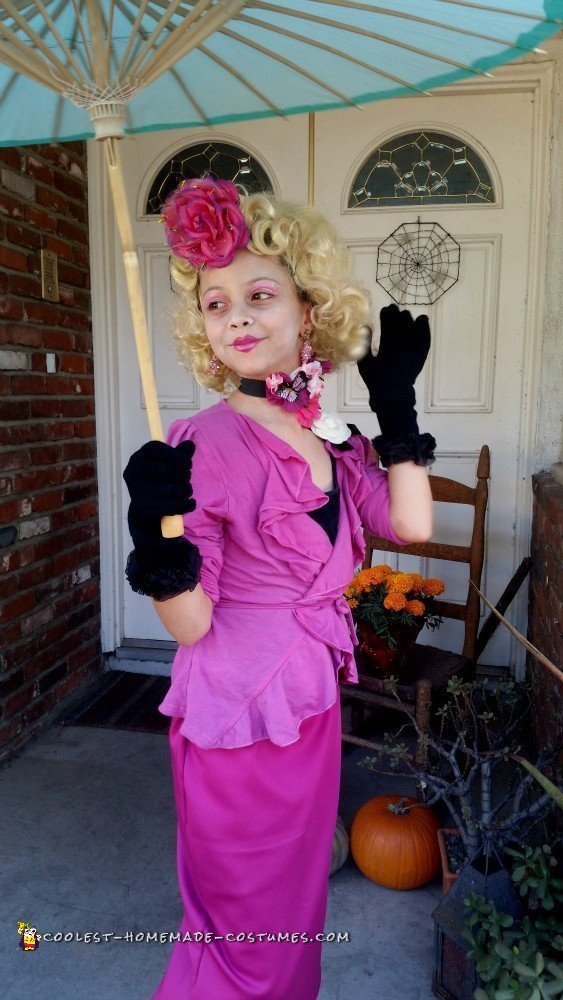 Just a few months before Halloween 2015, our nine-year-old, Darby, and one of her best friends caught The Hunger Games bug. As fans of the books and movies (okay, fine, we’re geeks about them), my husband and I really dug the fact that she had fallen in love with them too and was gearing up to read the books herself – even though we wondered if nine was a little young for some of the violence that occurs, yikes.

As kids will do, the conversations about what to be for next Halloween started, pretty much, on Halloween night the year before! Darby was no different and had squarely decided she’d like to be a steampunk girl. The costume was planned (but only in her head) until one night in late September when her friend was wondering what she should go as. It took very little for her to realize that her current heroine was none other than Katniss Everdeen – the amazing central character in the Hunger Games trilogy.

Thus, our little Katniss was born, and we then looked at Darby and said “And you should be Effie!” After about one second of trepidation on Darby’s part, both girls squealed (as girls will do) and, so, our duo costume was decided upon.

Effie Trinket, as played by Elizabeth Banks in the movies, is a character who, at first, is a sign of all that is wrong with the oppressive Panem government in the stories and their love for the “pageantry” of the games. As we progress in the stories, particularly in the movies because of Elizabeth Banks’ incredible portrayal and the costume designer’s beautiful work in the films, Effie becomes a beloved character – true to her job of “chaperoning” Katniss, the young tribute – and one who truly changes and evolves.

In short, she’s awesome and there’s no way not to love her. Like the character: funny, feisty, prissy and always fashionable, our Darby was, without a doubt, perfect for the job of being Effie.

Our friends who were going with the costume of Katniss seemingly had it easy…leather jacket?, (check, found at Costco in early October), boots? (check), braid? (check), bow and arrow? (check, check), and Mockingjay pin? (check, thank you Amazon!).

Me, on the other hand, I had a very (very) puffy, hot (hot) pink suit that I needed to get my hands on and I am not a seamstress. I was going to attempt to create the infamous “Reaping Day” costume. Clearly, I was out of my league.

At first, I decided to just throw money at it and have a talented young costume designer/seamstress I know sew it for me. Problem, I had no money, but that wasn’t going to stop me from trying.

Second problem, she wasn’t available. She did send me some links to blazers and skirts online though. Hmm, that settled it, I was going to piece thing together and it was going to rock.

Fast forward to many, many hours spent on Amazon (focusing on spending next to nothing and only getting items available via Prime), where I sourced a fantastic blonde wig (to cover my kid’s long, brown hair), a long raspberry-colored pencil skirt (size Small women’s, my kid is a size 8 in kids’ – this was going to take some adjusting) and, after hunting and hunting, was able to find a ruffley jacket that didn’t cost a hundred bucks and wasn’t going to have to be shipped from China and take 8-10 weeks.

Procrastinators do not have 8-10 weeks. Amazon Prime is all they (we) have. At just twelve dollars, the teeny weeny flaw with the jacket? It was pale, baby peach-ey blush colored. No problem, I told myself, there’s fabric dye.

With three days to spare (Yes, three. Remember, I’m a procrastinator.) The packages arrived. The skirt would be fine, a little fold here and a roll and tuck there. The wig – excellent. Especially after a little haircut I gave it. The jacket – still not raspberry pink. Off to buy some dye.

Pink dye / Night One – five hours in the dye bath and still pale peach. Go to bed with a pit in my stomach. Two more days until go time.

Pink dye / Day Two – read label (dummy) and note that the jacket is 99% polyester. Duh, the dye you bought is for cotton. I’ll never get that five bucks or those five hours back.

Pink dye / Night Two – I’m saved by Rit Dyemore (their product for poly blends) in Super Pink. Three hours mixed with some water and a half bottle of red wine (for the jacket, not for me, but I did consider it). The jacket comes out of the dye looking perfect. (The spot on my kitchen counter right by the stove where I was mixing the dye also comes out looking very pink. Not as thrilling as the jacket coming out great, but we take what we can get.)

Using the spare bits of dye left in the pot I used for the jacket, I highlighted the blonde wig here and there to give some pale pink streaks. Nice touch. I wondered who I’d be thanking for my Oscar in Costume Design. I have until January to think it through so I move on.

For the neck piece, I used a black, stretchy headband from the dollar store along with a few fake flowers, also from the dollar store. For an extra nod to the movies and one of Effie’s other grand costumes, I added one perfect butterfly to the neck adornment. Except for a few glue gun burns (wouldn’t be a night of crafts without a few glue gun burns!), the collar ends up being my favorite part of the costume to make and it looks amazing on.

Additional accessories: black low-rise ankle boots. Effie wears these in the high-heeled version. At Payless, my daughter wants to try a pair of such insanely high heels for herself. She asked; I said, “Sure, give those babies a try.” She took two steps down the aisle, realized those things were no way the correct footwear with which to scour the neighborhood for the amounts of free candy she had her sights on so we moved along. The boots she chose were perfect and, bonus!, a pair she’ll be wearing all season in her non-Effie life!

Under her newly dyed jacket, we chose a black tank top and she was good to go. For gloves, I couldn’t find any with a ruffled-wrist so I purchased some black pre-ruffled “Shirley Temple” style socks and cut them into finger less gloves (removed the heel).She also had a backup pair of just simple, regular stretchy black gloves (the kind you can get at the drug store for super cheap) to wear with the finger less glove-socks to complete the look.

The addition of pale white make-up (I used traditional cream Halloween make-up on a cosmetic wedge and carefully dabbed it on for a “healthy and natural” Amadeus-ey look), loads of pink around the eyes and those perfectly stylized lips (some obnoxious Wet n Wild fuchsia from days long past), and a giant pink bow on the wig (leftover from a dance costume) and Effie Junior was born right in our bathroom. She was transformed and it was awesome!

Perhaps the best part of the costume was the way she carried herself in it. She affected the accent of the Capitol (the place where Effie was from, as described in the books and movies, “May the odds be ever in your favor!”) and carried herself in a way the real Effie would have been most proud of.

Our motto for the night was (straight from the movie): “Eyes bright, chin up, smiles on!”. As you can see from the photos from the evening, she never went out of character and she looked so great. We added a paper parasol we happened to have as a decoration in Darby’s room; another nod to the character in the movie, and the first scene in which she appears.

People stopped her, even if they didn’t know who she was (seems some people are not as big of nerds as we are, go figure), to say how cool her costume was. And when she walked with her best friend “Katniss,” they were simply perfect. She even scored a full-size candy bar from a house that was only giving out the big stuff to worthy costume-wearers. Of this, she is perhaps most proud. There’s a lot of street cred in full-size candy bars among the ‘tweens.

I’m definitely proud of the costume – as was Darby – and the fact that it is one that can’t be bought in stores. My husband and I have made many costumes for our kids over the years, but this one is pretty dear to me.

I mentioned Rit Dye on a few Instagram posts and they loved what I’d done with one of their products too (we were one of their “Rit or Treat” winners), so it was fun to share it on social media as well. In fact, I think the first picture we posted of the girls has nearly 200 likes on Facebook. That’s, like, almost viral for a regular non-Kardashian person, isn’t it?

We are excited to bring the costume back out on November 20th for the premiere of the final installment of the Hunger Games movies. What’s cooler than a Halloween costume that can be worn again? 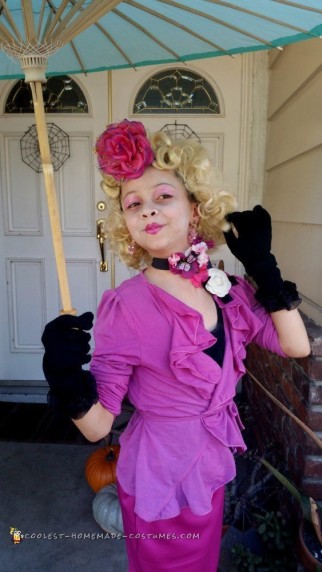 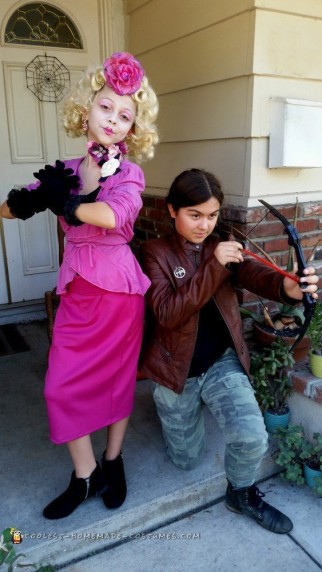 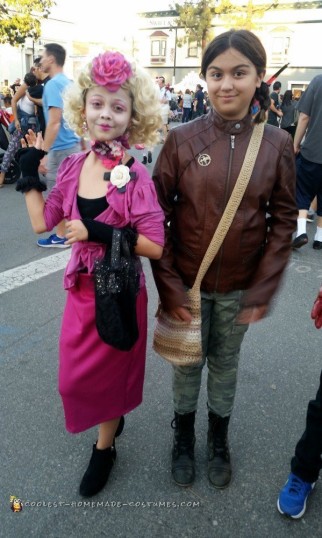