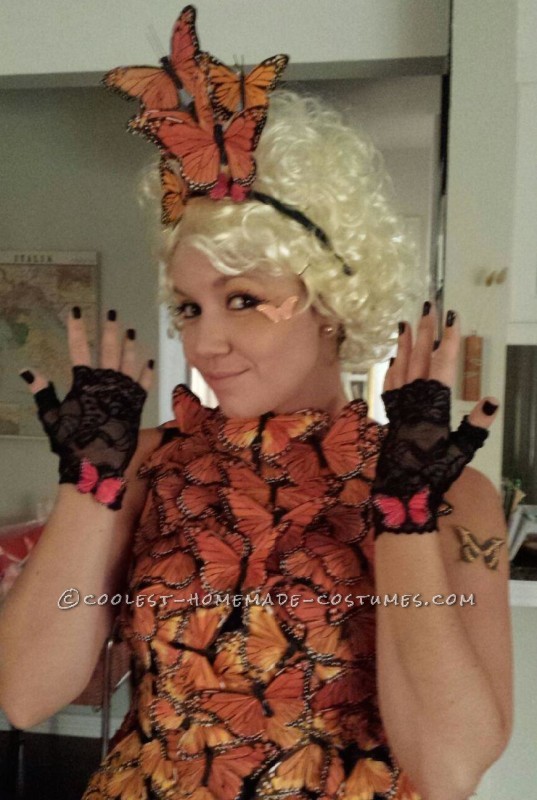 The first time I saw Catching Fire in the theaters I was immediately obsessed with all of Effie’s costumes. Her outfit in the reaping scene really stuck out, though. That butterfly dress was just breathtaking! After researching it online I found out it was designed by Alexander McQueen. No wonder it was so amazing!

I decided I had to make that butterfly dress for Halloween. Little did I know how much work it would actually take!

I started by finding a dress that was bell-shaped and, most importantly, zipped up the back (Good luck getting into it without ripping off butterflies otherwise). Then I started looking for the butterflies online. I found a few sites that had monarch butterflies made from feathers. They are hand-painted, which makes them a little pricey. The average price per butterfly was $0.80. That doesn’t sound too bad until you realize how many butterflies you actually need!

I ordered sixty butterflies to start. Then I made a trip to the craft store and purchased a hot glue gun, three spools of tulle fabric, a roll of black ribbon, a headband, and butterfly stickers.

I put my bell-shaped dress on a dress form (height-adjustable to save my back) and started gluing the butterflies onto the dress one by one. They look much better if they overlap with each other and there are no spaces. After gluing for a couple of hours, I realized 60 butterflies was not going to cut it. I ended up needing 245 butterflies for the dress and the headpiece.

To fill out the bottom half of the dress, I made a tutu by cutting a bunch of 19” pieces of tulle and looping them around a ribbon I measured to fit my waist. There are lots of DIY tutu instructions online for this. It’s super easy to do. Tip: It’s important to put the tutu on the dress form before you start gluing butterflies onto the skirt. This way the dress is the exact shape it will be when you wear it, and the butterflies are positioned correctly when you glue them.

For accessories I bought lace gloves online and glued tiny butterflies to each of them. I also bought a wig online, which proved tricky. It was hard to find a wig that was just right for Effie’s look. I ended up purchasing a Dolly Parton wig and cutting off a lot of it and pinning it in a bunch of places. I wore Michael Kors wedged booties, which weren’t quite as extreme as Effie’s booties, but they looked close enough.

For makeup I used pale foundation and covered it with white powder. I also bought yellow and orange eye shadows and blended them together, shadowing the crease of my eyelid with the orange. I added black eyeliner for definition and put on some serious fake lashes that I purchased at a drugstore. My eyelids felt like they weight 10 pounds each! I stuck a butterfly sticker on my cheekbone to finish the look.

For the butterfly headpiece I decided a headband made the most sense. Some of the butterflies I purchased came attached to wires, which was annoying when I was gluing them on the dress, but ended up being great for the headband. I used the hot glue gun and looped the wire around the headband before securing it with LOTS of glue.  I did this with several butterflies.

On Halloween night I went to some bars in downtown in Austin, Texas. Thousands of people were out in all kinds of get-ups! I was only out there five minutes before someone stopped me and asked if they could get a picture with me. This happened all night! I was impressed with how many people knew I was Effie. Lots of people asked, “Did you make that?” When I responded “Yes, I did”, their mouths hung open. That was exactly the result I had hoped for!

A word of caution for those making this costume: crowds and dance floors will crush and rip your butterflies. Also, the butterflies that touch your skin will chafe and cause a rash. This happened under my arms. Also, wear shorts under the tutu. Otherwise you will hate your life and want to rip the costume off all night. It’s all worth it, though, to look so amazing!

My night out was extremely satisfying- especially since I didn’t see one other person with my costume the whole night. That’s what I love about DIY costumes. There’s no chance you’ll have a “who wore it better” moment with a stranger! Let’s be honest, though; If there had been one of those moments, I would’ve won anyway. 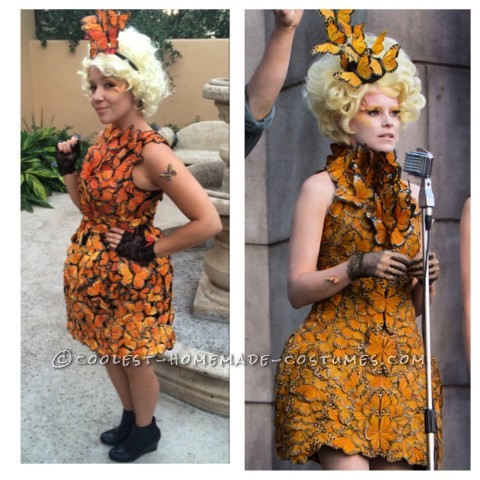 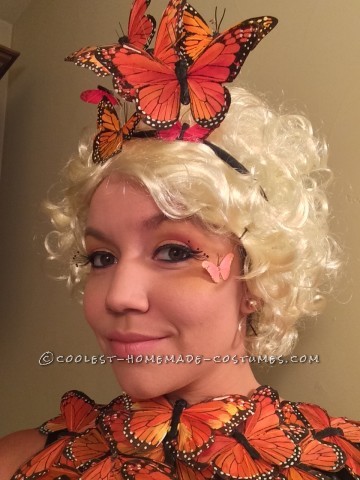 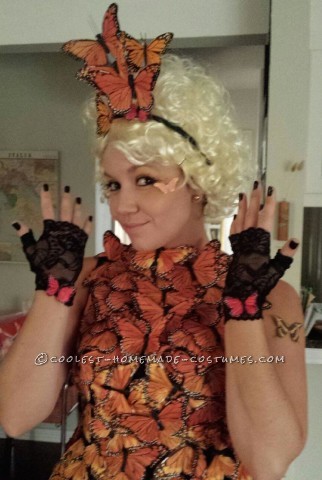