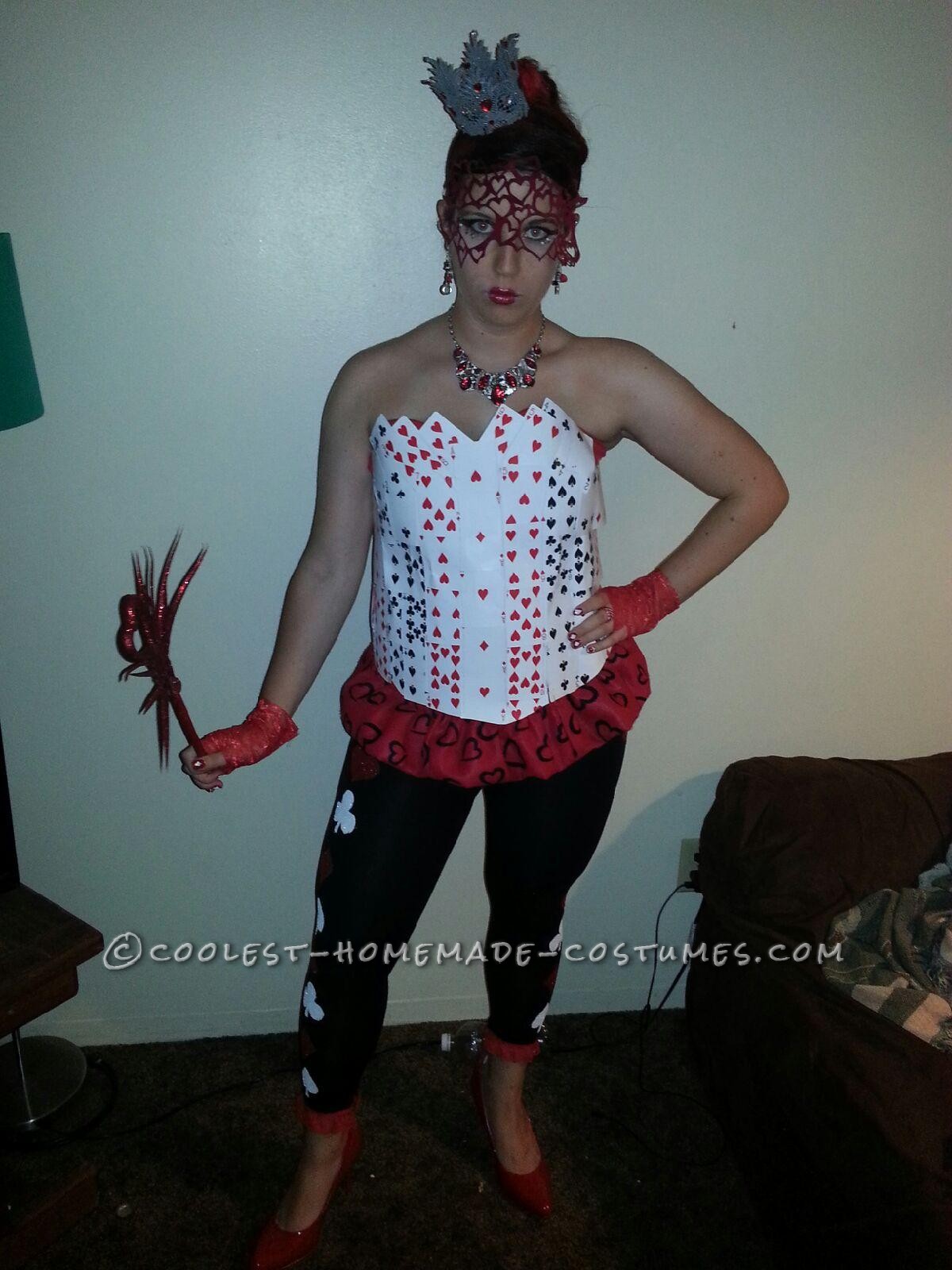 True Life: I plan my Halloween costumes at least a year in advance

I’d be lying if I said I don’t already have plans for 2014. Last year before I even wore the costume I had worked so hard on the previous year, I said “I’m going to be the Queen of Hearts next year” and then I designed a general sketch of what I wanted it to look like. I love to make costumes with unconventional items so I wanted to use playing cards. As a junior in college this is probably trying too hard compared to the multiple cats, mice and Miley Cyrus’s of this year but I like to go the extra mile.

My mom has always made my costumes since I was a child and I was never allowed to just buy one of those costumes in a bag. They were too expensive and unoriginal. So, I decided to include her in the process though there were a few screaming matches and debates on how to make this work. We searched high and low for the base of the costume. Finally, we found a basic red tube top with a giant, red, sequined bow (which was then cut off) for $2. At a craft store we found red felt with hearts printed on it on sale and bought them out. I had wanted a peplum top so we ruffled the felt around the bottom to create it. We bought packs and packs of playing cards and debated for a while on the best way to attach them. Finally we decided to just sew them on row by row only to find that it made the top SIGNIFICANTLY smaller and we could not zipper it. So, as trial and error type of people we ripped out the seams of most of the cards until the zipper would close which left us with the solution to staple the cards to each other from there making flaps on either side of the costume. But then what you ask? A corset of course! We punched holes in the back and weaved a ribbon through. It gave it that queenly royal look anyway. Now I’m not big on dresses so I took a pair of leggings and stenciled all of the suits down the sides in red and white and doused them with glitter before they could dry. After, I secured the glitter with hairspray. Then we attached red, lacey trim to the bottom.

The accessories were probably my favorite part of this costume particularly my mask. I had seen a similar one on Pinterest selling on Etsy for $39.00. I said “no I’ll pass” and figured out how to make my own. I took textured scrapbook paper and traced the design on the back leaving holes for my eyes. Then, with the tiniest scissors imaginable, cut out all of the little hearts that made my mask. The crown was another adventure. I couldn’t decide on a shape and attempted to use paper but nothing was good enough. My mom found a piece of lace that was pointy at the top and when wrapped around gave the shape of a crown. But how do we get fabric to do that? We wrapped the lace around a mason jar and sprayed it down with fabric stiffener after painting it silver. Success! A crown. I then glued heart-shaped jewels anywhere I could and slid a black headband through the holes in the lace for placement. The fingerless gloves were made of red lace we found at the fabric store. The scepter is a dowel painted red with a glitter heart attached and fringy glitter leaves hot glued around the edges.

On the night of the Halloween party I was ready for this to finally come together. I painted my nails with all the suits, sprayed my hair red (as I sit here typing, my scalp is still stained red), complimented my crown with a rose, put on my jewelry, and did my make-up complete with jewels around my eyes. I had my roommates suffocate me as best they could with the corset and put on killer (literally) red heels. After all, the party was only across the street.

At the party, there was a lot of amazed reaction. The cats, mice and Miley’s felt shame and I was asked multiple times how I did it. Time and patience. I tried to keep a two foot radius around most people, afraid the cards would tear off of me. I also could not bend down or sit down to save my life. All worth it for the great pictures and compliments.

After stressing that my vision wouldn’t come true, the costume was successful. I only wish more people had known to bow to the Queen of Hearts. Now I will continue to stress again until next year’s costume is on and perfect :) 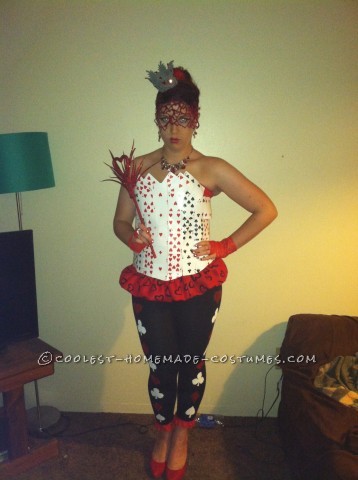 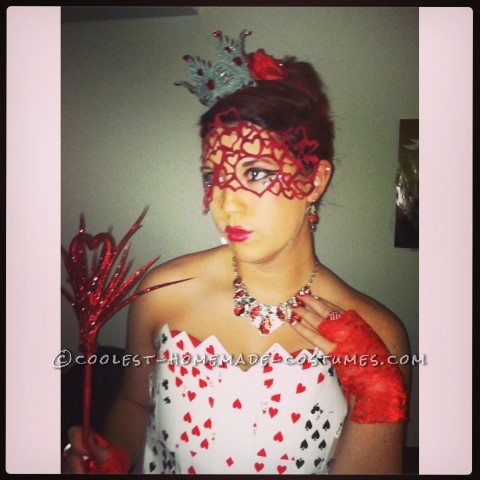 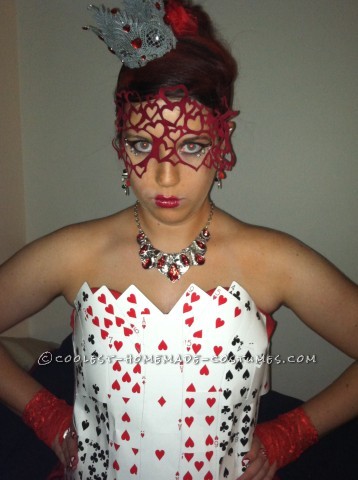 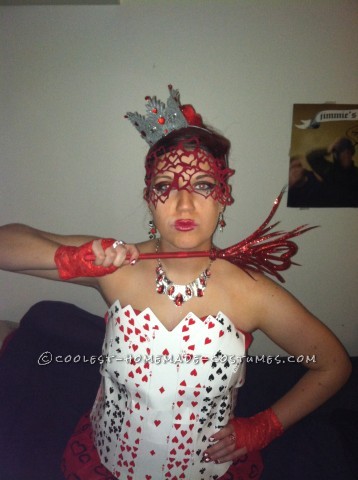 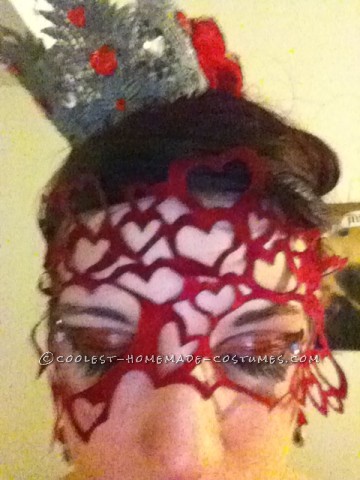