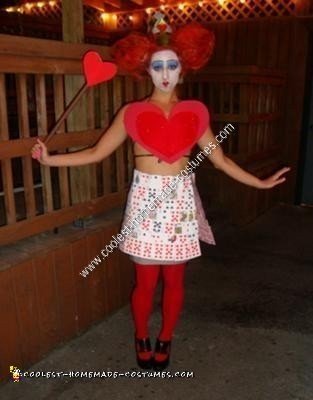 The Queen of Hearts has always been one of my favorite villains, so this year I decided to use her as my costume inspiration. Since Tim Burton’s Alice in Wonderland was released this year, I knew there would be a lot of Queen of Hearts roaming around on Halloween, so I tried to make sure my Homemade Queen of Hearts Halloween Costume Idea would be different from the rest. So, I drew inspiration from both the original cartoon and the new movie, creating what I think was a unique costume.

First, I picked out an old skirt and covered it in four decks of playing cards. I pinned the first row of cards to the top of the skirt, then super-glued the rest on in rows, making sure they all lined up to create a nice design. The cards piled on top of each other made the skirt flare out a little toward the bottom, creating a fullness to the skirt. For the top, I cut out a giant heart from a piece of foam, then glued on a sparkly heart over the top, attaching both to a bikini top. This made my costume look like it was only made of cards and hearts, which it basically was!

I did my makeup and hair like the Queen of Hearts from the Tim Burton movie. The makeup transformed the entire look into sort of a dark character, which I liked. For the hair, I separated it into two sections, then inserted a plastic cup into each, securing hair around it with a hair tie and pinning the loose ends to create even more volume. Then I sprayed it red with colored hair spray.

For finishing touches I wore red tights, a crown with added hearts and made a scepter with a foam heart on the end.

I liked this costume a lot, because even though I wasn’t the only Queen of Hearts out there, mine looked a lot different than the rest. I got a ton of compliments all night from people wanting to take pictures, touch my hair or look closely at my skirt. I also loved how I didn’t even recognize myself with the makeup on. That’s what a costume’s all about! 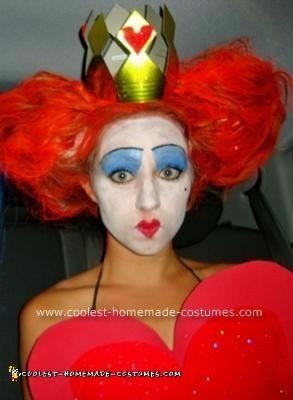 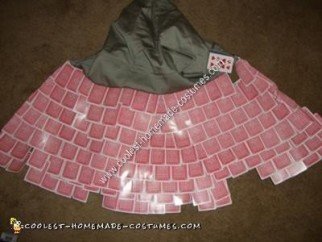 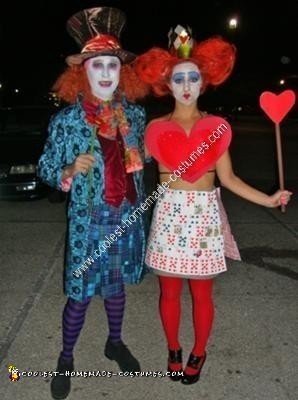 Queen of Hearts DIY Costume for a Girl