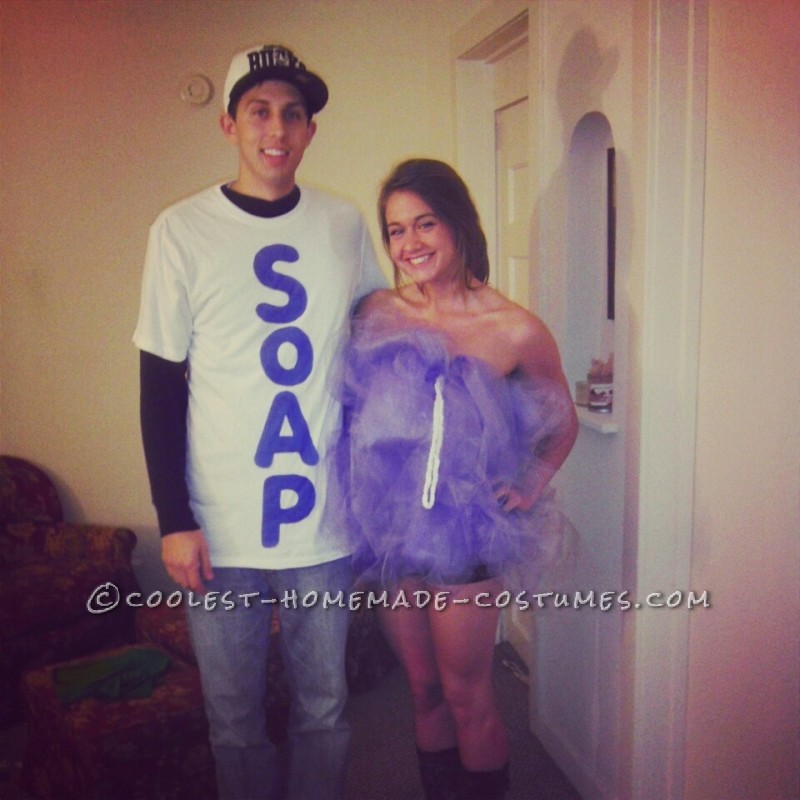 Halloween has always been one of my favorite Holidays and I never cared for those typical store bought costumes, so every year I try to think of something that is unique and fun!

Last year my boyfriend and I wanted to go as something together, but the procrastinators we are we waited till the last minute to think of a costume. We wanted something quick, easy, cheap (since we are college students… ha), and fun! My mom had given me the idea as going as a Loofah and knowing not many people would think of that type of costume, so naturally I loved the idea!

We got everything we needed for our costumes at a local arts and crafts store. My boyfriend has used a white undershirt he already had at the house, and we simply just cut out letters to spell soap and glued them onto his shirt. Easy enough!

I bought about 5 yards of purple tulle. (You really only need about 2-5 years of the tulle, but I wanted my costume to be extra fluffy so I went with the maximum amount), a couple feet of elastic band, and a pack of safety pins.

On Halloween, I just wore a tube top and some yoga shorts and some purple rainboots that matched.  I then pinned the extra tulle onto my top and onto my shorts so everything was in a round-ish shape. After about an hour of being stabbed by safety pins the costume was complete and totally worth it!

Unfortunately, there were no costume contests where we were celebrating but I know we would have one, since we were surrounded by the not-so-unique cat, police officers, firemen, ect, costumes. Everyone was very impressed (and a tad jealous of our creativity). It’s easy to say that were going to have to think pretty hard this year to top that costume!