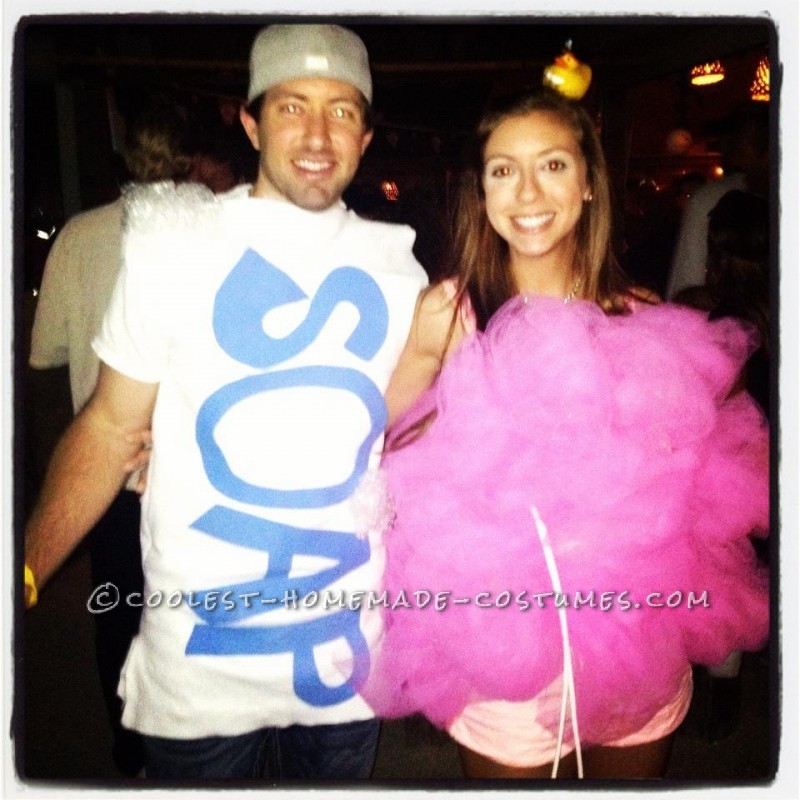 So, I absolutely LOVE Halloween but, this year I was having the hardest time trying to decide what in the world to be! I finally decided that I would be a Loofah and my beau could be a bar of soap costume!

To make my costume: I had an old pink romper in my closet that I only use for a swim suit cover up so I thought I could use that as the base to my costume. I went to Jo-Ann’s and got about 20 yards of pink netting (not tulle, the netting looks more realistic). I also picked up a yard of white rope, a cheap headband from the dollar store, a rubber ducky, and a TON of safety pins!

To make the actual Loofah, I just started at the top of the romper with the netting and started pinning (it would work out a lot easier if you had a friend that could help so that someone could actually be wearing the costume while you do this so that the fabric of the romper is stretched.) I wrapped the netting around the romper, bunching it as I went. After I finished pinning the netting, I found a good spot to pin the rope, pinned that, and then starting “fluffing.” I just went around the costume and pulled apart the pieces of netting that were too compact. Then, for a little something extra, I hot glued a rubber ducky to a headband and wore that on my head.

To make his costume:  I got 2 pieces of white felt and used a hot glue gun to glue them together. Then, I turned it inside out (it was sorta like a felt pillow case). Then I cut holes for his arms and head. I then cut the word “SOAP” out of blue foam and hot glued the letters to his costume. For a little something extra, I glued some bubble wrap to his costume to look like bubbles.

All night people were telling us how awesome we looked and kept asking for our picture. We even were selected to compete in the costume contest and won 3rd place! Also, a woman that has her own natural soap shop asked if she could photograph us for her website! 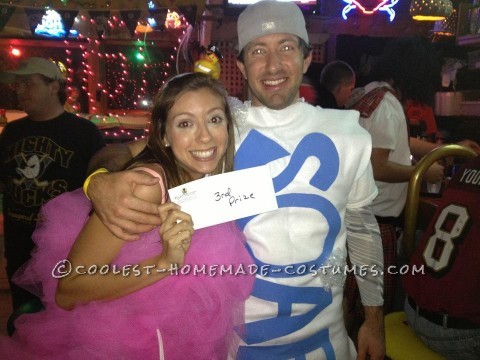