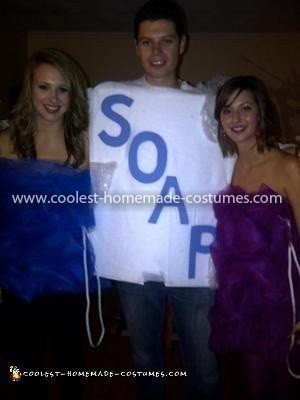 My friend and I decided to be loofahs this year. My boyfriend, having nothing to wear the day before the Halloween party, decided to be a bar of soap! Our Homemade Loofahs and Bar of Soap Group Costumes was a huge hit at the party we went to!

I used 10 meters of netting, while my friend used about 13 or 14. We cut strips of the netting (folding it over 3 or 4 times) and bunched and safety pinned, over and over all over the dress until it was covered. We waited until we had it on to pin the rope, so it was easier to hide it under one of the bunches. We were so happy with how they turned out!

Once we put them on, we had to pin some pieces that unraveled when we got into them, which we needed each other to do. Lastly, we put pieces of scotch tape around the ends of the rope so they didn’t unravel while we were wearing them, and stuck a large safety pin through both ends, and pinned it under one of the larger bunches on the side. It worked perfectly!

For the soap costume, we used 2 pieces of mat board (used for framing),tied some string to hold them in place over his shoulders, and glued some strips of sturdy cardboard, attaching the boards together, around his hips to keep the the boards in place and maintain the rectangular shape as opposed to a sandwich board.

We then covered the box with white felt, keeping together with double sided tape, and cutting holes for his head and arms. We cut out the Soap letters in blue foam board and stuck them on with fabric glue. We then bunched pieces of bubble wrap all over the soap bar to make it look sudsy. 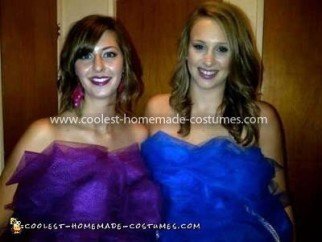