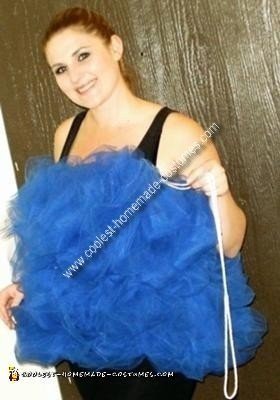 After trying to come up with a homemade costume idea, I started thinking about household items that I could possibly be. When I got to thinking about shower items, it was no longer a question, I thought of a Loofah Costume Idea. I bought some tulle material (about 15-20 yards) at Joann’s fabrics, along with about 100 safety pins. I also bought about a yard and a half of rope to be the loofah’s handle.

With help from my cousin, we were able to create my costume in about an hour. I wore black clothing, and constructed the loofah by first wrapping it around my body. Then we bunched up the tulle and safety pinned each bunch. This went completely around me and we continued to bunch up pieces of it until it had the “poofiness” of a loofah. Though it would have been more difficult and would have taken longer, this can be constructed alone, though I highly recommend finding a friend! This can easily be turned into a couples costume if someone dresses as a bar of soap or something similar.

I got many compliments for creativity and originality! 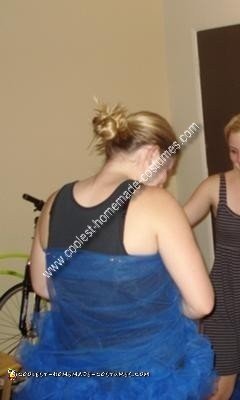