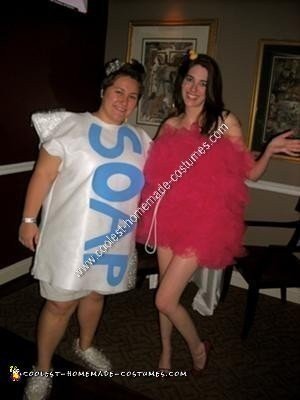 After seeing some adorable loofah costumes on this site, I decided to make my own and have my wife dress as a bar of soap! It was a really cute Homemade Soap and Loofah Couple Costume and here’s how I did it:

For the loofah: I found a bright pink cotton romper on the sale rack at the mall for $7. I then used a HUGE pack of safety pins and at least 20-30 yards of pink tulle. I cut the tulle into long strips and just bunched it up and pinned the pinched part of the bunch randomly all over the romper until it was completely covered. I actually pinned while WEARING the romper to make sure I placed the tulle bunches properly… so I needed a little help pinning to the back. Once it was fluffed up, I looked exactly like a bath loofah! Then I pinned a long piece of rope purchased from the craft store right in the center. I accessorized with a rubber ducky glued to a headband. I liked that it looked like I wasn’t wearing anything under my costume. People absolutely LOVED it! And they were really entertained when they saw that my wife was soap.

For the bar of soap: I wanted to make something she would be comfortable wearing all night so I knew wearing a cardboard box was out. Instead, I hot glued seams down the sides of 2 pieces of large white felt and then flipped it inside out. Basically, it created a giant felt pillow case. I then cut holes for her arms and head to stick through and she could just pull it right over her head and wear it like a tunic. I cut out giant blue letters for SOAP out of foam that and hot glued them to the front. At the last minute, I decided to accent with some bubble wrap. I even added it to a headband so it looked like her hair was soapy and covered some old white shoes with it. The little details really made a difference!

We had the best time making “suds” on the dance floor and we even won the costume contest for Most Creative!