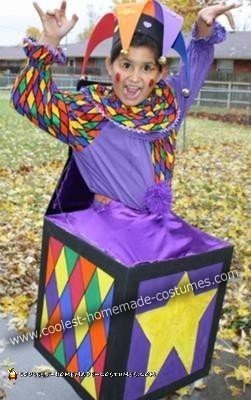 This Homemade Jack in the Box Costume started as an “easy” box costume, it turned into a big project. Several years earlier I made a super cute clown costume for my older daughter, luckily it fit my youngest and it was used for the Jack-In-The-Box costume. Having the clown costume already made saved a lot of time and gave us a pattern to use for the box design. I used a large cardboard box and used a box cutter to cut the lid off on 3 sides and then taped the lid together so that it was one piece and it opened like a Jack-In-The-Box should. There was a lot of painting to be done, my daughter who was 8 at the time got to help a lot with the painting. I used a yard stick to make lines on the box and then used masking tape to mark off the lines (just like a real paint job) to paint the different colors. Each side had a black border (yard stick helped to make straight lines) and two sides had the same harlequin pattern as her clown costume.

The harlequin pattern took a lot of time, marking the lines, taping off the pattern and then allowing for drying time before painting the next color. To help the lines look really straight after they were painted, I used curling ribbon to mark off the lines, just used regular glue to attach the ribbon. The other two sides were her choice, one side had a heart and the other side had a star. We used regular craft paint for the project and the star had gold glitter sprinkled on it and the heart had red glitter sprinkled on it-this added extra “pop.”

I wanted the box to look kind of fancy so I found a silky material to cover the inside of the lid and for the lining that would cover her lower body while she was in the box. I didn’t do any sewing for this part. I used hot glue to attach the material to the box. I folded the edges of fabric under before gluing it to the box, this made the material have “clean” edges. I cut a hole in the material for her to step through and then I glued the material to a belt that was used to cinch her into the box. It was snug enough that she didn’t have to hold the box up. I used plastic string (you find this at craft stores-used for bracelets & keychains) to attach the lid to the box, this kept the lid from falling all the way back.

I used craft foam to cut out her joker hat, I used hot glue and staples to hold the hat together. I let her decorate the hat with foam sticker shapes, she used these on the box also. I glued jingle bells to the tips of the joker hat for added cuteness. We found some eyelashes that were rainbow colors, added some red cheeks and she looked awesome.

Shoes were just some cute little canvas shoes (added jingle bells to her shoes) and bright socks. There is a crank that isn’t shown in any pictures. To make the crank I used some extra big & fuzzy pipe cleaners that I found at a craft store. I poked a small hole in the side of the box to insert them & then attached them with big staples on the inside. I bent the pipe cleaners to look like a crank.

This Homemade Jack in the Box Costume was a huge hit, made the front page of our hometown newspaper and won 1st place at the mall costume contest. 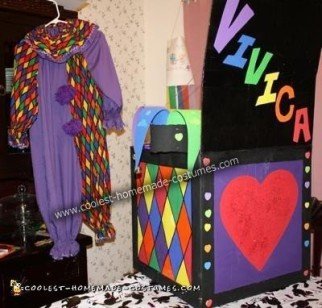 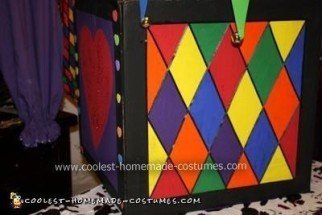 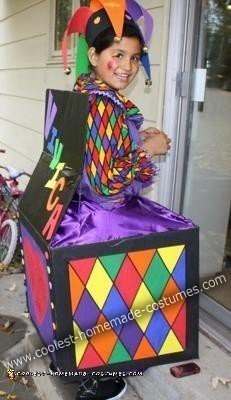 Coolest Jack In The Box Costume