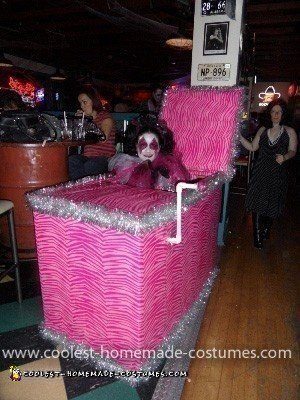 I went to Safe and Ship and had a box made to my measurements in my wheelchair. It was just easier that way instead of trying to find a box that would fit me perfectly. I had my father cut a square hole in the top for my head, shoulders, and arms to stick out, and a hole in the bottom so it could easily go over my chair.

After that was done I had a friend come over and we wrapped it in wrapping paper like a present. We used packing tape to tape it on securely. I tried glue at first and it was making the paper wrinkle. Stronger paper and glue would make it more sturdy and less likely to rip, but I was under time constraints and the tape and wrapping paper went rather quickly. I stapled Christmas tinsel garland around the top and bottom of the box for some added bling effect and I think it made the box pop even more.

To make the box hinge we cut and glued two pieces of PVC pipe to the top and one short PVC pipe to the back of the box and inserted a wooden dowel to make the lid go up and down. This isn’t the most sturdy way to do this so be careful when people touch your box. After one night out in the box we reinforced the hinge with some plastic ties to hold it on better. I suggest doing that from the beginning.

The tutu collar and tutu hair ties were reused from my Halloween costume last year. I made those by hand by simply tying tulle around one large hair band and two small hair bands. I recommend buying the tulle on a spool as opposed to buying it by the yard. On a spool it is the perfect size to cut individual pieces and the cost isn’t much different and way cheaper the buying a tutu in the store.

Since my box was pink and I already planned to reuse part of last year’s costume it was somewhat difficult to find the perfect pink jester or clown outfit so I improvised and purchased a disco costume with wild print and pink in it, bought some glitter purple and pink tights to go with it and the box so when I came out of the box I was in costume too. I think it is important for you to look the part inside and outside of the box.

Hair and makeup was done with stuff I had with the addition of face jewels and some face glitter. There is no right or wrong way to do your hair or makeup – you can be as creative as you want. I tried a few different looks before I liked my final look. I chose to put curlers in my hair and put my hair up in pigtails for cuteness. I added a small top hat so my hair didn’t look like last year.

My Homemade Jane In the Box Wheelchair Costume was a huge hit wherever I went and if they didn’t know me — they were really shocked when I told them I was in a wheelchair which made the costume even more ingenious to those that came by. Many people took pictures with me.

And this costume can be reused IF your box survives and if you have a place to store it. You can turn the box the long way and you have yourself your very own little booth — convert it to a Kissing Booth, Hot Dog stand, etc. They sky is the limit what you can do. I hope you enjoyed my costume. 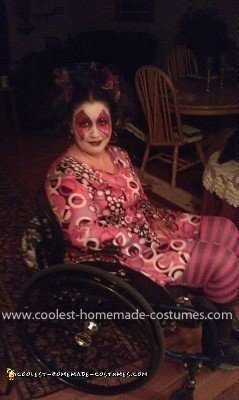 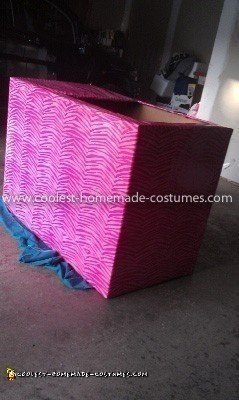 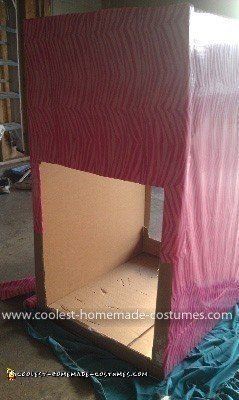