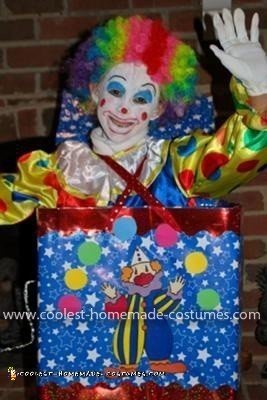 My 8 year old daughter did not want to be your average clown for Halloween. She wanted to jump out of a box too! Her “Jack in the Box” costume started with a cardboard box with the bottom cut out to allow for easy walking but still had a flap on the back to look authentic. We covered it in blue and white star holiday wrapping paper and a red sparkling border trim from the craft store. We cut out a clip art clown juggling to decorate the front and back of the box. The crank on the side was a bent coat hanger covered in silver tape and a duct tape handle. Polka dotted ribbon was used to hang the box off her shoulders so she could trick or treat.

The clown costume was purchased locally and white gloves were an added touch. I did her makeup to look like Bozo the Clown. The rainbow wig just added so much to the coolest Jack in the Box costume in the neighborhood!