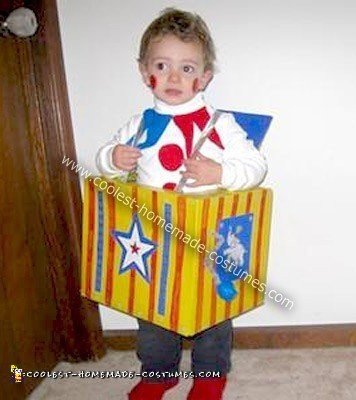 My son is named Jack and he recently turned 2. He has a toy Jack-in-the-box that he really likes and I thought it’d be cute if that’s what he was for Halloween this year, especially since his name is Jack!

I didn’t want to spend much money and tried to use things I already had around our house to make his Homemade Jack in the Box Halloween Costume. I only spent $3 for the yellow spray paint, $1 for the felt, and $1 for the face paint. I had the other paints/items around our house already!

For the box:
I taped shut the box on one end then cut out a hole for my son to come through and folded the flaps from the other side inward. After that, I spray painted it the base color of yellow. It took several coats. After it was done and dry, I used red poster paint to do the stripes. I used a little bit of light blue paint to put dots around the top and bottom edges. I printed off pictures of a circus horse, elephant, and stars and colored and cut them out. I used mod podge to glue them to blue paper and then to the sides of the box. I also used silver star stickers to add a little more to each side. I hot-glued some silver ribbon to the inside front and back of the box for shoulder straps. I made them so they were criss cross on his shoulders/back. I had some white pipe cleaners that I spray painted with some chrome colored paint for the crank handle. I twisted them together so they’d be thicker. I shaped it then stuck it through the box on the side and added a ball of blue felt for the ball on the end. I had wanted to use a Styrofoam ball I had, but it was too big so I had to improvise! The felt ball worked okay. I hot glued the handle to the side so it wasn’t moving around so much.

For the lid:
I cut another square of cardboard from a different box and painted the back side to match the outside of the box (yellow/red) and painted the inside blue and applied shiny silver star stickers. To create the hinge for the lid, I spray painted some Popsicle sticks that same chrome color and then bent them to form the hinge. I used 4 of them across the back of the lid and hot-glued them on. Worked great!

Jack’s suit:
I had a white turtleneck onsie already so I got the red/blue felt and cut the shapes out and used double-sided tape to apply them to the shirt. I just used some blue pants we already had and took an old pair of red socks to cover his shoes.