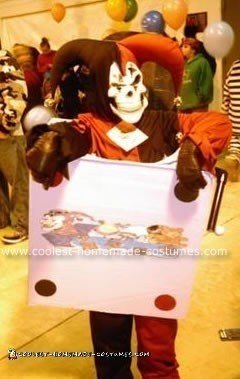 My son had a Jester costume for trick or treat this year but I decided why not make him look like a Jack in the Box instead of a plain Jester. So I ran around to lots of stores and finally found the right shape box to to fit my 8 year old son.

His dad cut the top out in a circle type shape to make the lid that pops up and took a straight piece of cardboard to make it stand up straight.
I then painted the whole box, each side being a different color and also different color circles on each side. Made swirl lines on the top of the box where the lid was.

I printed and cut out a question mark symbol in a dark pink and hot glued it to the outside of the lid that showed on his back. Then I printed two letters off, one D and one W (which is his initials also. And I hot glued one letter on each side of the box. We made a picture for the front that says Jack with toys around it for the whole “Jack in the box costume”.

The crank on the side was some PVC pipe with the L shaped bracket to make it look right. Then I painted a ping pong ball and painted it light purple and hot glued it to the side of the PVC pipe for the ball on the crank. I took some rope and ran it through the back so that he could wear it like suspenders on his shoulders which was covered by his Jester shirt. I painted the rope on the back the same color as that side of the box so that is wasn’t noticeable.

He got a lot of compliments for his Jack in the box costume. Also he won first place for his age group at the local Halloween bash. The box was free, the paints I already had, also had the PVC pipe and ball. So total over all cost was free. And very easy and fast to make, only took a couple hours once the paint was done, drying it took no time to add the final touches.