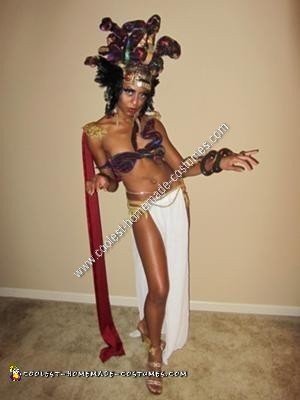 Who knew a baseball cap could turn into this?! I honestly didn’t know exactly how this whole Homemade Golden Medusa Halloween Costume was going to turn out in the end, but I knew I wanted it to be extravagant to say the least!

The first step in the process was making the headpiece which required a lot of creating, brainstorming and tons of hot glue and patience! I took a black baseball cap and cut off the bill and glued gold fabric on top. Then I attached the black wings ,which I purchased at a craft store to the sides of the hat. I bought all the gold detailing, coins, and buttons from my local craft store as well. I created the crown like headdress with the ribbons, coins, and gold leaves. I figured the more I put on there the more expensive and royal it would look.

Now time for the snakes, which was the most time consuming thing I’ve EVER done! (so glad to be done with those! whew). To make the snakes I used green and purple iridescent fabric, stuffing, electrical wire, foam, Swarovski crystals, hot glue and my basic sewing skills. First step is to make the ‘snake sleeves’. I measured out how long I wanted the snakes to be; about a yard each, then I cut strips of the fabric and sewed them together to make hollow tubes. I stuffed them with the cotton stuffing and wiggled the wire through the body of the snake so that about an inch was sticking out, so I can attach the snake head to. I made 15 snakes in total, 13 for the head piece and 2 for the snake top. The heads were a lot less time consuming but
very messy!

I carved out each snake head from foam using a simple butter knife. After all the heads were carved I glued the fabric on and attached it to the wire that was sticking out of the snake body. I used a foam ring that I covered in the fabric as the base for the snakes. I attached all the snakes to the ring using hot glue and a few stitches to secure them. Now that they are all in place I can decorate them with gold and green strips of fabric for the bellies, Swarovski crystals for eyes, red felt tongues, and gold accent necklaces, all of which were just hot glued on. I left the head piece as 2 separate pieces; the gold winged base and the snake ring, that attached with some heavy duty Velcro.

I used a bra for the base of the snake top. I simply took two snakes and positioned them where I wanted them to lay on my chest, then glued them onto the bra. The cape was simple, I just took a long strip of heavy red velvet fabric and attached two loops for my arms and glued on some gold accent leaves on the shoulder area. The white skirt is made of a sheer fabric and a few gold details that were sewn on. To add the finishing touches I wore tons of gold glitter and shimmer, enormous gold earrings, a gold arm cuff and really cool eye makeup with long feather eyelashes to match the wings on the headpiece. When I was out with the costume on I channeled Medusa and gave a stone cold death stare to any man who dared to look me in the eye! It was interesting to see how people react to someone who stares at them even when they try to look away, their reactions were almost like a scared/shy puppy dog look. That made it hard to stay in character sometimes! lol.

It really was a lot of fun making the costume as well as wearing it! I hope you enjoyed my costume!
I think a great costume idea would be an Egyptian Queen or Queen of the Nile because ,like Medusa, it could be lavish and have lots of gold detailing! I also like the idea of a spin-off of Marie Antoinette, like a costume with the big tall
hair with roses attached and the huge corset dress with enormous skirt. I think both of these would be a lot of fun to make and wear! 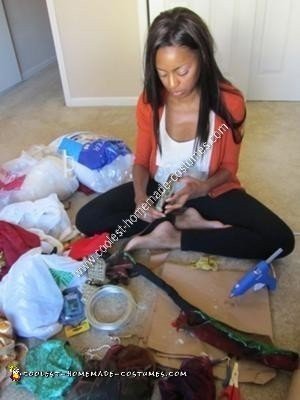 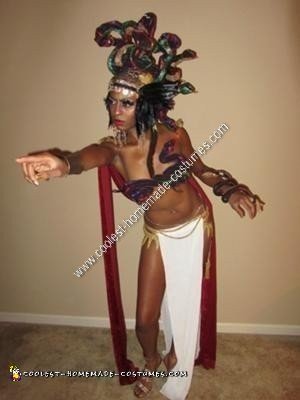 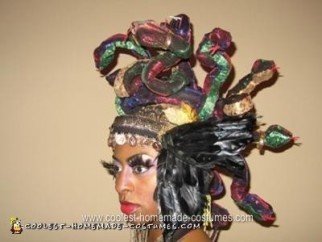 Homemade Medusa the Warrior Costume for a Woman