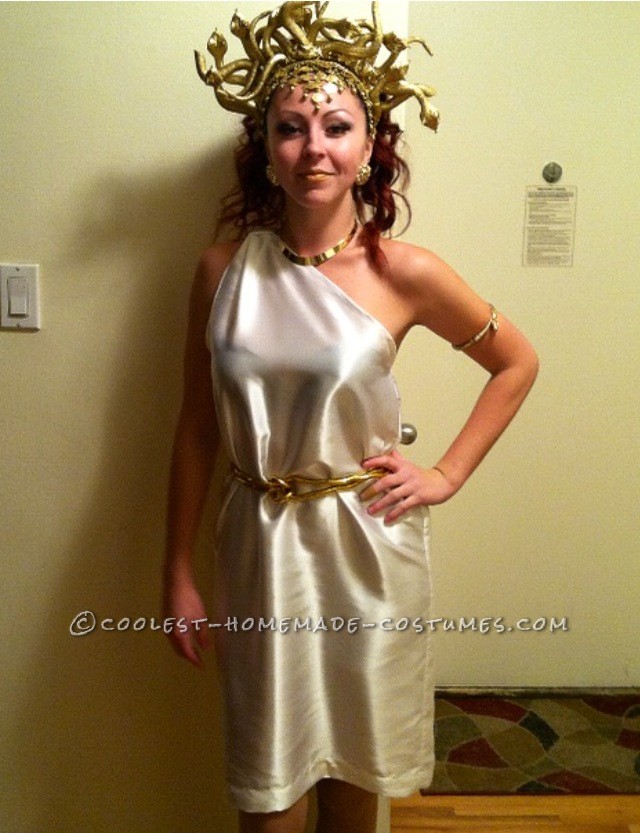 The original story of Medusa always fascinated me when I was growing up, so I decided to create my interpretation of her costume this year. After doing some research online I was going to go the route of cutting off the front of a baseball cap and then adorning it with snakes. I got a whole bunch of these fake gold coins with Ancient Greek-ish writings on them, a bunch of gold leaves and some rubber snakes but when I started playing around with placement I noticed the snakes were looking limp.

I would describe my style as bold and flashy and I already made up my mind that I wanted this Medusa costume to stay true to that and be super fierce with the snakes standing up and catching your attention immediately. After multiple failed attempts, I just sat in my bed feeling defeated and seriously contemplated *gasp* buying a Party City costume. I love the feeling of crafting my own things and knowing that nobody else will show up in what I wore. Even contemplating buying a costume from Party City felt like rock bottom to me.

In the end I just made myself a nice cocktail and sat down to brainstorm. Eventually, the idea popped into my head to use a headband. I had an old pair of those Minnie Mouse Ears from Disney World and since those headbands are super sturdy, I decided to rip off the ears and use the basic headband as my base. I used gold spray paint to lay out the snakes and cover them front to back (snakes were initially orange, but I wanted to go for a super glam gold “Versace” logo Medusa look). I cut the snakes into thirds (heads, tails, middle body) and just started gluing. In hindsight I may have been able to find a better adhesive than hot glue for this, but I had two packs of glue sticks and ultimately just worked with what I already had available from past craft projects. The gluing was probably the most annoying part for me. It required a LOT of patience, and about three-four times I had to rip off the snake and do it over. Hot gluing took a lot of patience because I had to secure the snake part by covering each side of it with hot glue and since the headband is only so wide, I winded up having to do only two sides at a time to keep the hot glue from running over and oozing off the headband.

Once all the snakes were attached I just reinforced with some gold floral wire and gave everything a final coat of gold spray paint to cover up any glue that was showing. The dress was made from about two yards of fabric. I chose a nice  white satin-looking one because keeping up with the whole flashy Versace theme, I thought it would be more aesthetically pleasing than a plain white bed-sheet. The coin headband that I wore in front of the snake headpiece was store bought for $5. I wasn’t sure what I was going to do with it at the time or if I was even going to use it in this costume at all but honestly it just looked cool and I am a very impulsive shopper. The headpiece took a bit of getting used to on my head (the snakes added weight to it) but the coin headband actually provided perfect support for the snakes and I was able to dance the night away. :-)

The snake bangle on my arm and gold earrings were just something I already had, and the necklace I bought from H&M for $4.95. The belt was two necklaces I bought for $1.50 each and since they were really stiff, they were easy to bend into a makeshift belt.

My mom and sister did my makeup because at 25 years old, I only discovered what contouring in makeup meant about a week ago. :P

I’m very pleased with how it all came together but now I am left wondering how exactly I will top this next Halloween. 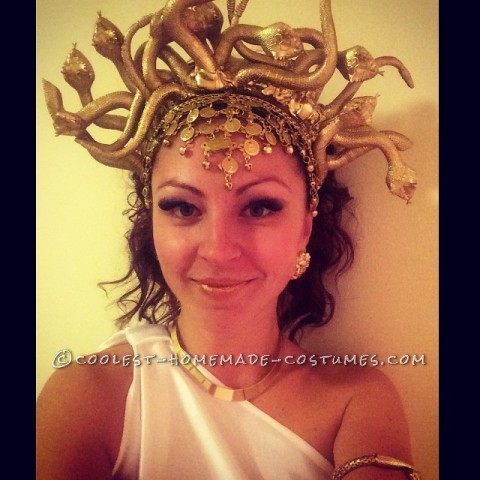 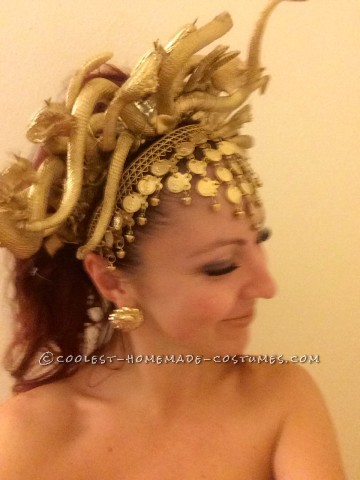