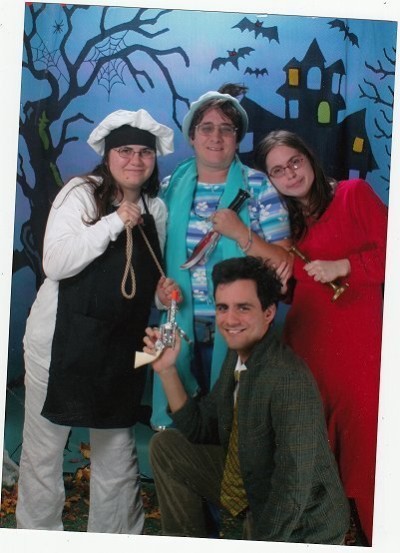 Every year we participate in an area costume contest, individually, and lose to a family group. We decided to have some fun losing by doing our own family group, but on the cheap side. Brainstorming during a power outage, as we played Clue, we hit upon the perfect idea.

My eldest daughter already had a long sleeve red dress, that she had gotten for about $4 at Goodwill the previous year. She wore red sneakers, and a pair of red pants, underneath to keep warm. Becoming Miss. Scarlet her way, with a candlestick that cost $1 (for the pair).

My son wanted to be Mr. Green, so we waited until just before St. Paddy’s Day to head to Goodwill. There we found these green pants, jacket, and necktie right up front. The white dress shirt is borrowed from his dad. All together, he spent about $10 on the outfit. He also has sneakers on, to run away when the cops catch him out he says LOL! The gun is from Amazon, one of those children’s western gun and holster sets for about $10 (for two guns with holsters).

My youngest wanted to be a cook, and I remembered Mrs. White as being a cook. Which she was at first, though I think now she’s either a maid, nanny, or black widow. Anyway, we got the white shirt and pants from Goodwill for $7. After a Google search I found the cook’s hat and apron online for about $15, on sale, but can’t remember where. She also wore sneakers, and the ‘curtain’ hangman’s noose is a small piece of robe found in Marden’s fabric section for about $1.

I had the blue outfit already as I had put it together for my trip to Egypt. The shirts and pants were bought at Goodwill for $8. The dupatta scarf was bought off of eBay for about $15 with shipping. The hat is a french baret found after a Google search, and cost about $20 with shipping. The nice knife with a little bit of fake blood on the end I got at a party for about $8. This was the most expensive of the set, but as I used everything, except the knife, more than once it was worth it.

No one knew we were dressed up until the contest when we walked on stage. The other family, that always won, had their cute little baby dressed up as Dorothy with Dad as the lion, mom as the scarecrow, puppy as Toto, and five year old as the tin man. We figured we didn’t stand a chance, but acted out our parts as we paraded before the judges. My son hid his gun behind his back, my youngest cackled with her noose hung high, my eldest swinging her candlestick, and I just trying to innocent as I pretended that the knife didn’t exist. We heard people talk about what a cute idea we had, and how novel in that it hadn’t been done before, as we exited the stage. Come the announcement of winners, we were surprised when the other family only got second, but actually happy to be waiting to see what single costume had won (the category we were all in was the 18 and over, there is no group category) as we wondered who the judges thought had outdone them. Imagine our surprise to find out it was us! Our prize, this group picture and a $25 gift certificate to the mall. 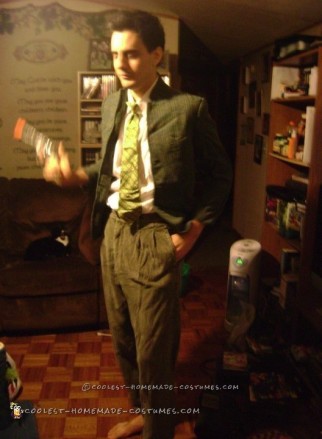 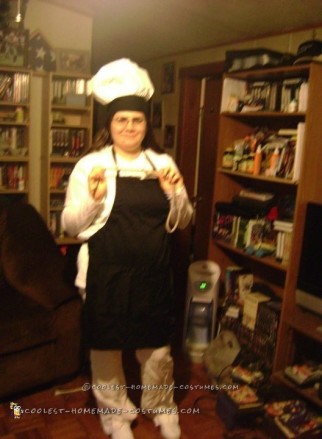 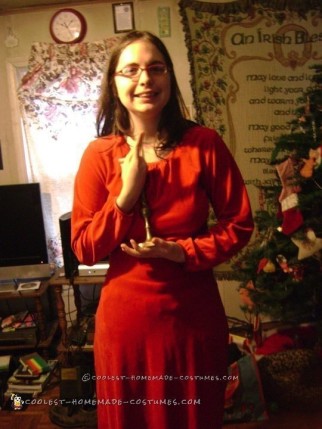