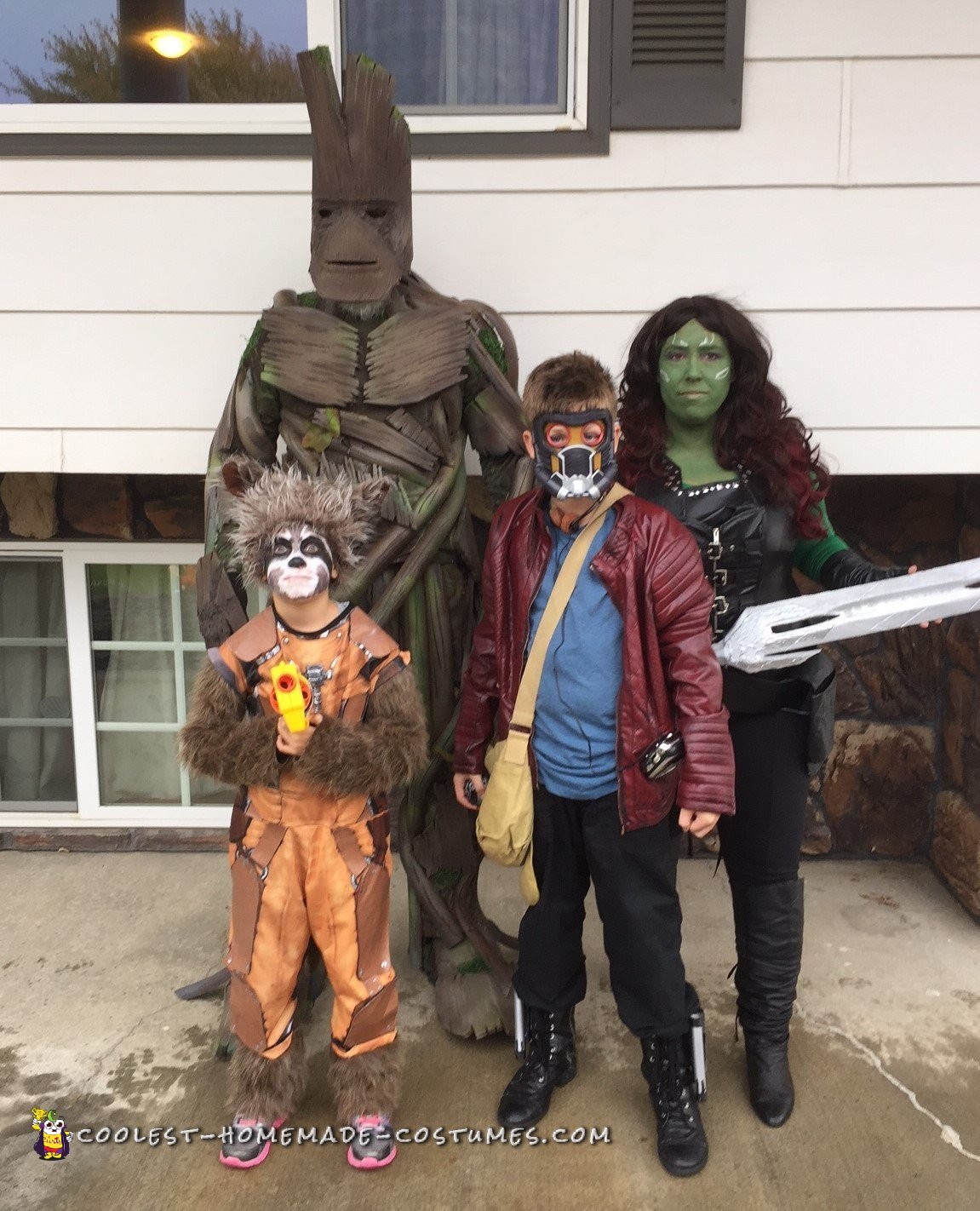 Our family loves the movie Guardians of the Galaxy, so it was a given we would convince our kids this was the Halloween theme we needed to go with. We’ve been dressing up as a family since the kids were born, and each year our costumes get more elaborate. From our Guardians of the Galaxy family costume, my husband’s Groot costume took the most time, so I’ll explain the steps he took to build it.

First, he did a lot of research online and found others who have made the costume, so he took ideas from several sources and began his building. He started by finding coveralls at a second-hand store, and we all took turns wrapping him in duct tape over the coveralls to make a mold of his body.

We cut it down the back and this is what he used to work with. He stuffed the coveralls to have a good form of his body to work over. Nextת he found camouflage pants and shirt (this was more difficult than anticipated due to our budget). We then found pipe insulation and foam floor mats at the local hardware stores. This will later be used to make the tree branches of Groot.

Using the high setting of the glue gun WILL melt the pipe insulation….. this was a little setback because several pieces had to be taken off and re-glued. After all the foam was glued, it was time to spray paint the costume. We used 4 to 5 different colors of brown, green, and black to give it more depth and texture. He used an old pair of shoes and glued several layers of foam to the bottom to give Groot extra height. The foam floor mat was used to cover the top of the shoes.

Groot’s mask was cut out and carved from the floor foam. We tried buying a Groot mask, but we weren’t happy with the way it looked, and though we’d come this far making the entire costume, why not keep going! Groot’s mask was glued in the back with crafting glue, and multiple fittings to get it to sit on his head correctly. After several tries and fittings, we used the same spray paint on the mask to match the costume. After the costume was close to being finished, we let the kids glue on moss and leaves from the craft store.
All my husband said Halloween night was “I AM GROOT!”

So, the other parts of our Guardians of the Galaxy family costume were made from thrift store finds and clothes we had around the house. My son was Starlord, and we couldn’t find the correct color of the leather jacket. I found a black jacket at a thrift store, and we used vinyl paint. And we got it looking pretty close to the movie.

My son had an old Pokeball he painted and used as the Orb. He put a glow stick in the Orb so it would glow when it was opened. We found the mask online. My son made rocket blasters out of foam and paint. Then he glued Velcro to his boots and the rocket blasters, so they could come off easily. Finding an old Walkman was more difficult than I thought. I put the word out, and a childhood friend from the 80’s had one in storage and came to the rescue.

My daughter was Rocket Raccoon. We had the fur hat already so it was a perfect addition and match for her costume. We ordered a rocket costume to use as a template. Then we cut out pieces of the costume and found fake fur and leather and puff paint to make the rest of Rocket. She used a Nerf gun as her weapon.

I went as Gamora. Mine was pretty easy. I found the pants and leather top at thrift stores. I already had the black boots. Also, my husband made my sword out of foam and spray paint.

Reactions to our Guardians of the Galaxy Family Costume

In conclusion, our Guardians of the Galaxy family costume was pretty fun to make and wear. On Halloween night we were stopped several times and asked if they can take a pic with us. Only a few kids were scared of Groot, but that was when he blended in with the trees on a walking path of the trick-or-treaters. He may or may not have done that on purpose. :-) 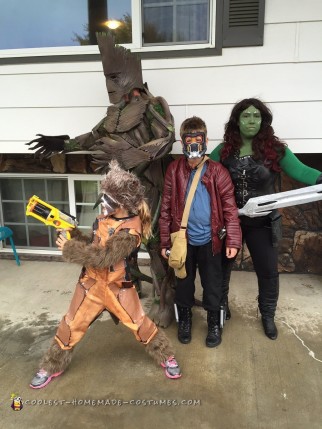 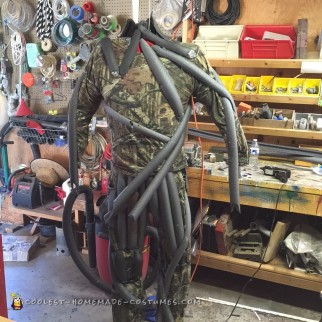 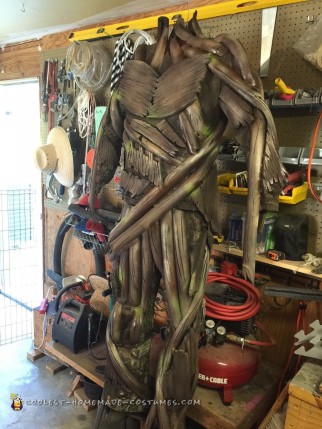 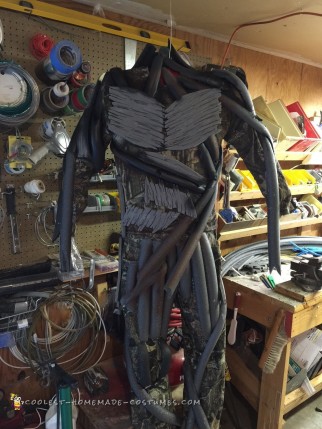 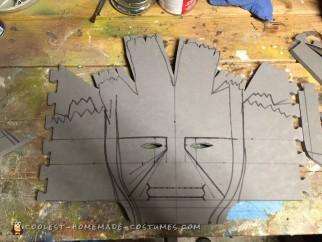 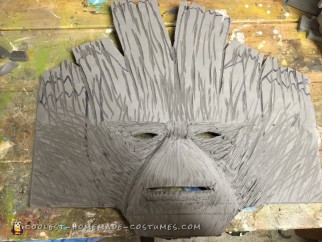 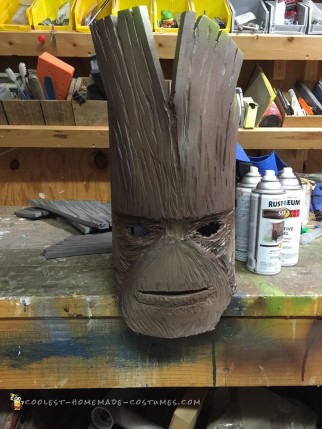 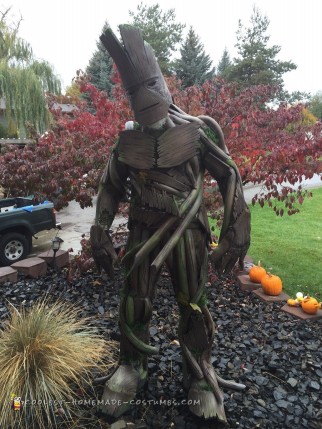 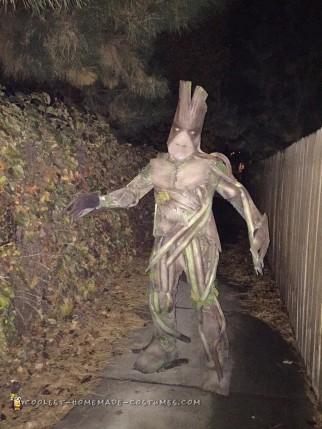 Epic DIY Groot Costume From Guardians of the Galaxy