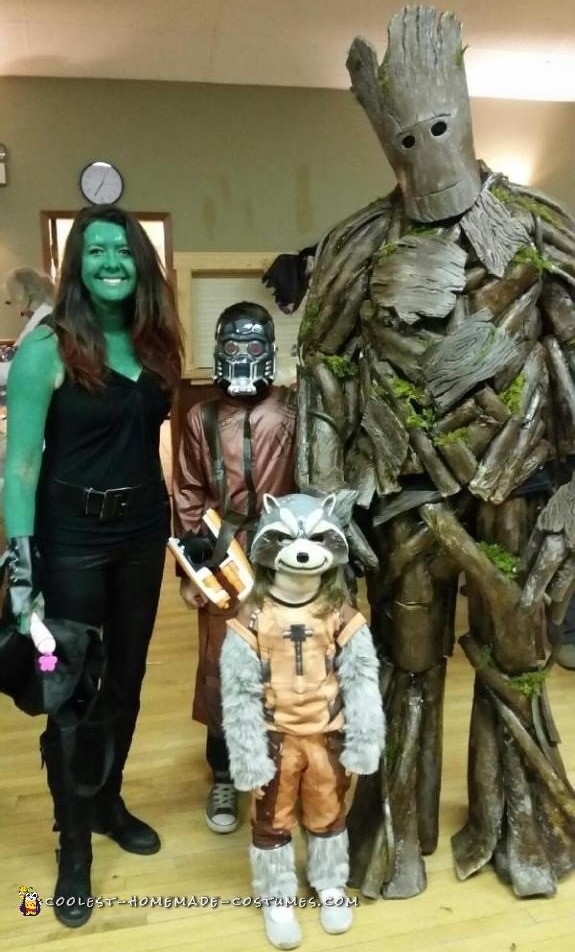 My wife saw this idea on Pinterest and at the beginning of October, decided she was going to make it. Then we’d all go to our local Halloween Party as the Guardians of the Galaxy. I love my wife – she is very creative and artistic, but I didn’t think this was possible. But – she continues to amaze me. For the Groot costume, it helps that I’m naturally 6’7. So we had to make this one XL!

We initially struggled with what to use as a stand as mannequins were like $150-$300! But I ended up finding one on Kijiji (local classifed/buy&sell site) for $20. The problem was the mannequin wasn’t the same size as me – but it worked. She started with using pipe foam insulation to make the initial long root pieces, and used a hot glue gun to attach it to a cheap workout shirt and pants.

We soon realized that difficult getting it on and off the mannequin (and me!). So we split the back of the upper part and just used a strong velcro to hold it together. Once all of the pipe foam was attached, she used a paper mache mixture with tissue paper to give the texture. However, after the first ‘fitting’, and I tried moving around, we realized the paper mache wasn’t sticking well to the foam. She then found some spray adhesive (3M) that worked better.

Once we got all of the tissue on, we sprayed it with a primer and then a special paint we bought at Michael’s that gave it a wood texture – followed up with hand painted touch ups with basic brown acrylic paint.

Now for the mask and other large wood prices, she used EVA foam (used typically for floor mats in play rooms). For the mask, she used a heat gun and wrapped it around. She then used a dremel to create the wood texture, and we used lenses from some old sunglasses to put in the eye slots. The other wood pieces were formed with a glue gun and dremel’d as well. For the gloves – just got some older winter gloves and attached the foam and EVA pieces to them, same process as above – tissued and painted them.

When we showed up at the community Halloween party – I quickly understood what a mascot feels like! All the kids came up and were tugging on the Groot costume – some were scared. The adults were wondering where the heck I found this costume…and the fact that it fit me! When I told them my wife made it they were blown away.

Then the next questions – ‘What is it made of? Is it hot in there? How do you go to the bathroom? It was actually not as hot as I had expected but I did take the mask off a few times as there isn’t really a breathing hole…just through the bottom of the mask. As it was a two piece suit, going to the bathroom was easy. Although, I never had to as I was sweating out most of my liquids! Most importantly, I was able to bring my hands to my face so I could drink a beer! 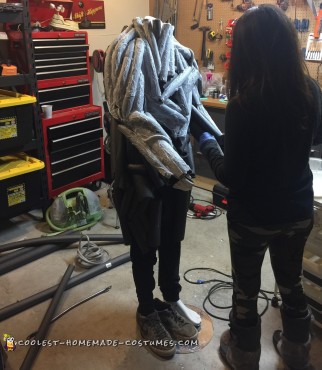 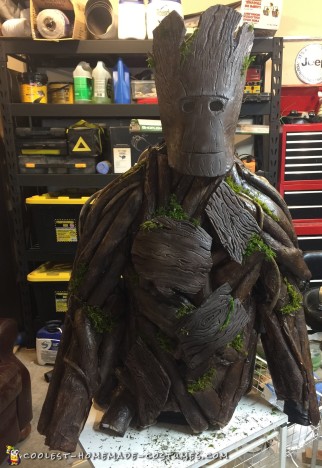 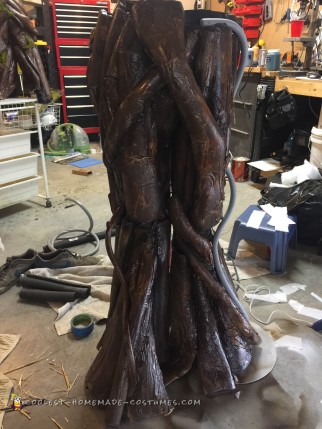 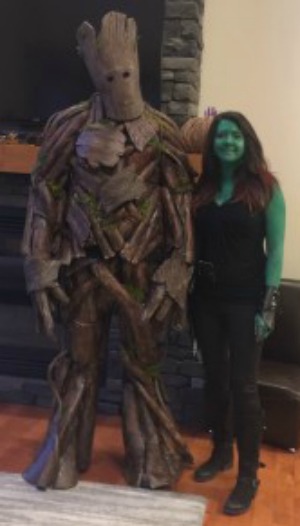 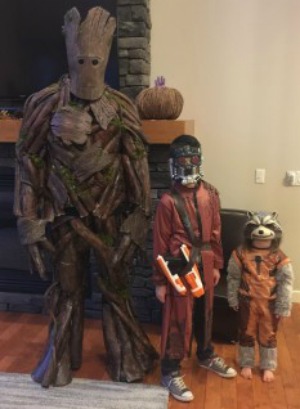