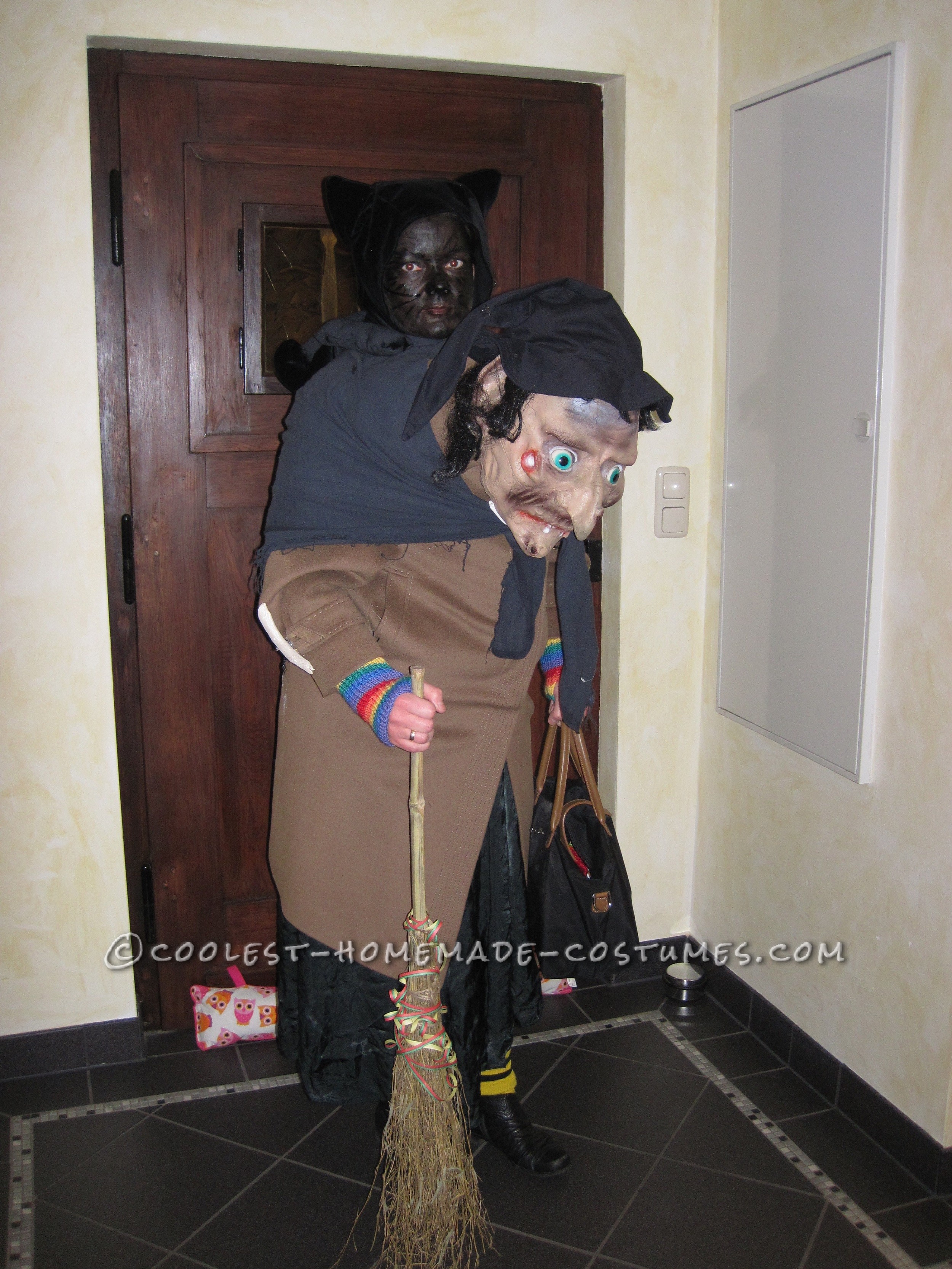 Since in Germany, where I live, Halloween is not so popular as in other countries, I made this costume for carnival, when many people in Germany wear costumes.

The idea for this costume came into my mind one night while falling asleep. Such an idea, when you are nearly gone into dreamworld but then you stay awake for the next hours, because your brain is creating a head-cinema.

Nearly all of the utensils for the costume were found on my attic.

For this costume I needed a coat, a wig, a baby carrier, a fluffy seal, diving goggles, a couch-cushion, a latex mask and jelly eyes and a witch hat. I just had to buy the eyes and the latex mask, and then I could start with my enchanting project!

On top of the latex mask, I sewed an old black hair wig and a witch hat on. Actually you can eat the jelly eyes, but they also fit exactly in the wholes from a diving goggle, where I put them in. After that,I placed the diving goggle in the mask and let the jelly eyes look through the eye holes from the mask. I had to stuff the couch-cushion in the mask, so that the mask was filled up and the goggles could not move from its place. Walpurga’s head was finished!

I took an old woman coat and cut in the back seam, big enough to put my head through. I sewed the whole witch head to the collar from the coat, just on the place, where a normal human neck should be.

To make the witch posture from an old lady, I put on a babybjörn baby carrier, so that the witch head could not fall down and the witch chest was filled up. The baby carrier itself was filled up with Robbie, the fluffy seal. Now I could put on the witch head coat. Just, that my head (before that I already applied the cat make up on my face) had to be placed on the back by putting it through the cut on the back. I also took an old, black shawl around my head and made a knot under the witch chin. I had asked my mom for a favour to sew for me the black cat head hat. On the backside from the head hat is a little cat body, so that the on the shoulder sitting cat was complete.

Last, but not least, a broom and a bag and Walpurga and Merlin were ready for party!

I went with this costume to many street carnival parades, also one of the biggest, the “Rosenmontagszug” in Cologne. Even there people were looking and laughing, taking pictures and asked me how that was created. The funny thing is, that everybody first looks to the witch head and gets  scared and then, at the second look, they recognize, that the cat is actually the real head! 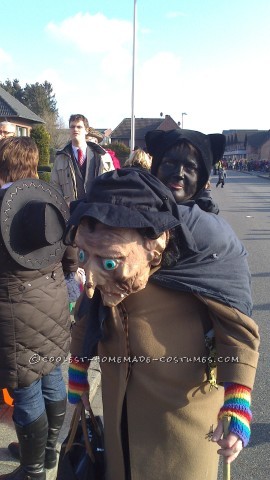 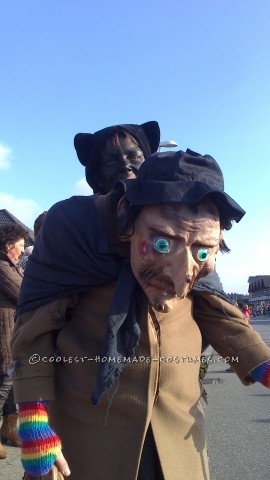 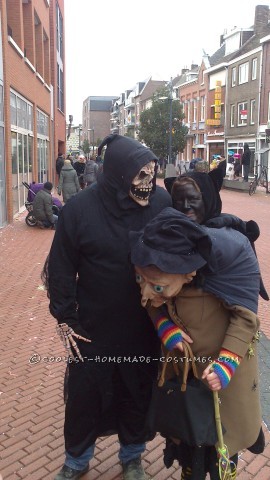 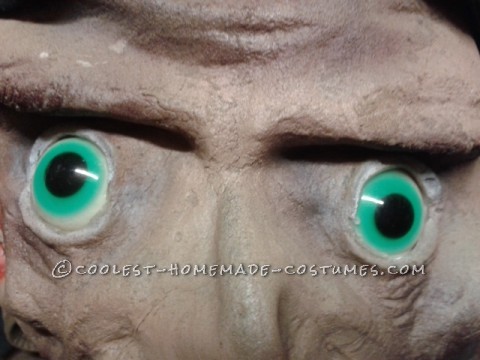 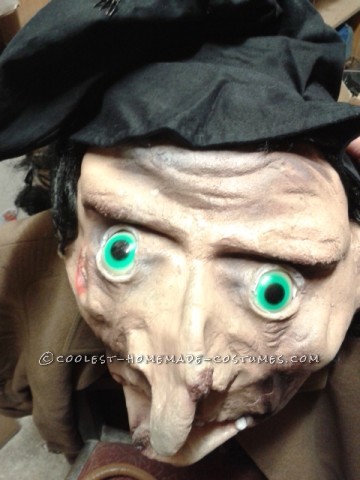 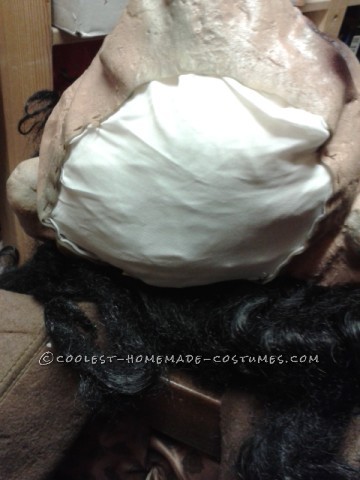 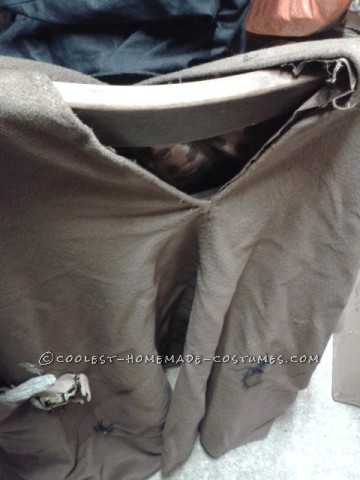 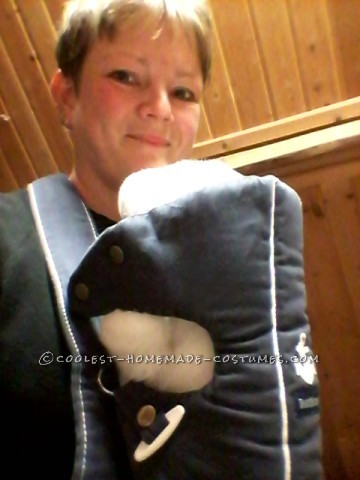