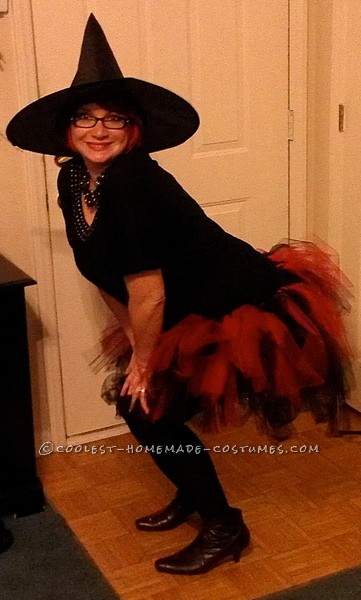 For my Halloween costume this year I knew I had several events I had to attend and wanted to have a costume that would allow me to use the same key pieces without being the same costume.  So, my husband loves to do couple costumes and we decided on a masquerade theme for our “couple costume”.   Well as with all masquerade we knew we had to have a mask but the rest of the costume can be… well pretty much anything.  I, like most people, have been obsessed with pinterest, and those really cute tutu skirts. So I knew I had to do one of those.  And I am also a little obsessed with corsets so I thought I would combine them both.

For the tutu I used a basic tutorial I found on pinterest. Measuring my waist (where I wanted to wear the skirt) subtract about 2-3 inches for the elastic.  I used black 1in wide elastic and sewed them together.  I made sure to double stitch my elastic so if I pulled on it too much it wouldn’t come apart.  I used another tutorial I saw on pinterest to measure my tulle for the tutu. I measured from my waist to where I wanted to skirt to land on my legs.  I then looked around my house for something rectangular of similar length.

I happened to find a bookshelf that came from a broken bookshelf.  I wrapped my tulle around the bookshelf until the tulle roll ran out and cut both ends.  I used several colors and a total of about 6 rolls of tulle.  I then tied the tulle around the elastic using a slipknot.  I wanted my tutu to be rather “fluffy” so I made sure to push the tulle together as much as possible while adding on more and more tulle.  If you are confused about how I did this you can search Google or pinterest for “diy no sew tutu” for a lot of great tutorials on how to do this.

Now for the top I wanted a corset. I have never ever made a corset before so I was very nervous about this part. I love the look of the Elizabethan corsets so I used this pattern marker to design my corset and basically followed all those directions.  At this point I’m reading through the directions on sewing the corset and I’m about 4 days from my first event for the costume and very concerned for timing and my beginner sewing capabilities.  So I decided I like the look but I don’t really need the boning…it’s just a costume. So I left if out.  I used a heavy red fabric I already had home and the black and white diamond fabric that I got Hobby Lobby. I used the pattern and cut it from each fabric.  I then sewed them together using a seam allowance. Easy Peasy.  Once it was sewn together it looked a little plain.

And I did want the corset look even though I did not put the boning in it so I… GULP (every time I think about this I hear my costume designer professor yelling at me) I used Tacky glue to glue down this pretty lace like trim where the boning would have went. I used pictures from Google images to be inspired where I wanted these.  Now I put the costume on and I didn’t really like where it sat and such.  So I decided I needed to have some sort of sleeves.  I mean I’m heavy chested and without boning I need a real bra and I’m nowhere near tacky enough to go which just bra straps showing so I used some red tulle from the tutu. I bunched the tulle up, measured the length from the front of the corset over my shoulder to the back. Adding about 2 inches to that for seam allowance and comfort. I sewed them to the inside by hand because I didn’t want the stitches to show through the front.  So I carefully sewed through only the inner lining.

Now the best part about the base of this costume is it’s pretty versatile.  So for my girl,s only Halloween party I decided I would make it fairy like.  I used an awesome tutorial from threadbanger.

I did the best I could with materials I had… I would definitely recommend getting some sturdy string like they talk about in the video. From my experience shoestrings are not that sturdy. But any who for one not my poor fairy wings worked. I just teased my hair and looked like I was a fairy who got spit out by a tornado.

Now for the Fall Festival at my work I knew my corset like top was a little to risqué so I just wore a black shirt with my tutu and went with the typical masquerade theme.  My husband and I found perfect masquerade masks at the local Spirit Halloween store. And I have now been transformed back to masquerade.  That same evening was my personal Halloween party and all I had to do was switch from my shirt top to my corset like top and bang back to the original masquerade theme.

And finally on Halloween night with all the trick or treaters I usually try to dress up a little. I simply put on my tutu some low pointed boots my black shirt and a witch hat. And bang now I’m a witch. I seriously had so much fun this Halloween with my versatile costume. I didn’t feel I looked the same at every event but yet I didn’t spend a fortune.  Because I had most of the materials at home, I only spent about $25 for tulle, 1 yard of fabric, puffy paint for the fairy wings, and the masquerade mask. 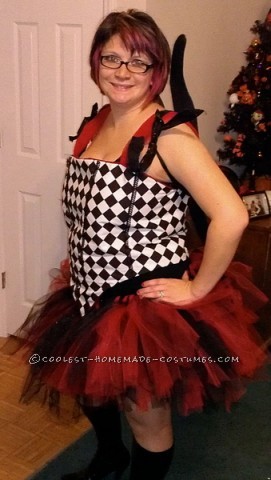 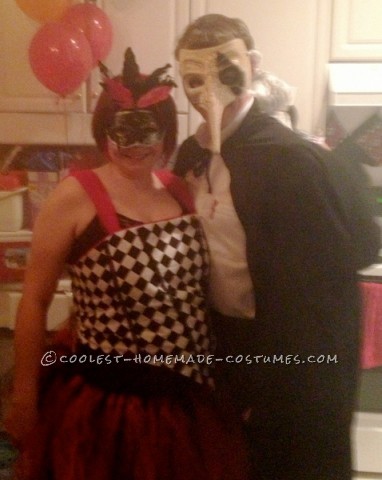