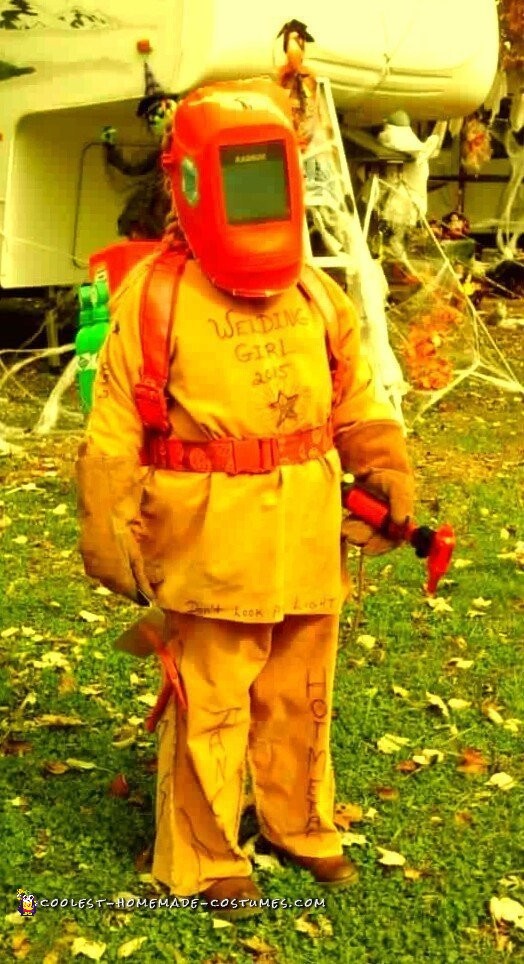 Our little niece told us last year right after Halloween camping; that she wanted to be a welder this year, this blew her Uncle’s mind. To have his little buddy want to emulate him was outstanding. Thus I began the scouting for the items we would need to accomplish this.

Her uncle is a welder so he would know everything she would need and had a picture in his mind right away.

We started finding things at the yard sales in the spring.

First, we found a kid’s mug gun, that lit up and made a vibrating sound, and a small welding helmet. Awesome find.

Next, we found the material for her welding suit at a Goodwill store. “Pleather” – 3 yards for $5.00.

We laid the material on the on the living room floor, had her lay on top of it and traced out the top and pants. She said ” Now, I know I’m going to keep my title. ”  (She had won Judge’s choice when we took her Halloween camping.) I then cut it out and the uncle used a leather punch to made the holes so I could stitch it together with twine and a toothpick. This was a site to see, I had to tape the twine to a toothpick and thread it thru each little hole. The suit was done except for some small details.

Then we got some foam poster board, measured her back to see how large we could make her welding suitcase to carry on her back. He cut the foam into 2 square pieces  and 4 rectangular pieces for the sides.

He, then taped all the pieces together to form a case. In the meantime, we found an old welding helmet which fit her head to a tee. We also  found a pair of old welding gloves.

The next step was to have her paint the case, helmet and a small tack hammer{slag hammer} fluorescent pink. She got some on her fingernails, but that was OK because that’s what is in style.

One Saturday morning we found a pair of brown boots that looked like steel tips, which we bought for $2.00.

Last but not least, we found what was a reflector belt with pumpkins on it,  to hook the welder onto her back; this was also painted fluorescent pink.

Now came time to start working on the small details to trick out her costume. My husband wanted to light up the whip, like wire and hook it to the mug gun. So off we went to the fabric store to get some moon lights and some purple tubing.

He had some extra foam poster board,so he made the reel for her wire along with a cardboard tube for the center. Also, we found a plastic dish the was used as a strained; that we used for the fan cover.  Finally we used two “Ice” bottles as Argon bottles, which had two vitamin bottle lids taped together and taped onto the top of the plastic bottles as pressure gauges. We got to drink some of the accessories. These items we painted fluorescent  green to make them pop!

Time to put everything together:

This costume looks awesome at night and also makes our little buddy very visible at night. Elizabeth said it also helps her Daddy in heaven to see her more clearly, because of all the kids out trick and treating.

Everyone who has seen this costume have been astonished at the creativity, detail and originality whichever  has taken placed.  This past weekend,  she was in a Halloween costume contest and walked away with Judge’s Choice. We also took her out to our high school for trick or treating,  she got comments such as outstanding costume, that’s really unique, great job, your “really electric” from her peers as well as high school athletics, teachers and parents.

Now, we are waiting to find out what she wants to do next year. 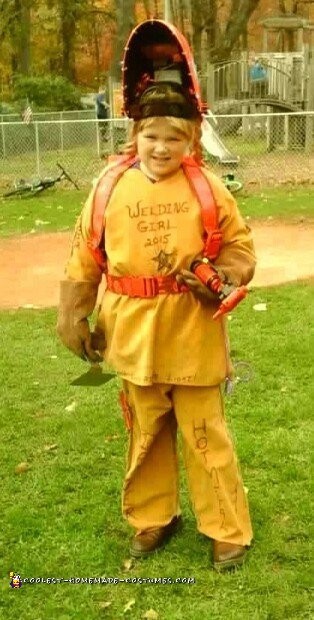 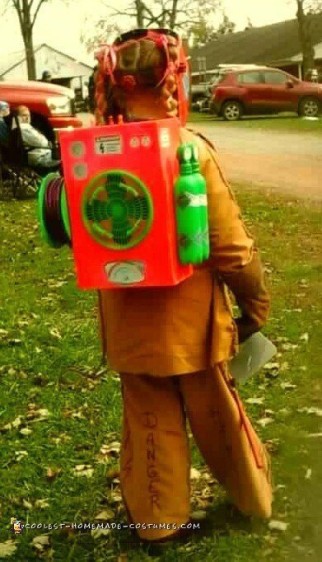 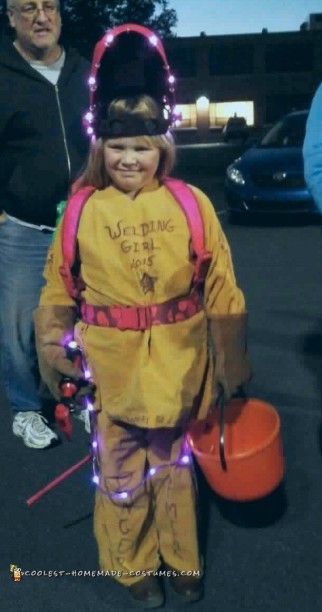 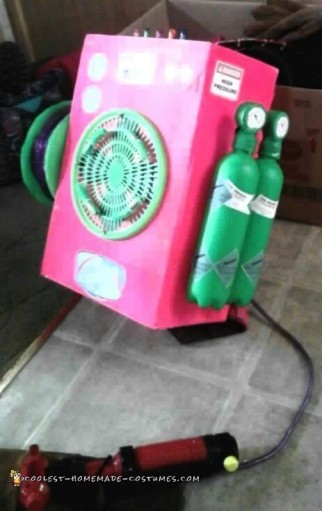 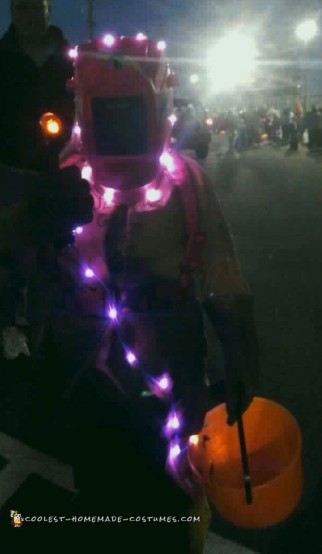 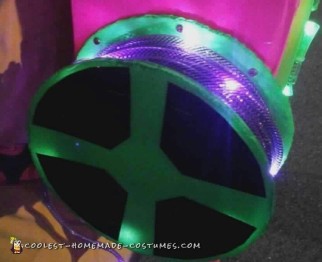