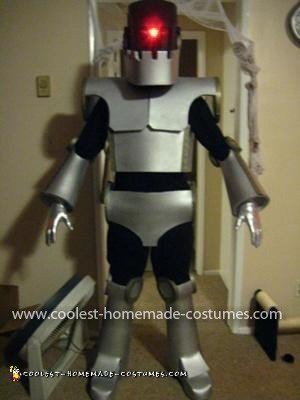 My girlfriend and I decided to do a vintage sci-fi theme this Halloween, and I started by scouring the internet for ideas for my robot costume. The ideas submitted by so many creative folks for a Homemade Vintage Sci-Fi Robot Costume to your site were a huge help, and it’s my honor to return the favor as much as I can.

After finding a number of photos of older sci-fi robots and watching a movie or two (Metropolis is great for costume research), I sat down to sketch out a robot I could craft. I knew we would be attending a masquerade ball with plenty of dancing, so my robot had to be mobile. I wanted to be able to drink in my costume, so a flip-up welding helmet formed the base of my robot’s head. I’ve always liked those masks with one-way visibility (phantom-looking things with dark fabric where you can see out but not in), and I knew I wanted a big red light for the eye. Accenting the silver metal paint with copper “brackets” made the final touch, and I basically had my design ready. The “antenna” you see didn’t make it to the final design, as it looked a too modern and was more work to attach than it was worth.

For the record, I did not intentionally copy any particular robot from a movie, cartoon, comic, etc. Many people have commented that they swear they’ve seen this robot before, but just can’t put their finger on a name/source. I’ve even said the same thing myself a few times, but I’m pretty convinced that my robot design is about as original as anything can be. I count among my influences: Guts Man (of Mega Man fame), The Iron Giant, Gorm (The Day the Earth Stood Still), the robot from Captain EO, the robot from Metropolis, and a number of excellent original designs on this very site. I’ve been told I could be a Cylon, but I’ve never seen an episode of Battlestar Galactica and can’t really verify that. If, however, you do find the particular robot that this costume really looks like, I’d love to see it.

The individual pieces are made from Anti-Fatigue Foam Mat, with the entire costume requiring 9 sheets (25″ by 25″ each). To make each piece, I measured my own relevant dimensions with a measuring tape and sketched out the basic shape to get the math all situated. Unfolding the truncated cone shapes that made up the arms and legs was a nasty reminder of how long it’s been since I took a basic geometry class, but I got through it. Each piece was prototyped on poster board, taped together with masking tape for testing, and then traced to the foam and cut out with an X-ACTO knife. A hairdryer was used to heat form the foam into shape, and then held together with hot glue.

This video from DIY pros at Backyard FX was indispensable in learning the necessary techniques:

Following advice from folks who use this same foam for Halo or Mass Effect armor, I first coated the foam in Plasti Dip. I used the spray paint version in black, but I’ve heard that the paintable one can work as well or better. A coat of metallic silver spray paint gave them the perfect metal look. Even my least-careful cuts looked much like roughly cut iron and the hot glued seams were surprisingly perfect imitations of welding work.

The copper details along the edges were cut out of thinner craft foam. A compass was necessary to get a precise, uniform look. I used a hole punch make the “bolts” out of the same foam, and attached those with Tacky Glue so as to adjust them as I went along and get the spacing just right. The circles were joined to their edges (strips of 3/4″ craft foam) at a right angle with hot glue very slowly and carefully so as to make the cleanest possible seam. These were also base coated with Plasti Dip and then painted with a “hammered metal” spray paint for a great effect. I wasn’t able to find enough black craft foam, so I fixed the unsightly orange and green edges that survived painting with a Sharpie.

The helmet was built from a Tooluxe welding helmet, chosen largely for the flip-up design and the extra-large viewing area. I removed the darkened filter (way too dark to see through under normal conditions) and added a sheet of semi-sheer black fabric behind the clear plastic. A head mounted work light with a red LED was velcroed (so I could replace the batteries as needed) into the inside of the helmet, facing out. A cheap balaclava mask covered the rest of my head so as not to spoil the illusion. The jaw was attached with hot glue after it was painted.

The robot’s feet were made by taking an old pair of sneakers and hot gluing foam to them in the right shape. Tracing out the shoes onto posterboard was helpful, and the whole thing got Plasti Dipped and painted just like all the other pieces.

The hands are shiny silver costume gloves (Dreamgirls brand, surprisingly stretchy, even for my larger hands), hot glued into foam circles that friction-fit into the arm pieces. I attached them by saving the hole cut out of the larger circle, then squeezing that piece into the glove before I started gluing. Once the glue was dry, I removed the circle inside the glove and had a perfect fit. I saved the circles for painting as well, where I used them to cover the inside-out gloves so they didn’t get paint on them. I had considered more claw-like hands early on, but decided on this solution for better usability and, I think, a more vintage sci-fi look.

While I’ve yet to find any videos of us dancing at the masquerade last night (and I’m not sure I want to share them if I do?), here’s an early video of me walking in my assembled costume for the first time:

What’s particularly great about this is that you can see the foam pieces before being painted, as well as the small mountain of cut foam and posterboard on the floor to my left. I’ll try to find a video of the finished costume in action and leave a link in the comments section so long as that’s cool.

Aside from the various sources of inspiration, I have a number of people to thank for the final results here. My girlfriend, Caroline, for putting up with losing half of our living room to foam and construction tools. My friend and armorer, Torin, who taught me the skills to craft actual leather and steel armor, without which I would’ve never been able to pull this off. My sister, Nora, for helping me to finish the detail pieces at just about the last minute. And our cat, Oswald, for being such a good “helper” as evidenced in this video:

As a final note, I highly doubt that this foam is flame resistant at all, and would bet that the spray paint and Plasti Dip propellant only add to the flamibility. If you build something using this stuff, please exercise extreme caution around any flame or heat source. Thank you for reading, and best of luck on your own costume crafting endeavors. 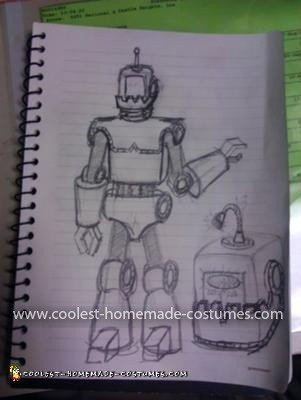 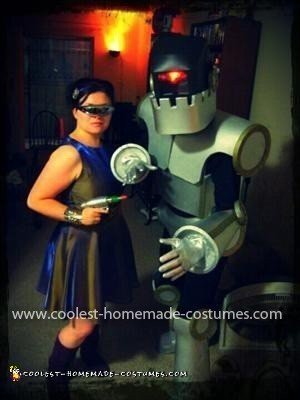 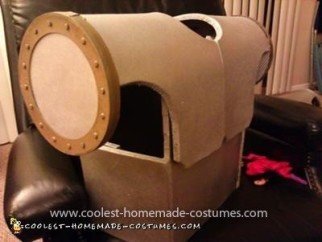