Rob Ott is his name… and this year I decided to take this homemade robot to the next level. In 2009, I made a cardboard robot costume for Halloween in about 4 days. I hooked up LEDs and a few lighted switches and some Christmas lights. It turned out to be a smash at all the parties and had lines of people taking pictures with me the entire night. So I thought to myself, what if I ACTUALLY spent some more of my time and money into a project like this? I started browsing sites like https://www.coolest-homemade-costumes.com and looking at other robot costumes to see what neat ideas other people had on their own robot costumes. I started taking my own spin on things and from what I learned about my cardboard robot last year, how I could make this the most amazing and coolest homemade robot costume ever created.

So I started borrowing some of my dad’s tools and going to the craft stores, hardware stores, hobby shops, online LED manufactures, the works. I salvaged all the extra materials I used on my cardboard costume and started building in April 2010. This was a hobby that quickly turned into an obsession, especially after I obtained a large 12v battery and started teaching myself how to actually wire these parts. (I swear that I am not an engineer, I’m just you’re average nerd) I then found myself sizing up anything and everything lying around my house and stores that could be a robotic or computer like part that I could use on my costume. I had a lot of fun doing that.

I have many features that I included in my costume. I tried to keep my costume lights in the Red Green Blue (RGB) color scale because the million color LEDS I used also fade between those three colors. Because I was going all out on my costume I needed to make sure that this was going to last longer than a weekend cardboard robot. So I built the entire costume out of some thin plywood and hot glued shiny silver fabric materials all over it. I used electrical wire to decorate the robot and give the whole costume that “digital computer circuitry look” on it from head to toe. The costume all together weighs in at a whopping 58lbs! It’s not very comfortable and so far the longest I’ve been able to wear it for is about 3 hours. Now, for the fine details I will start from top to bottom-

HAIR – made out of fiber optics with multi-colored LEDs installed beneath them.

EYES- 2 cheap diamond paperweights that I picked up from a craft store with flexible ‘million color’ led strips behind them.

EARS- two speakers that hook up to my iPhone in the back of my head, playing out music while displaying a screen saver app for looks.

BOW TIE- carefully crafted out of old electronic parts and hotglue mounted onto an old computer fan, individually triggered to spin around on command with multi-colored LEDs backlighting the spinning bowtie.

HEAD(lights) I have a sound activated transformer located right where my actual mouth is inside the costume so when I talk the 12 inch red cathodes on the side of my head light up! This was a very cool and fun effect to have on the costume. There is a knob on the side of my head that controls the sensitivity of the sound activated transformer. The back of the head has some mini 12v lamp lights and a lighted switch that I picked up from radio shack. There is also a LED computer fan which I installed in the back, to keep my head cool of course, lol! The head itself has an extending coord that comes out of the back of my body that powers it. I have a black piece of fabric over the robots mouth where I actually see out of when walking around.

BODY – this is the powerhouse of “Rob Ott.” I have another diamond paperweight that I put inside of an old wasabi pea’s can with a flexible led strip behind it. This gives it an ‘arc reactor/iron man’ look. I have a total of 11 lighted switches on the body alone controlling individual lights and a master power switch so I can “power down” for dance battles! :- ) across the ‘collar’ area of the robot is a ‘liquid’ neon cathode. It looks like those plasma balls you put your hand on and the lighting shoots towards your hand, except this is a 12 inch tube that goes from one side to the other.

I attached a bunch of old computer parts, mother boards, video cards, sticks of ram (and I even hooked the old fans on these components to the main battery powering this costume… they still spin!!! A minor detail but a real impressive detail for sure!) I covered a bunch of the computer parts with some plexi-glass I picked up from the hardware store really cheap. It makes my robot actually look like a working computer! There is also a cheap fan I got at the fair that actually displays and spins words I decided to put on the front of the costume-this actually is the only part of the body that ran on its own AA batteries-But according to my mother, it’s her favorite part!

There is also a blue underglow that I put underneath my stomach and shoulders which looks awesome as well.
The antenna that comes out of the back of my costume is an old cat toy. I ripped the bells off of it and put a red light on top of it. It’s super sturdy and wobbles around like crazy!!! Looks very neat when I walk around and it bobbles back and forth.

ARMS- my arm bands are made out of craft sticks, duct tape, and soda bottles which I covered with the same fabric I put all over the body of my costume. I put a light fabric on top of two hidden cathodes (one 4 inch green, one 12 inch blue) on each arm which have a hidden trigger I can activate when pressing down on my thumbs on each hand. This is one of the coolest features of my costume! It’s like I have these lasers I can shoot off whenever I want, and it’s really neat to show off to everyone when I use them! Plus it’s just fun to shoot them off! Haha, both arms are connected to cords that come out of my back and around to my hands. This way I can ‘plug in’ to the main power source just like my head would.

“JOYSTICK” – this was a joke at first, but I have an old joystick that I modified so that the buttons control a loud beep and/or vibrates. It’s my ‘controls’

BOOTS- this was very simple by this point in my costume. I used some old rain boots and I built a wooden design which I fastened to the boots with washers and screws. Makes a very sturdy robotic design! Each boot runs on its on 12v power source (8 rechargeable batteries each) with a single lighted switch on each boot. I didn’t want to have cords connected to my feet, it would have made it too hard to walk around. Each boot has 2 red 4” cathodes, 1 blue 4” cathode, 1 green 4” cathode . There is also two other lights on the front of each boot. I melted some plexi-glass I had left over to fit over the 2 red 4” cathodes on the outside of the boot so that they can withstand any serious bumps or kicks if that should happen. It looks really professional but I just molded them with oven mits and it was really easy! I’m really happy with the way they came out, they look like rocket boots!

MISC.- I also just made some bicep arm bands and some thigh pads. Nothing fancy, just the same shiny fabric, computer parts, Velcro. The good stuff. I’m also wearing my girlfriends spandex tights on my legs and an under armor shirt, lol.

That’s all I really have to say about my costume that I can think about. I’m ready to start building Rob Ott version 3 for 2011!

Here’s a quick HD video of my costume with all the lights on! You can also hear the music playing out of my robot ears:

Here’s a video of my costume at the costume competition at the Casino I competed at last weekend! You can see me beep my joystick, my voice activated lights on my head, and activate my spinning bowtie.

This is a video a friend of mine took at this dance club. You can see my sound activated lights on my head lighting up with the beat of the music, and you can also see me use my master power switch @ about 40 seconds in for a fun “reboot” dance move! Hahaha

This here is my first trial run with the whole costume. You can hear the music coming out of the ears, voice activated lights, and spinning bowtie. 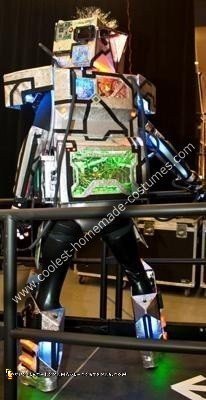 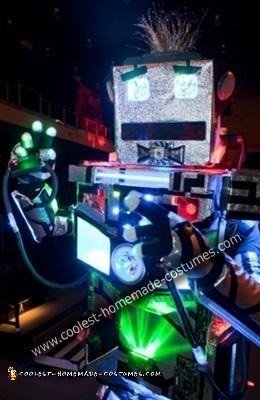 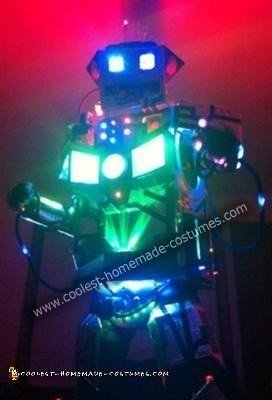