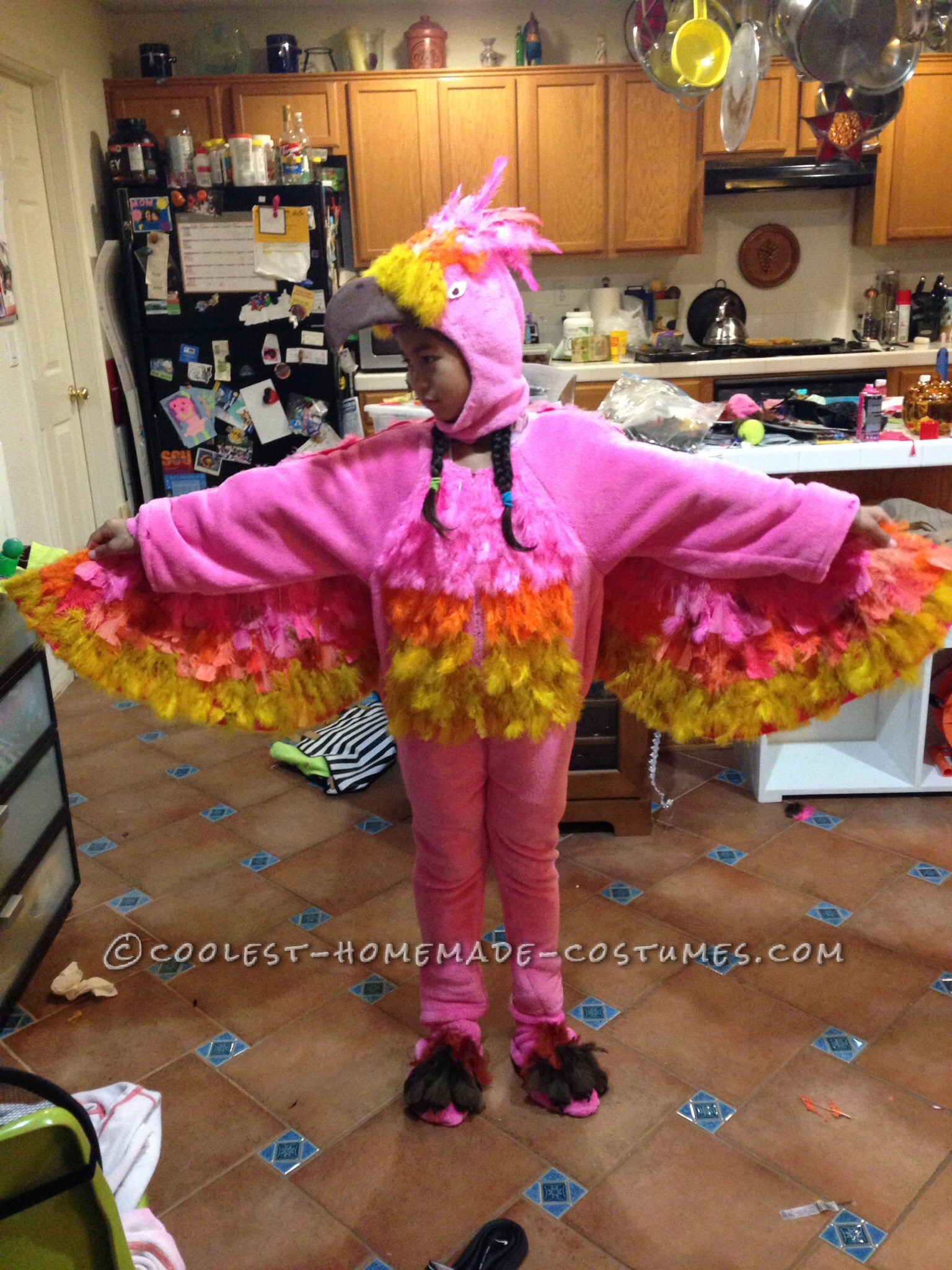 My daughter wanted me to make her a colorful hot pink phoenix costume for Halloween.  I really didn’t want to purchase more fabric or make yet another costume that would fill up her closet.  I remembered that I made her a Wilbur the Pig costume last year in the same color she wanted for this years costume.  I had a bright idea of just recycling last years costume and using it as the base for this years.   It had all the pieces I needed, a full body suit, shoe covers and a headpiece.

The first thing I had to do was remove everything that made it look like a pig. Ears, snout, eyes, nails and tail were all carefully removed. Now I had to make the body suit look more like the shape of a bird instead of a pyjama. I decided to take in the legs and make them thinner than the rest of the suit. I left the “breast” area big so that it would resemble the “breast” of a bird.

I then used some left over feathers and colored hairspray to “dye” the feathers pink and orange. I also bought more dyed feathers since I did not have enough for what I envisioned. I added these to the breast area in a graduated color scheme. It looked pretty cool so I continued with this pattern of feathers throughout the whole costume. This step was very messy! I had colored hairspray all over my floor and my hands. The feathers also left a lot of fluff everywhere. I would find feather fluff floating in my sink, kitchen table and floor. I also kept finding feather fluff in my hair!

The wings were made from one piece of felt. This was then covered with feathers and attached to the body suit. I wanted my daughter to be able to flap the wings which is why I wanted it to be one piece instead of two separate wings. It would have taken too much engineering and time to make two separate wings. I only had 1.5 weeks to make the costume plus my son’s costume, so I had to take the easier route. I think it actually looks better as one piece since the feathers fill it out beautifully and are so colorful.

I also made some talons/claws to go on my daughters shoe covers. These were carved from foam that was glued together. I then painted it and added the claw. I made a total of 6, 3 for each cover. I then covered these with feathers since I didn’t want it to stand out too much. You could sort of tell it was a piece of painted foam.

The headpiece was my favorite part. It was also my sister and daughters favorite part as well. They thought it looked so cool, especially how I added the cowl to the top area to give the head some lift and a bit of a forehead. I covered this with feathers and added long feathers to the back of the headpiece. I had stuffed the cowl with fabric to make it taller so I needed to cover it with longer feathers. It worked perfectly.

I mustn’t forget the tail feathers. Those were made quickly and were made last minute. My daughter tried on her costume so we could do some last minute fixes, when we noticed that the pig tail was still on the costume!!! Instead of shaking her tail feathers, she was shaking her pig tail!!! It was so funny and cute at the same time. She would have been a pig phoenix if we hadn’t noticed. I quickly made the tail feathers (as explained in step 6) and attached them to where I had removed her pig tail. I made them removable so that she could remove them when she needed to sit at her desk.

My daughter wore her costume to school, a Halloween party and while trick or treating. She looked so cute and colorful as she walked to school flapping her wings. She received many compliments and even was told she should enter it in a costume contest. This is why I decided to enter it here! 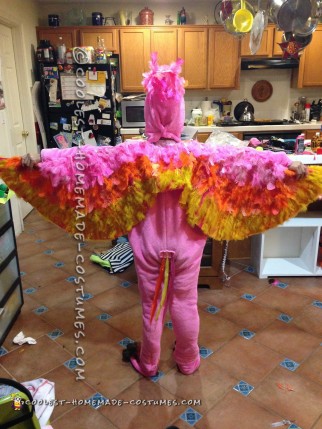 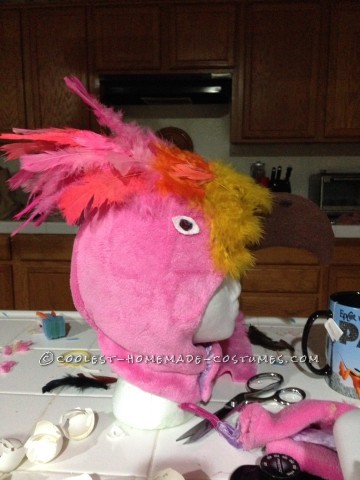 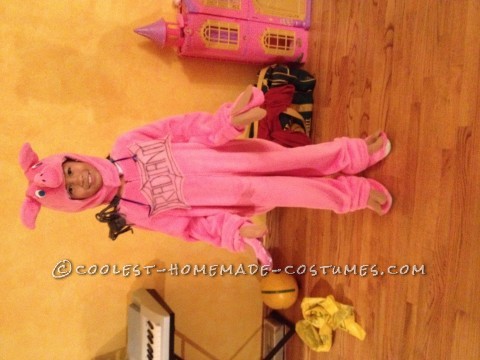 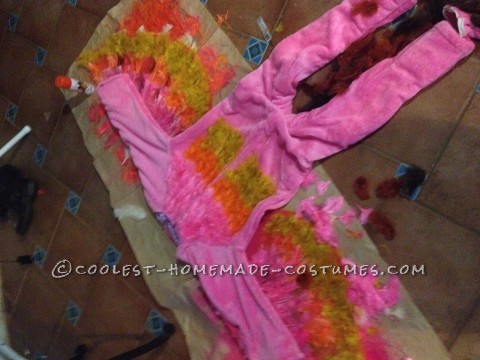 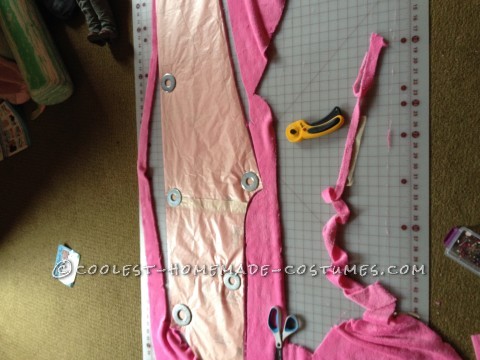 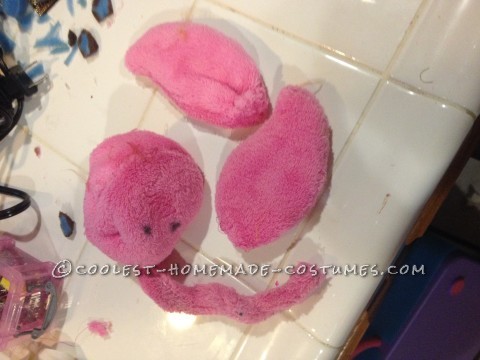 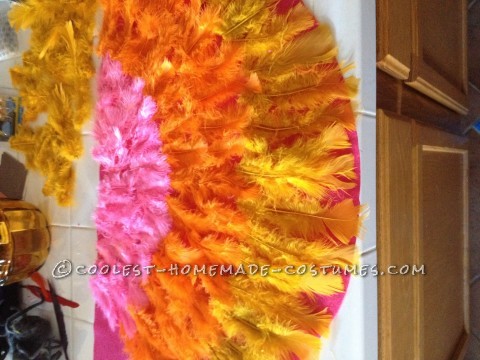