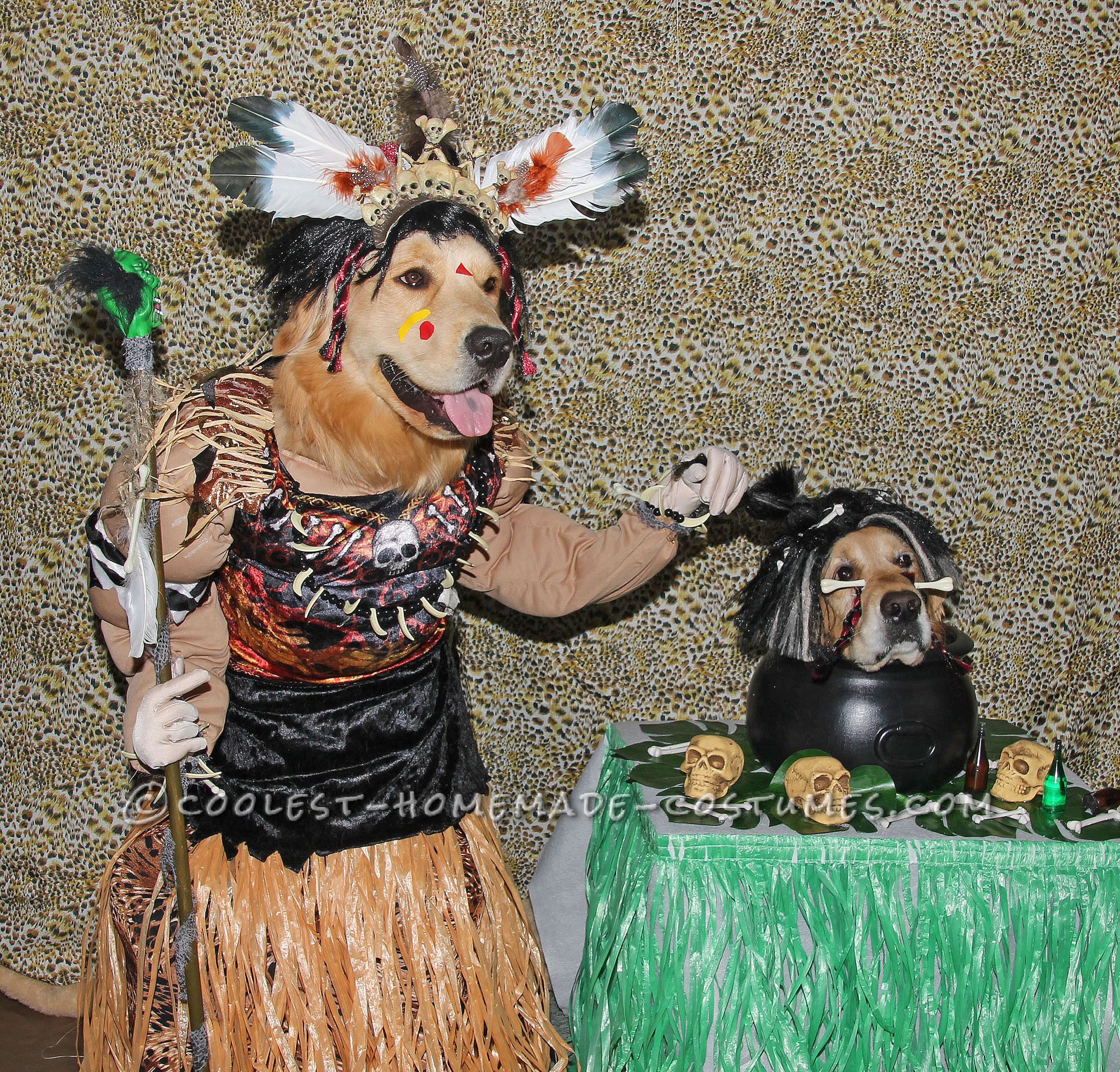 In these illusion costumes, we dressed our golden retrievers Gryphon and Phoenix as a Witch Doctor and Shrunken Head. We made Witch Doctor Gryphon have arms and hands, and appear to be standing next to the shrunken head, pulling it up by the hair. Phoenix, the Shrunken Head, appears to be inside of a cauldron on a table decorated with skulls and bones. We handmade these costumes, which we worked on over several months. 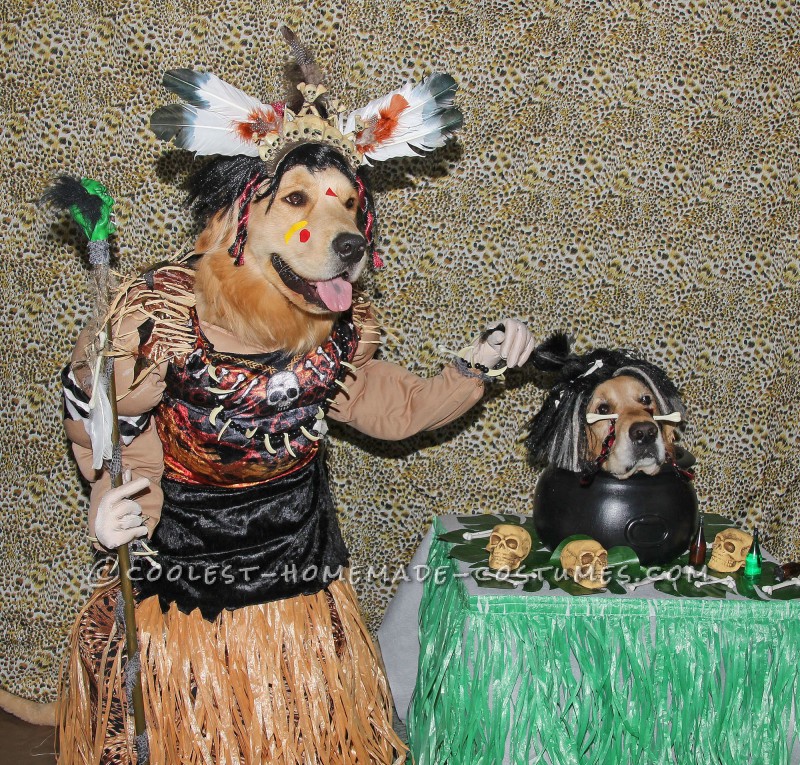 We turned a more basic looking skull headband into a Witch Doctor headpiece by adding a lot of feathers. We used the glue gun to attach faux eagle feathers on either side. On top of those large feathers, we layered smaller feathers in earth tones, of oranges and browns, to complete it. We bought a samurai wig, which was much too long, so we chopped off most of it in a raggedy way, to look like the hair of someone from the jungle, leaving the little red and black braids hanging in front. We then glued the headpiece onto the wig with the glue gun. 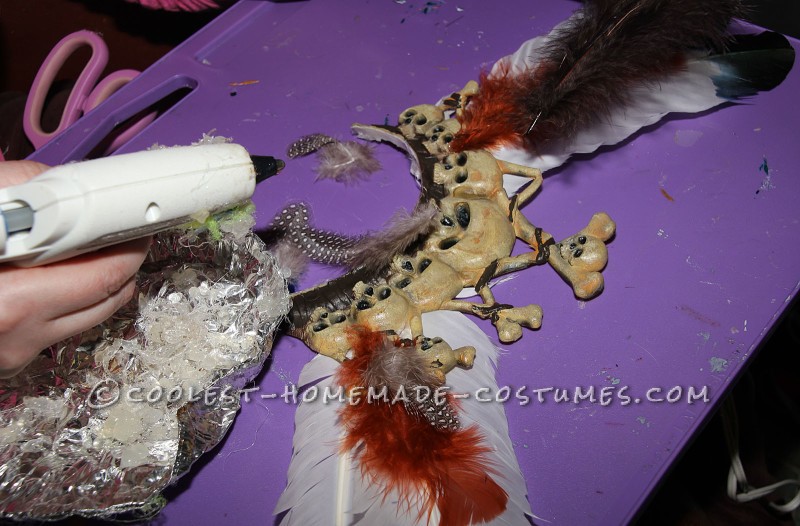 Gluing Together the Headpiece

We started with a muscle chest. We cut fringed strips of zebra print material and sewed them onto the arms of the chest, to make arm bands. We stuffed the shoulders and arms of the chest with stuffing, to make the arms look realistic. We also stuffed the nude colored gloves, being careful to make the fingers look real, by making them wider at the bottom and thinner at the top, and attached them to the ends of the arms. For the skull tunic, we altered the bottom, cutting it into a jagged edge. We glued straw strip by strip onto the neckline and sleeves of the tunic. We also tied on small plastic skulls here and there on the tunic. For the skirt, we cut the grass skirt open, and glued it around the waistband of the animal print skirt, so that it wrapped around it. 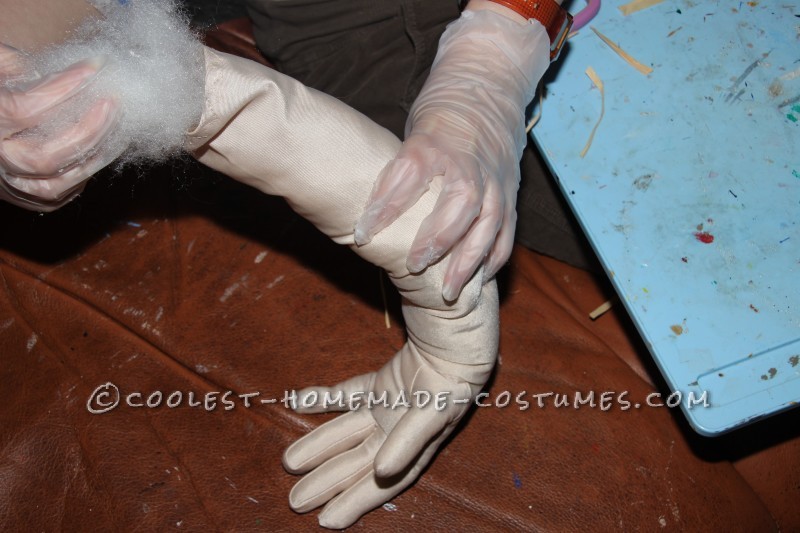 To make the staff the witch doctor is holding, we started by painting a dowel brown. We glue gunned the plastic shrunken head onto the top of the dowel. Then we cut the gray fabric into long thin strips and glued them, so they wrapped around the dowel. We also tied on some feathers so they dangled down.

Making and Decorating the Shrunken Head/Table

The table the shrunken head is resting on is actually just foamboard. It is light and easy to wear, and gives the illusion of being a full table. To make it, we first cut a rectangle of foamboard into a nice size for the table, a little bit wider than the dog’s shoulders on each side, but not too wide to be unwieldy to wear. We then cut a circular hole in the middle of the foamboard, just big enough to fit comfortably around the dog’s neck. We started with the hole too small, and kept just enlarging it slightly until it was the right size, but didn’t let light show through. We then cut gray felt into a piece big enough to drape over the foamboard and hang around it, creating the look of the sides of a table, but short enough so he wouldn’t trip. We traced the hole from the foamboard onto the felt, and cut it out of the felt as well. We then glued the felt onto the foamboard, making sure the holes were aligned. We glued the felt onto the edges of the foamboard, so it would have a more defined edge, and hang down properly. We then glued the grass skirt onto the edges of the foamboard, and then trimmed it until it was the same length as the felt on the bottom. For the black pot, we sawed at the hard plastic on the bottom of the cauldron with a scissor until we were able to cut through it, which took a bit of elbow grease, but eventually we accomplished it. We made a hole in the bottom big enough so that the whole pot was able to easily slip over the dog’s head. We then used the glue gun to attach the cauldron around the hole in the felt covered foamboard, using a lot of glue to make sure it would stay in place.

Once the “table” was assembled, we wanted to decorate it so that it looked jungle-like, like a place a witch doctor would create evil potions and experiments. We covered the felt on the top of the table with green leaves, which we glued on. We also glued on skulls, using light foam ones that wouldn’t be heavy to wear, as well as plastic bones. We added colored bottles of soap bubbles, to look like the potions and ingredients a witch doctor might use. 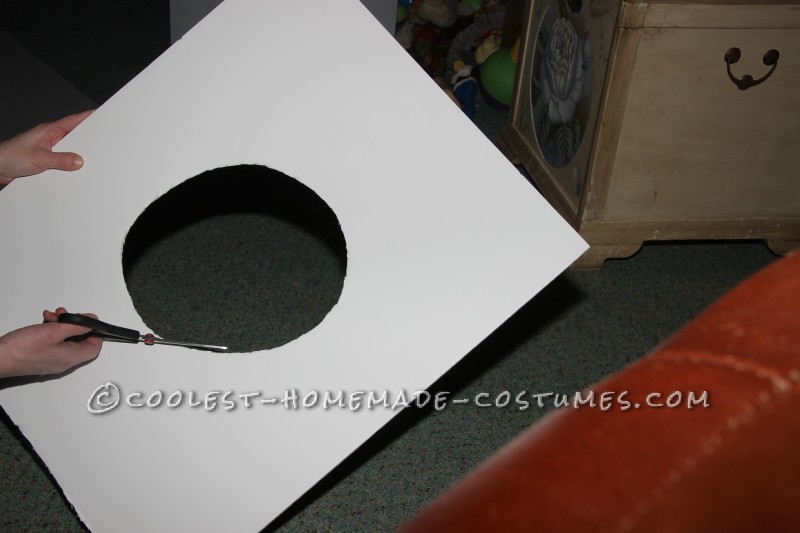 Cutting a Head Hole in Foamboard 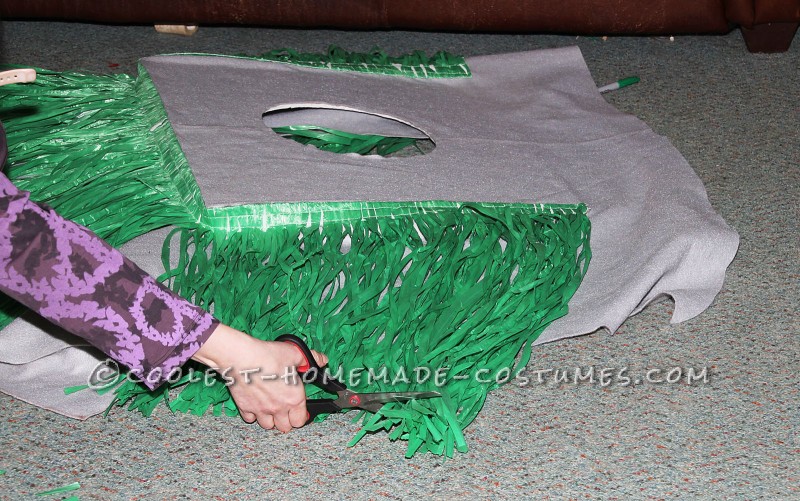 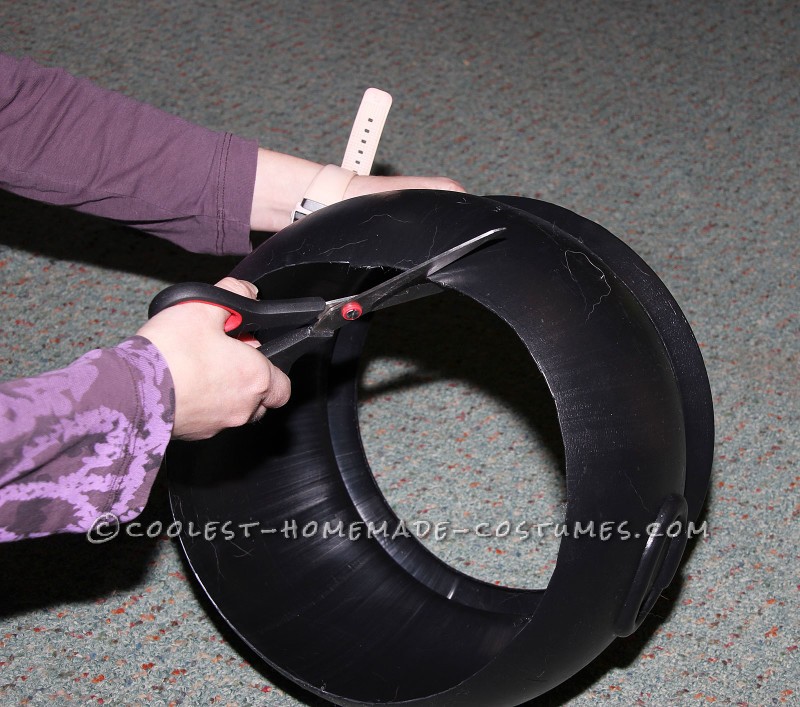 Cutting Bottom out of Cauldron 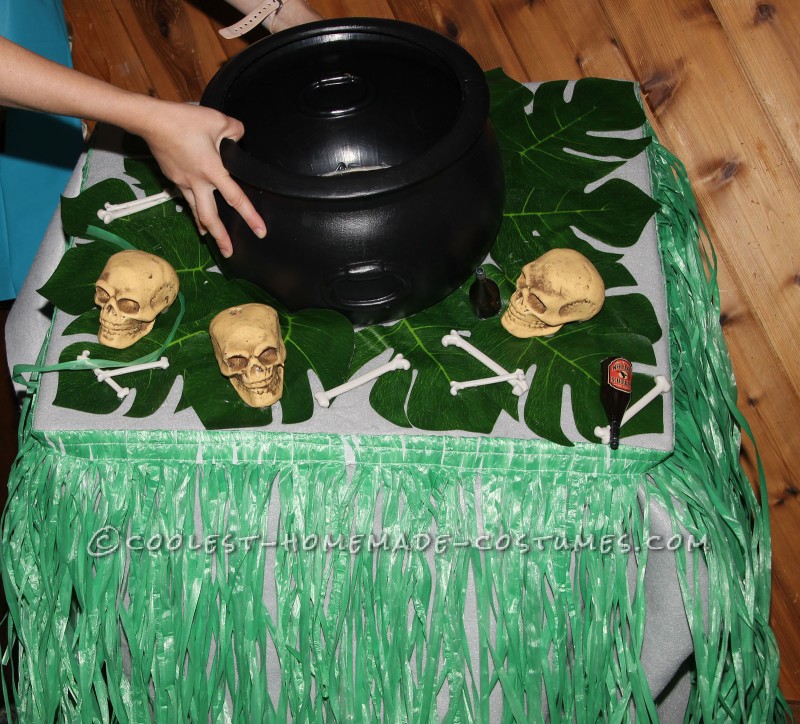 We added a few items to complete the costumes. For the witch doctor, we added some bone necklaces and bracelets. We also added make-up, which was actually shapes cut out of colored tape and lightly placed onto the dog’s face. The pieces were easily removable, and we made extras, to replace them when they fell off. For the shrunken head, we added a voodoo wig, which we cut to make it much shorter. We also tied on some plastic bones, which we weaved into the hair. We added a nose bone, which has wire in between the two sides, to make it look like it is going through the nose. We tied some braids left over from the samurai wig onto the nose bones, to hang down like a real shrunken head often has. 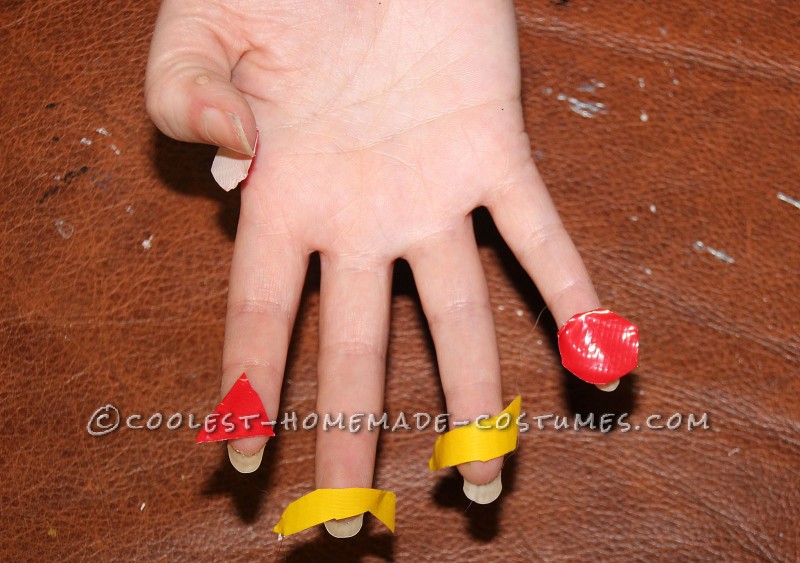 Witch Doctor “Makeup” made from Tape

These costumes were a lot of work, but we had a ton of fun making them. It required a lot of thought, figuring out how to put everything together. When we finally got it together and put it on them, we couldn’t believe the results! We actually thought the witch doctor was going to walk over to us on two legs. When he shifted his body a little bit, it made the arms move, and it really looked like he was purposely moving them, like they were really his arms. We were hysterical! We were so happy with the way they came out. When Phoenix, the shrunken head, would move, we kept getting startled by it, because even though we had made it, it seemed so real. We thought he really didn’t have a body for a minute. We hope you enjoy the short video we attached, so you can get an idea what they looked like in action. 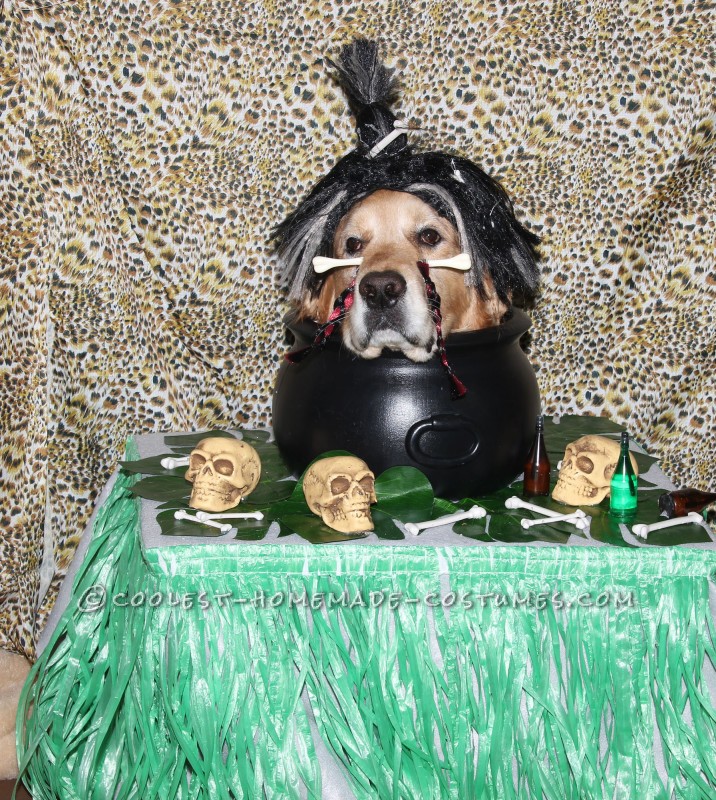 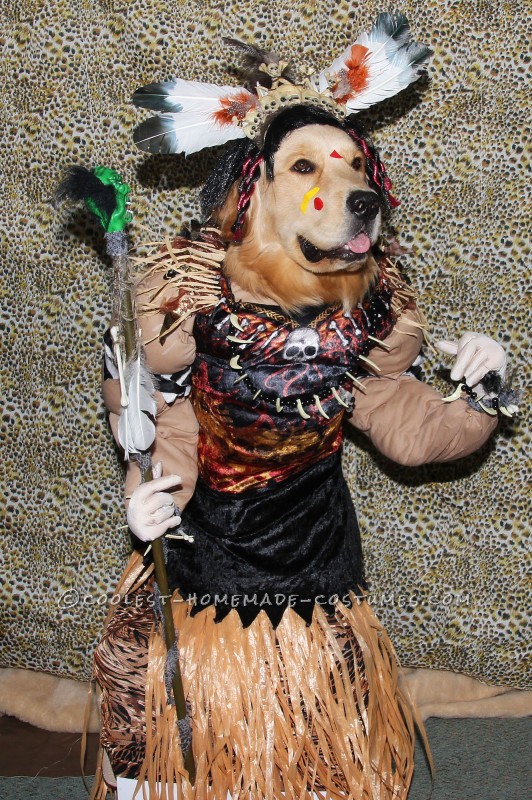