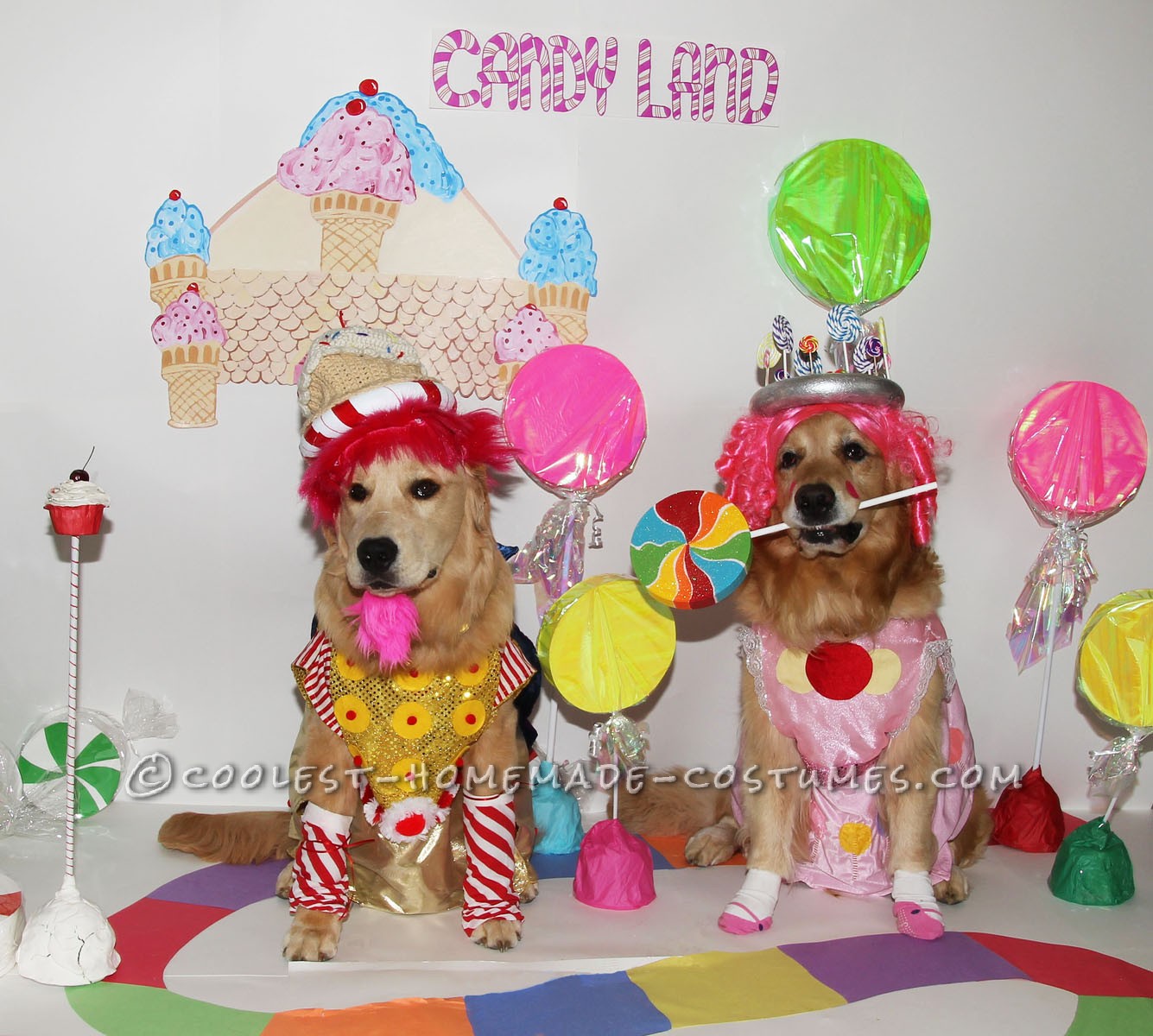 The game of Candyland has come to life. Gryphon is King Kandy, standing in front of his special Candy Castle. Phoenix is Princess Lolly, living happily in the Lollipop Woods.  The pair are standing on the Candyland game board, all ready for the game to begin!

We decided to choose Candyland costumes because we’ve always loved that game, and thought the characters were so colorful and fun. Candy is fun and sweet, so we thought candy costumes would be perfect for our sweet dogs. Everyone loved the idea and thought the costumes were adorable. They said it reminded them of playing the game as children.

Gryphon’s King Kandy costume was made by hand. The outfit was sewed together using the gold sequined fabric for the top of the tunic with gold lamé to make a skirt-like piece for the bottom of the tunic. The red and white striped fabric was used to add colorful sleeves. The cape in the back is purple satin lined with blue satin, with a collar that stands up behind his neck. We tried to copy the look of King Kandy from the game, who looked he had linzer torte cookies on his chest. To recreate the cookies, we traced circles (using the bottom of a standard size plastic cup) onto yellowish felt. We then cut out the circles and glued them in rows on the front of the tunic. On each circle, we glued on a small red pom pom. We next made a belt. We used the jumbo red and white chenille stems to form a candy cane by laying a red and white stem side by side and making twists in it about every two inches. We used another piece of a white chenille stem to form a circle large enough to fit around a big red pom pom. We then glued the ends of the stem together and glued the red pom pom in the center. We made two of these. We then glued the belt around the waist of the tunic with one of the circles and pom poms in the center, and the other one in the center of the collar area, like a brooch. 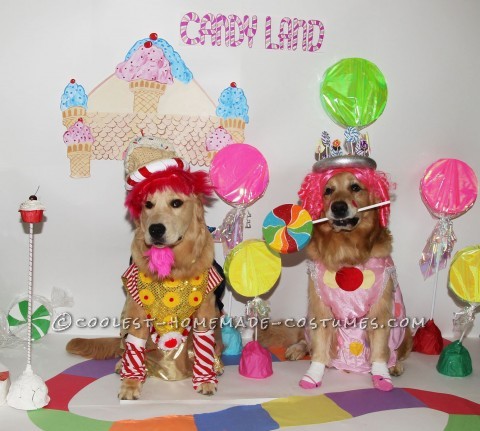 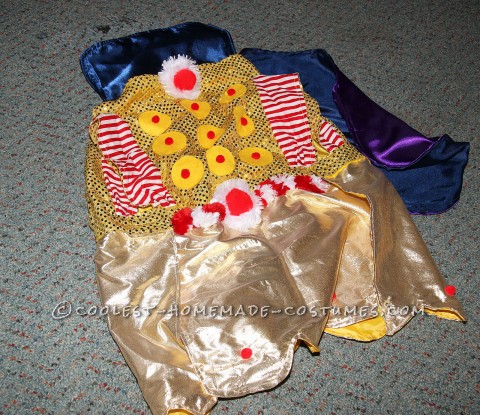 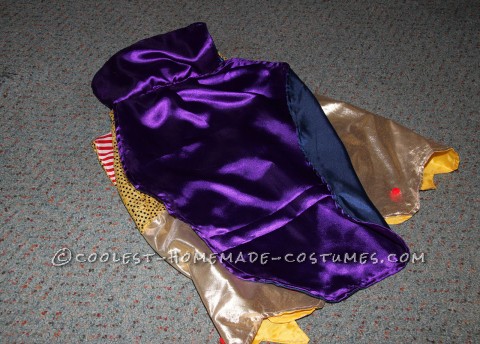 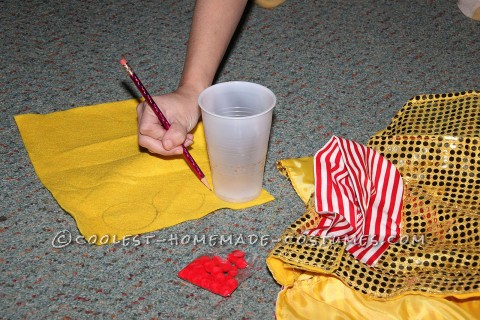 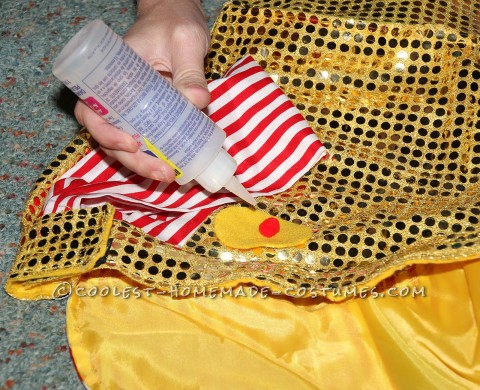 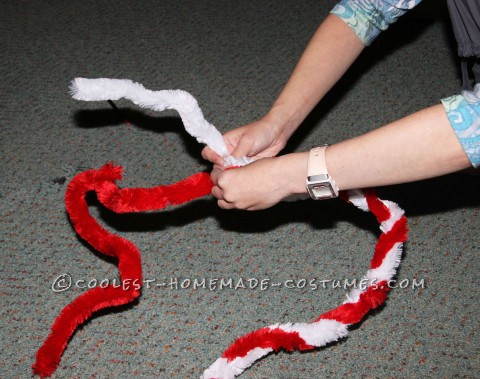 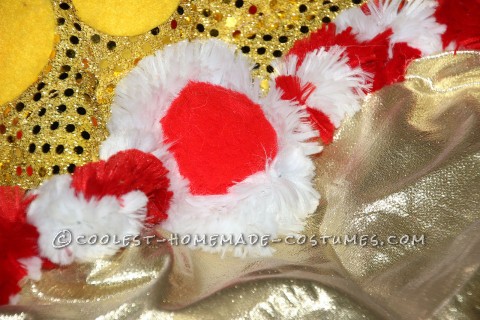 For the headpiece, we purchased a knitted cupcake hat. They sell these online in stores like Etsy and you can customize the colors of the cupcake, liner, and sprinkles. We chose a tan liner with a cream cupcake that we thought was the most accurate to the character. We painted the Styrofoam ring white and used red duct tape to create the candy cane pattern. To make it easier, we first drew a line around the ring in pencil, to show where the duct tape would go. This way we could erase it until we got it as even as possible. We then used strips of red duct tape cut in half vertically all the way around. We then drew a thinner line with a red paint pen to be the thinner stripe of the mint. To attach the cupcake hat to the Styrofoam, we used wire, which we poked through the foam ring up into the base of the cupcake and went back into the Styrofoam. We then wrapped it around itself on the bottom, so it wouldn’t show. We did this in four spots, trying to spread out the cupcake hat so it would hold it ‘s shape. We covered each wire twist at the bottom with a piece of the red duct tape, so it wouldn’t be scratchy. We also attached an elastic band through the Styrofoam to keep the hat on. We attached elastic to the pink wig as well, so Gryphon could wear both together. 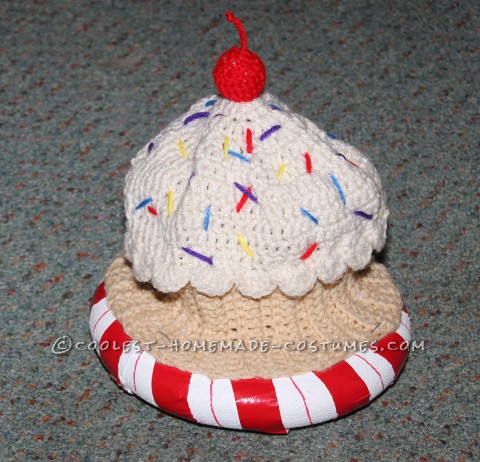 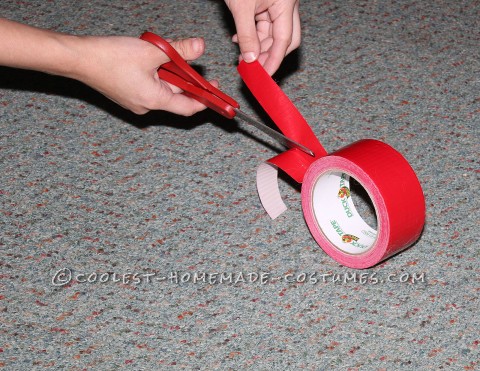 To make the beard, we used a piece of pink fun fur. We cut it into a beard shape, tracing it, and making it twice. We then cut a piece of elastic to fit lightly over his snout. We sandwiched the two pieces of beard together with the fur on the outside on either side, placing the elastic loop in the middle. That way when we put the elastic loop over Gryphon’s snout, the beard hung down in the chin area. It ‘s important to use very thin, light elastic, and make the loop very loose so it will be comfortable. For the stockings, we purchased the striped stockings and then trimmed off the foot part, so his paws would go through them. We glued thin red ribbon onto the top and bottom of each stocking, so we could tie them in a bow and hold the stockings in place on his leg. For his scepter, we purchased a small faux cupcake. They again sell these online at places like Etsy, and are also customizable, so we got it in matching colors.

We used a long, thin dowel for the stick, which we used a red permanent marker to draw candy cane lines on. The base of the cupcake was made of Styrofoam, so it was easy to stick the dowel into it and glue it in place. We then used a small container (we used the container they put soup in when you take home Chinese food) to hold the dowel. We turned it upside down and made a small hole in the top (which was the bottom of the container originally). We filled the container with small rocks, to give it weight, and put on the cover. We then stuck the dowel in the hole we had made, shifting the rocks as needed to get the stick all the way to the bottom, with the rocks holding it in place. We then used model magic to cover the whole container and make it look like a marshmallow. 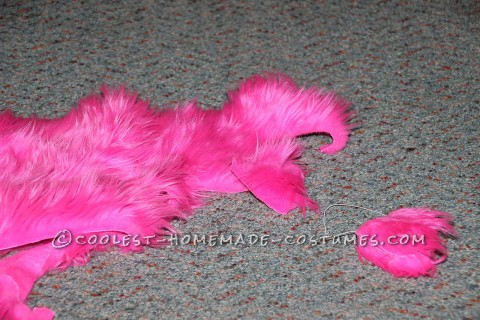 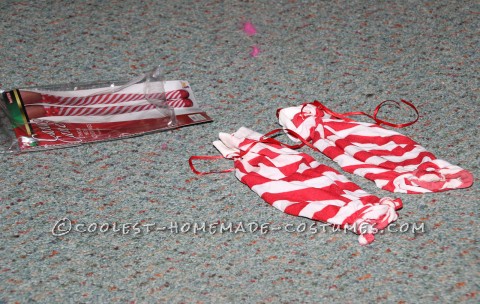 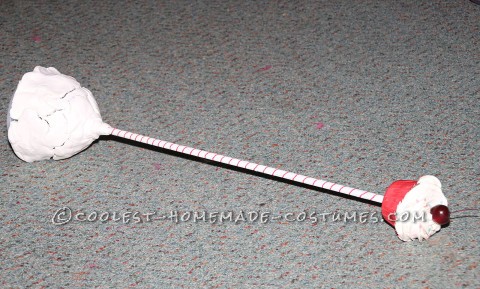 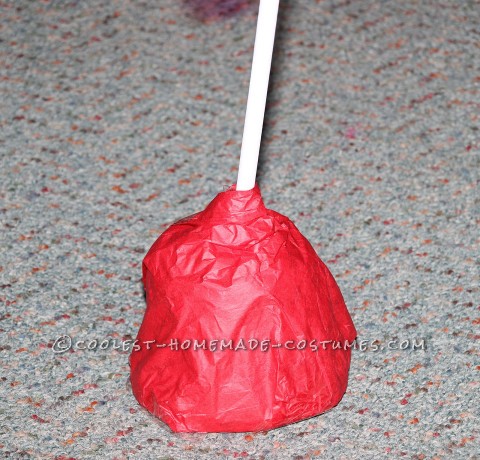 Phoenix’s Princess Lolly costume was also made by hand. The dress was sewn from pink satin with silver trim around the arms and neck. The lollipops were appliqued by hand using the various colored fabrics. They were cut into circles and sewn onto the dress. Then, white fabric was cut into thin strips and red lines were drawn on them, to make up the sticks of the lollipops. The belt was made from the pink sequined fabric and sewn onto the dress waistline. We used larger circles for the lollipops on the top of the dress. 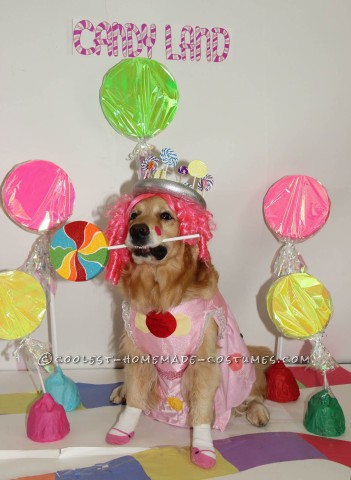 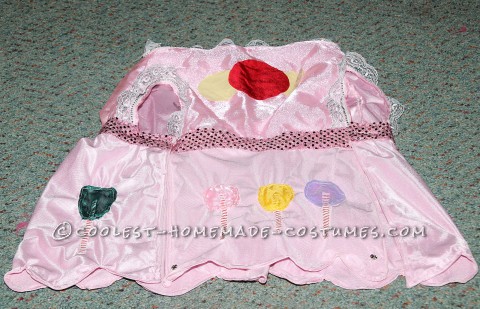 For the headpiece, we painted a Styrofoam ring silver, giving it several coats to make the silver look shiny. We purchased clay lollipops in two sizes and arranged them in a circle around the ring. We used a ruler to try to evenly space pencil dots around the ring, where the lollipops would go. We then pushed each lollipop into the Styrofoam and hot glued it in place. We then strung elastic onto the Styrofoam ring in the same way as the king costume, poking it through the Styrofoam on either end. We also put an elastic string through the pink ringlet wig, so they could be worn together. 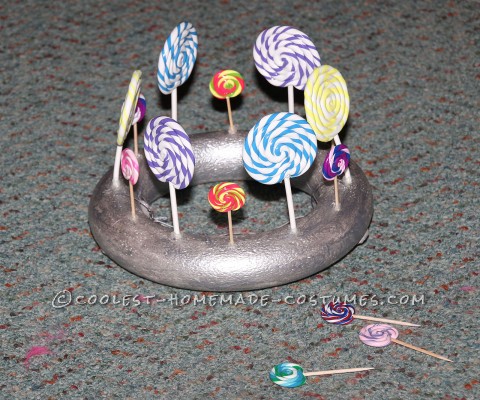 To complete the costume, we added pink shoe socks we had purchased. Shoe socks work well for dogs, since they fit nicely over their paws, and they sell them pretty cheaply in different styles on eBay. We cut circles out of the sticky back felt for the cheeks, which then can be stuck lightly on the dog’s fur. We would recommend making several sets if the costume is going to be worn more than once, because they aren’t easy to reuse since they get covered with fur. We purchased the foam lollipop from Etsy as well, for the finishing touch. 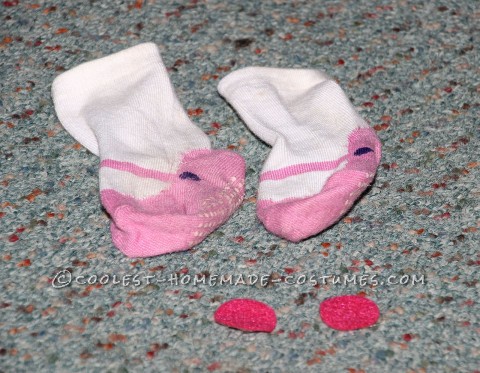 Making the Background and Props

The Castle and Sign:
For the background, we decided to recreate King Kandy’s castle. We tried to copy what it looked like onto poster board with a pencil, then painted it as closely as possible. We recreated the Candyland sign in the same way.

For the path on the floor, we tried to recreate the colorful rectangles on the real gameboard. We laid out construction paper in a rough approximation of how it should go, including some curves. Then we cut the first piece into the shape. We then started the next piece of construction paper where the previous one left off, gluing them together, and trimming off the excess, so that it started to look like a path. We continued the path this way, adding in curves when needed, and trying to follow the color pattern from the real gameboard. 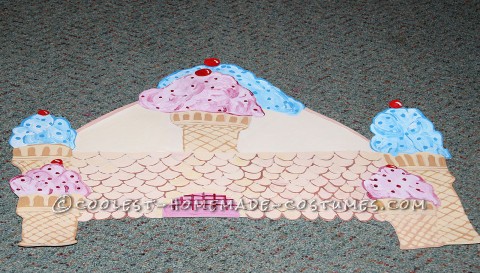 Finally, we made the lollipops for Princess Lolly’s lollipop woods. We cut circles out of colored poster board in three sizes, tracing the size of various paper plates, to get nice circles. For each lollipop, we made two circles, as well as an inch and a half strip long enough to go around the edge of the circle. We then laid one circle flat and squeezed a line of glue around the entire edge. We stood the poster board strip on its edge and stuck it in the glue so that it went around the circle. We then put glue around the top edge of the strip and laid the other matching circle on top, to make a 3D disc. We made a small hole in the bottom of the disc, just big enough to fit the dowel, and glued it in place. The discs were then covered with the cellophane, with a ribbon tied around it, leaving a little extra cellophane hanging at the bottom. The ribbon ends were curled with scissors. We then made the base of the dowel by cutting a hole in the container, the same way we did for the base of the King’s scepter. We filled the container with small rocks and glued the dowel in place. We then covered the container with colorful tissue paper and taped it along the bottom and sides, trying to form a gumdrop shape. We made two small lollipops, two mediums, and one large, to form the triangle of lollipop trees they have on the game board. 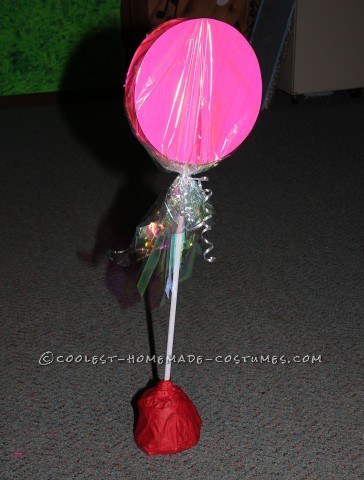