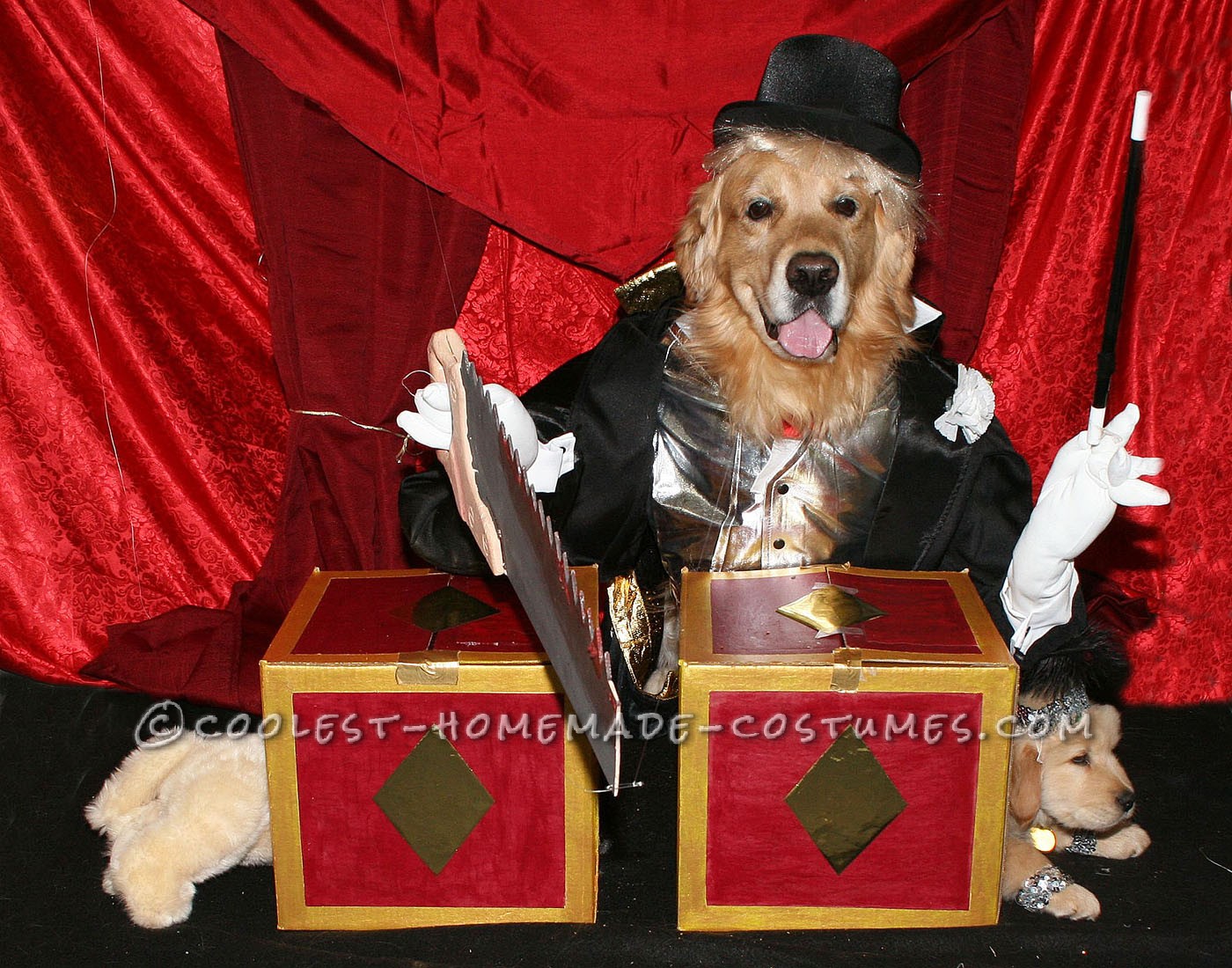 It’s time for the Halloween Golden Magic Show! Master Magician Phoenix the Phenomenal is showing off his latest trick. He sawed his little assistant, 8 week old Gryphon, right down the middle. Abracadabra, Gryphon is in two! But don’t worry, Phoenix will soon put Gryphon back together again!

We wanted to pick something different and unique for our dogs’ costumes. We thought it would be cool to make a fun illusion. We have an adult golden retriever and we were getting a golden puppy, so we knew we could do something to take advantage of his tiny size before he got to be a big dog. We wanted to pick something that would show the size difference between the dogs. We decided on a magician sawing his assistant  in half, because we knew we could fit the puppy into a carton and use a stuffed toy dog of a similar size to look like his back end. We picked everything out and made it all before we even got the puppy, so it was all ready to go, because puppies grow fast!

We got it all together and it was a big success. Our friends and family loved it and fell over laughing. The puppy, Gryphon, was so tiny, he kept falling asleep. He didn’t mind the costume at all and seemed to think the box he was inside was a little bed. It was a lot of fun and we even used the picture as part of a calendar for gifts for our friends. 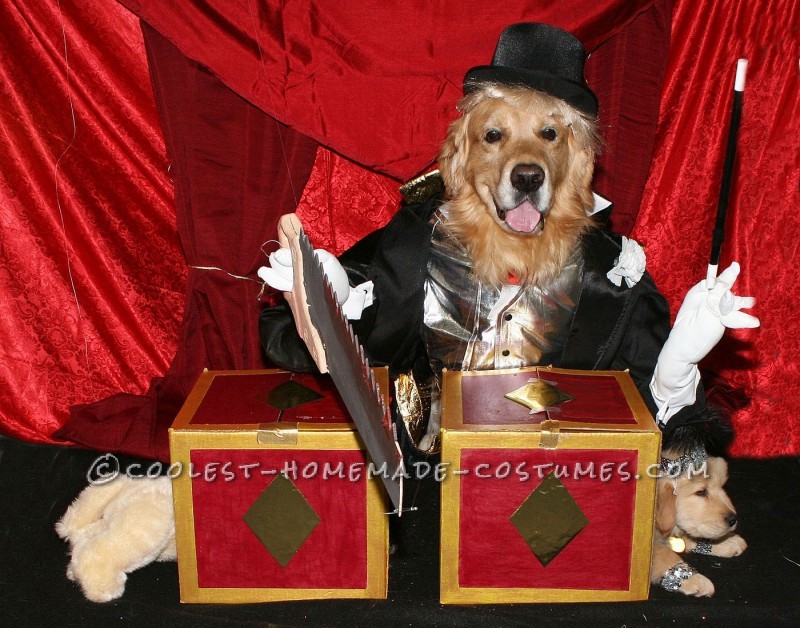 Magician Phoenix sawing his assistant in half

Putting Together the Magician Outfit

To make the magician outfit for Phoenix, we purchased a magician outfit intended for a human child. It came with a silver vest and black jacket with a collar. We cut the neck hole a little larger to make it easy to fit over Phoenix’s head, and we tied up the bottom of the outfit so that he wouldn’t trip on it. We stuffed the sleeves of the outfit going all the way into the shoulders with stuffing, to look like a human’s arms. To make the hands, we stuffed the gloves, pushing the stuffing deep into each finger to make it look as realistic as possible. It’s important not to over-stuff it, and to make sure the fingers are wider at the bottom than at the top to look like real fingers. We then attached the ends of the gloves into the sleeves of the magician outfit, making sure the black sleeves were on the outside of the gloves for a realistic look. We used the fishing line to tie the handle of the saw onto one glove, making sure to tie on the fingers separately and position them correctly. We tied the end of the magic wand onto the other glove in the same way. We glued the carnation onto the lapel of the jacket, to add an extra touch. For the top hat and wig, we used elastic to add a string to keep it on Phoenix’s head. We also glued red ribbon for a band around the hat, to match his outfit. 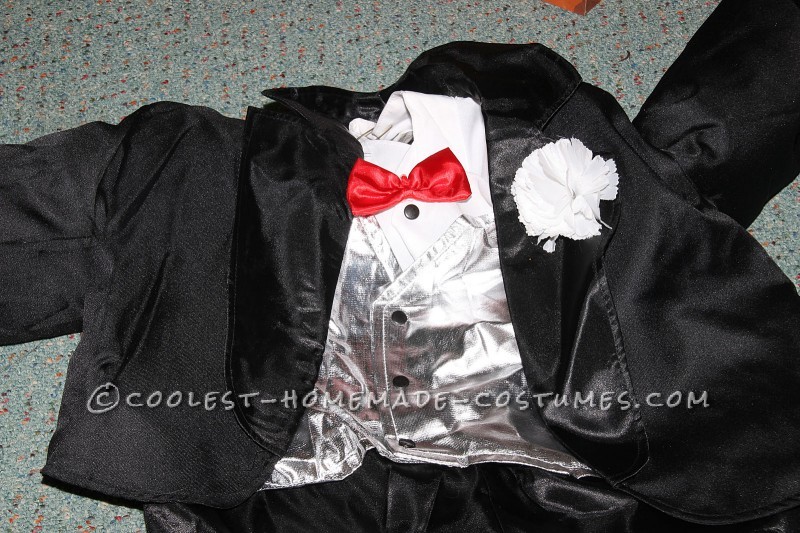 The magician suit with carnation 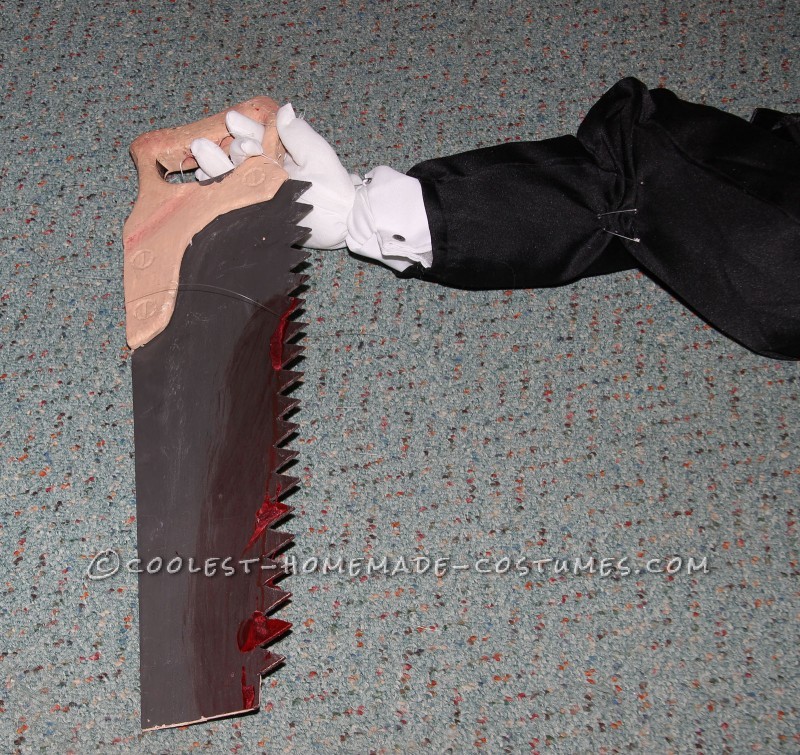 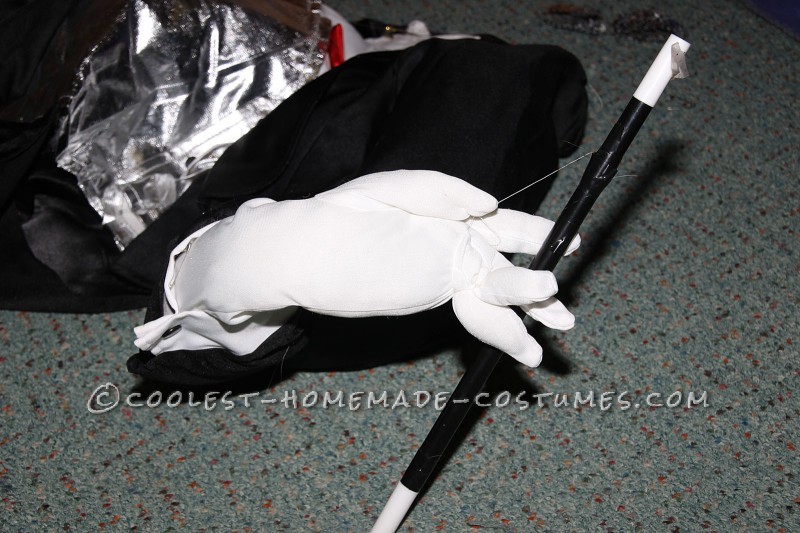 The magician’s assistant outfit for Gryphon was a little simpler. We used silver stretch sequin trim to make bands for each of his paws, which we made big enough to stay on comfortably, but not big enough to fall off. We glued the ends together. We made the headband in the same way, a little bigger, and added a black marabou feather to the back of it. We also strung it with elastic to keep it on Gryphon’s head. For the back of the assistant’s body, we needed a toy stuffed dog as similar to Gryphon as possible. We had a few golden retriever stuffed toys around the house. We weren’t sure which would be closest to him, so we lined them all up and chose at the last minute. We think the one we chose seemed pretty close. 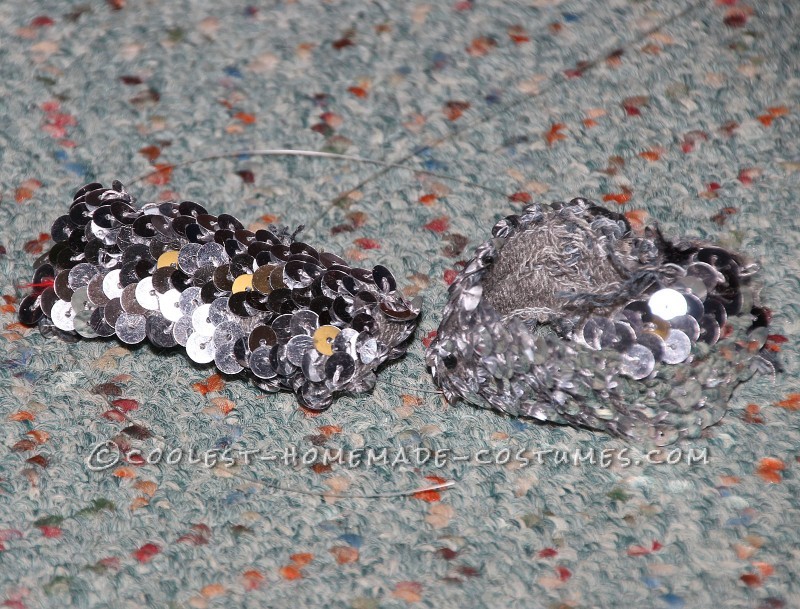 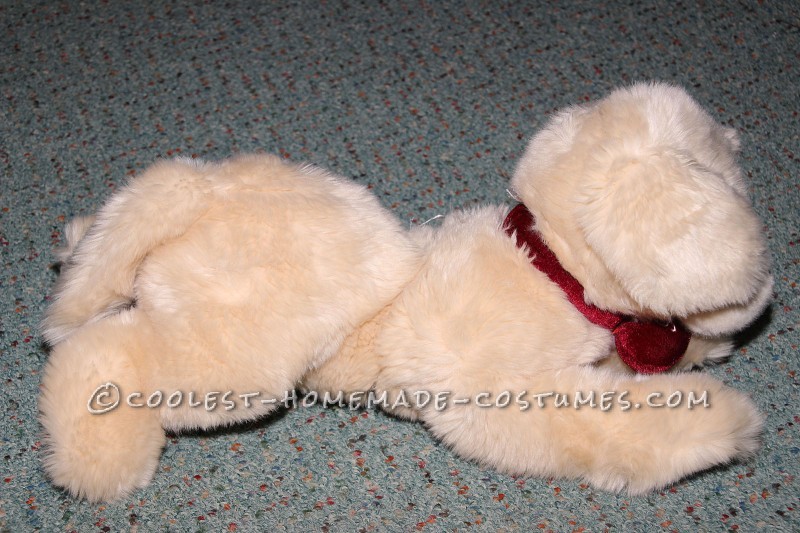 Golden retriever toy to look like puppys other half

To make the magic boxes, we needed two cartons of identical size. This costume is best  done with a small dog or a puppy, but you might be able to do it with a larger dog if you got very big boxes. The cartons we used were each 12x12x10.5 . These seemed to be just about right for the puppy who was about 10 pounds at the time. To decorate the boxes, we left them unfolded and flat, so they would be easier to paint. We first used a ruler and measured a border about an inch and a half thick around the face of each side of the boxes, drawing lines with a pencil. We then covered the borders with masking tape, to keep the edges nice and clean.

We painted the rest of the boxes red and then carefully pulled off the masking tape. This has to be done very gently, so as not to rip the boxes and create a rough surface. The border was then painted yellow, being careful not to get it into the red. We then painted over the yellow with gold paint, to get it to look shiny. We cut diamond shapes out of gold wrapping paper and glued them in the center of each face of the box. When it was dry, we folded the boxes into the box shape and we glued the bottom flaps closed, so it would be secure. We left the tops open. We then cut a small hole into the side of each box, just big enough to fit the puppy’s head and front paws, and the stuffed animal’s back end, legs, and tail. We put the stuffed animal inside one of the boxes and closed it with gold duct tape, trying to overlap the gold paint so it wouldn’t show much. The other box we left open until we put the puppy inside, and took the gold duct tape on and off as needed, so the puppy could come out fairly often. 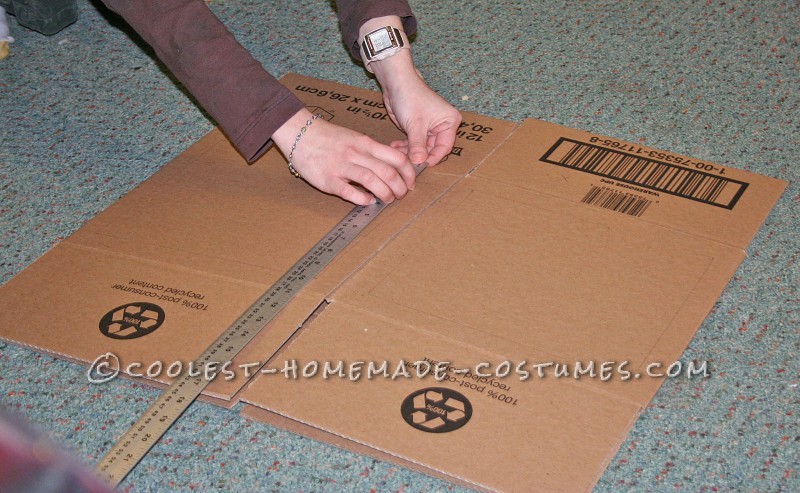 Drawing the border on the magic boxes 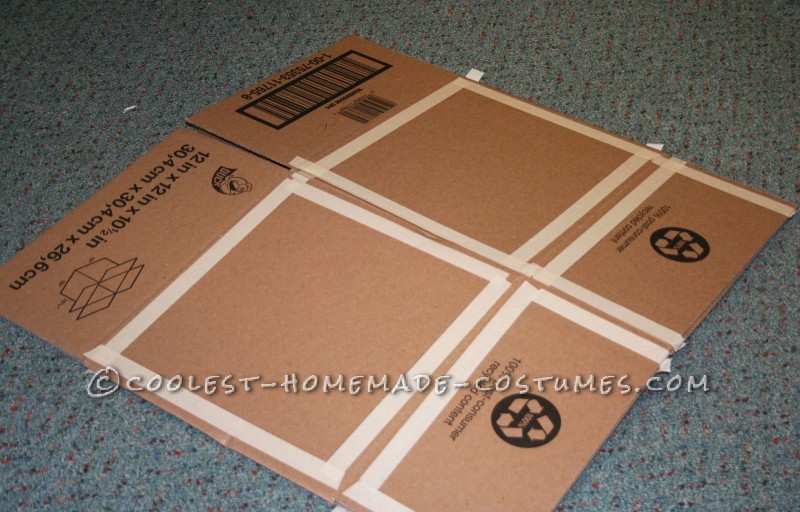 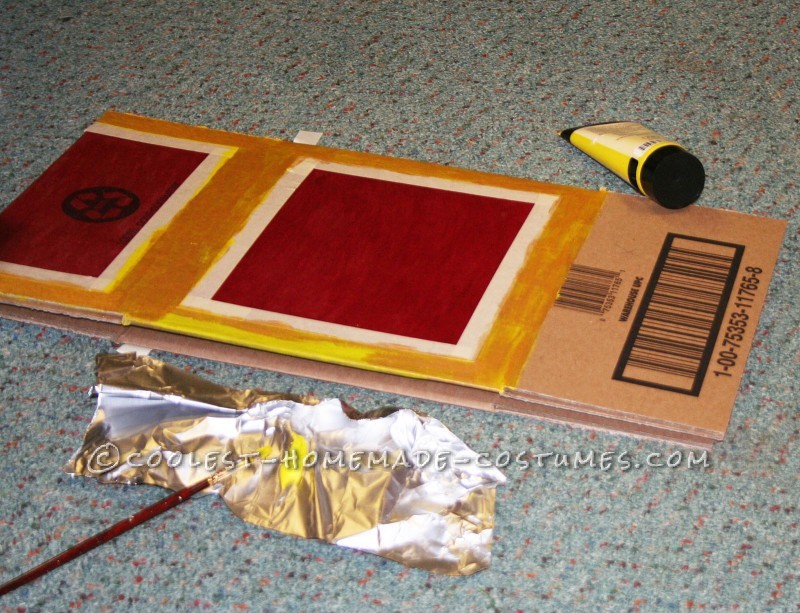 Making the Background and Stage

To make the stage for the backdrop, we attached curtain window panels to a long dowel. We cut off strips of wire about 5” long and twisted them through the material onto the dowel in several places, along the length of the dowel, to hold them in place. We then attached the valance in the same way in the center of the dowel, overlapping the window panels. We then threaded dental floss through two strips of duct tape and wrapped them around each end of the dowel, so it could be hung up anywhere. We used a red fabric tablecloth behind the curtain, to complete the look. 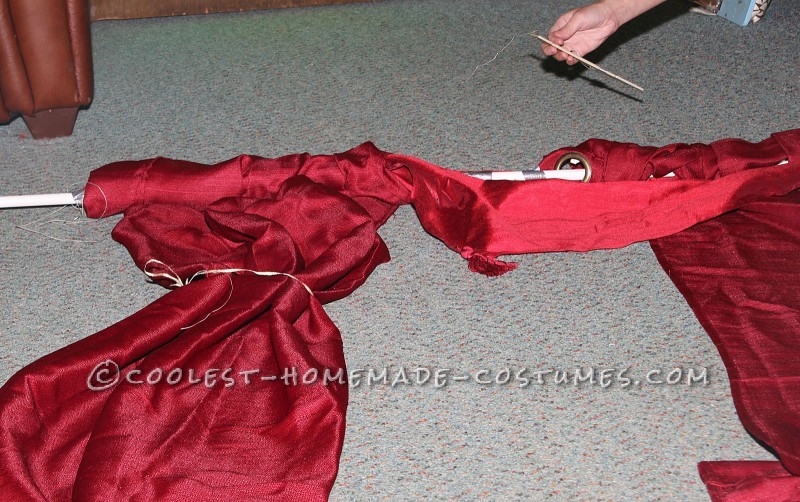