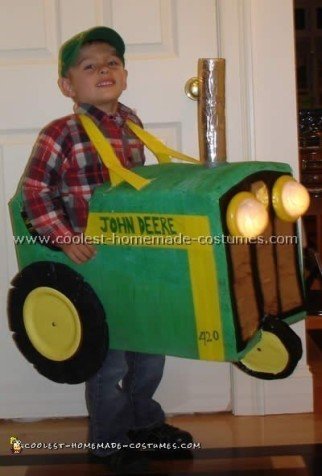 My son is absolutely obsessed with John Deere so naturally he wanted to be a tractor for Halloween. Being brought up in an era of homemade Halloween costumes and birthday parties we opted for our own unique Halloween costume idea. It was a good bonding experience with my son to watch an empty egg box, some electrical tape and Styrofoam transform into his dream.

All of the materials came from my parents’ basement and the only items we purchased were two stick-on lights from the dollar store. For the farmer clothes he wore his jeans, some handed down boots and flannel shirt and his favorite “I love John Deere” hat. The biggest challenge was getting the costume to not be so “front heavy” but the construction time really only took a week with drying time. (I work full time, take two MBA classes at night and take my son to karate twice a week so one week for me probably equated to five actual man hours.)

Overall we were happy with the way the costume turned out. My rule is that if the majority of the people who see the costume can identify what it is then it was a success. For me it was nice to see the smiles on all the neighbors’ faces when they saw the costume and appreciated the work that went into it. For my son he was delighted to “drive” around his beloved John Deere tractor with real working headlights all night long. 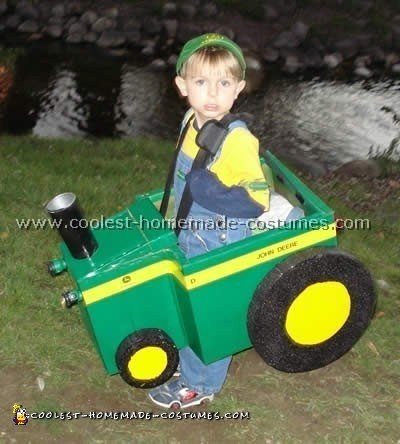 When my son told me he wanted to be a John Deere tractor for Halloween I immediately went to the computer for a unique Halloween costume idea. Your site gave me the best ideas to start with.

My husband took a cardboard box and cut it so it was narrower in the front to create the front of the tractor. He then made a thin and light wooden frame and stapled it to the top of the tractor to give the costume more strength. As we talked about attaching the smokestack my dad had the idea of cutting a hole under the smokestack so that people could put the candy down the smokestack.

We took it one step further and Velcroed a bag underneath to hold the candy. My son could remove the bag and empty it out to make more room if needed then reattached the bag. This was the hit of Halloween night. My son got more candy because people got such a kick out of putting the candy down the smokestack. For the headlights we used two green working flashlights we found at the dollar store. This worked great for illuminating the way on Halloween night. At the rear for taillights we used two blinking red lights that my husband got at a trade show. 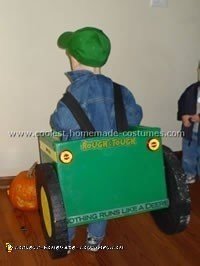 To hold the costume up I bought suspender material and stapled it to the tractor. My husband is an engineer and very detail oriented so he spent a lot of time on the costume (about 10 hours) and it showed. 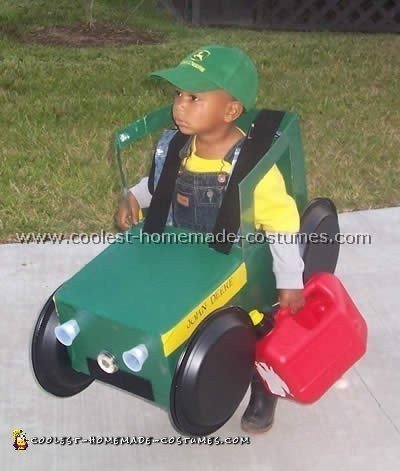 This unique Halloween costume idea was the hit every where my three year old wore it. My husband and I used some old cardboard boxes, cut off the top flaps and cut holes that resembled a window for his arms, used duct tape to sure up all seems. We then spray painted it green. I used black plastic paper plates that were left over from a party for the wheels.

We used medicine dispenser cups provided by my neighbor for headlights. Inside the medicine cups I used some individual wedding lights by Wiltons found at Wall-mart. On the back I used electrical tape from our storage shed to make a caution sign in the middle of the back. I used round red blinking lights found in the auto section at Wal-mart. It was all held up my some Velcro straps over his shoulders.

For a little more fun I bought a new small gas can, cut a hole in the top for his treats; after all candy is the ultimate fuel for a three year old! To top it all off he wore a John Deere hat, John Deere shirt, John Deere socks, a pair of over-alls and his rubber boats; all out of his closet to finish off our theme. Be ready to be a celebrity because people took so many pictures everywhere we went. 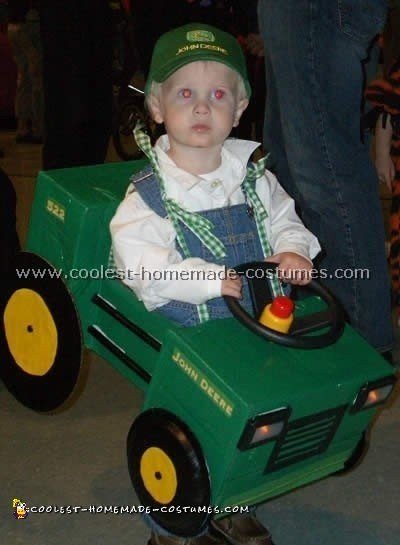 Before I saw everyone else’s costume I thought that I had a unique Halloween costume idea! The only thing I could add is that I had actual working head lights and tail lights on my son’s “Tractor” (and a trailer hitch – although not a three point hitch as his Dad’s has!)

It didn’t take long to do – and we had a lot of fun. I wish it had held up long enough for our next little one to use! 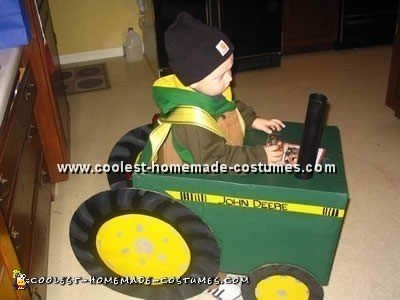 My son loves his tractors and he wanted to be a tractor for Halloween so we granted his wish for a unique Halloween costume idea.

My sister started with a box and then cut out wheels from cardboard and attached them on. Then it was painted. We used a paper towel roll for the smoke stack and reflective tape for his slow moving sign on back which really was nice when trick or treating in the dark. We also jazzed it up with break lights that were like 80 cents a piece. 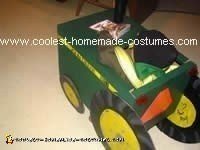 We secured the inside with some small pieces of wood inside around the top to make it stronger. Then, working with my son on height, we stapled on the straps that went over his shoulders to hold it up. After it was finally done and my sister slaved away for approximately 9 hrs. we had a great time trick or treating.

I thank my sister for all her hard work on making my son’s Halloween come alive. Nic and my sister wore there carharts and John Deere gear to add the finishing touches. My little tractor man with his unique Halloween costume idea. 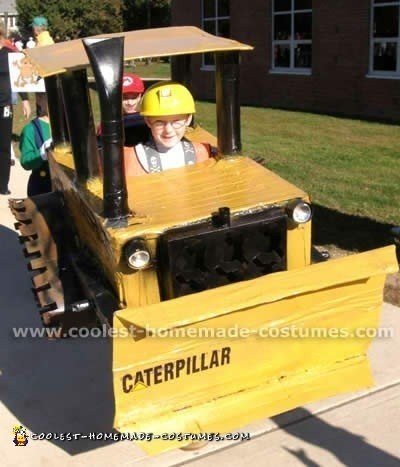 This unique Halloween costume idea is nothing more than recycled cardboard, spray paint, and a pair of suspenders. The headlights were spray paint tops and low voltage lighting bulbs. You will need lots of cardboard, duck tape, and spray paint. 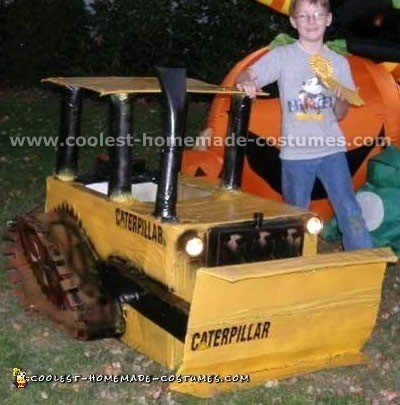 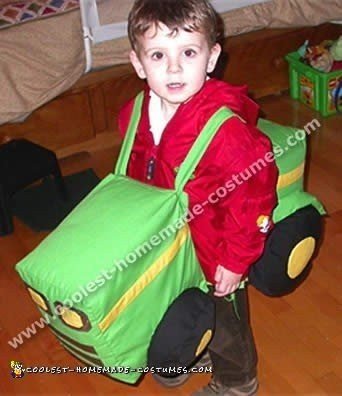 My 2 years old son, Alexis, loves tractors and since I wanted to create his own unique Halloween costume idea. It was my first one ever done!

I searched on the Internet and found a lot of different pictures of tractors and kind of “mixed” them together to give this result.

He was very proud of it… so was I! What a wonderful gift to see your son having a big smile at the first sight of his costume!

Since I wasn’t sure how great it would be, I used regular cotton fabrics but for the “lights”, I used a sparkling silver fabric. The toughest to do were the wheels. I worked on it 2-3 days before Halloween and finished it only a few hours before we went into the streets for candies! :-) 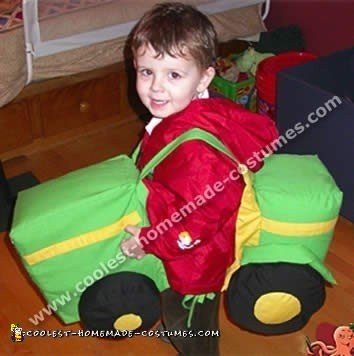 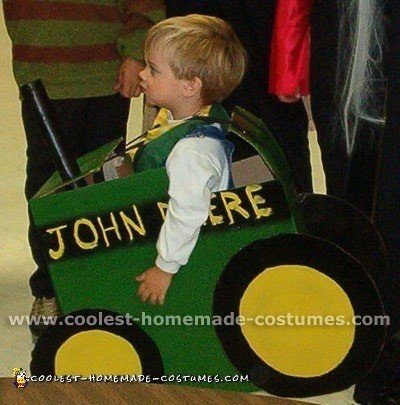 Every year I ask my two children what they would like to be for Halloween. Well, my son Tyson (2 at the time) is really into John Deere tractors and it just so happened that that is what he wanted to be. I was thinking how am I going to do this! I did it and I think it is probably the most unique Halloween costume idea of all my creations so far!

It actually was pretty easy once I got started. I used a cardboard box and cut it into the shape of a tractor. I used a knife to cut it instead of scissors. Using the knife made it easier to shape. I purchased actual John Deere green and yellow colored paint at a local TSC (tractor supply store).

The wheels are glued onto the box. My son couldn’t hold this box up by himself, so I used elastic and attached it from the back of the box to the front across my son’s shoulders to keep the box off the ground and make it possible for him to walk with it. Then I dressed my son in bib overalls and put a John Deere scarf around his neck to make him look like a farmer for an added touch.

He took first place in the most original category at our local kids’ Halloween Party. I love this time of year and I look forward to it so we can come up with other ideas for costumes to make. I have lots of winning ideas and costumes! I make them all every year not just for my kids, but also for my nieces and nephews. I hope you enjoyed my unique Halloween costume idea.