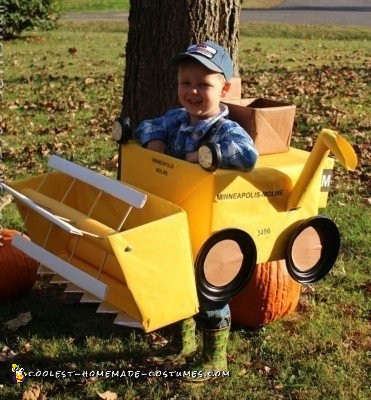 Parker, his Grandma, and his PeePaw enjoy spending their summers at antique tractor shows, where they get to display and enjoy the family tractors. When I asked Parker what he wanted to be for Halloween, his reply was simple…. a Combine Driver. Parker tends to analyze everything, so our costume had to be as close as possible to the real combine. We spent a lot of time making sure that his combine was complete, including a spinning head and the correct number of augers. We even had to look at the original 1967 literature for accuracy.

Parker’s costume was made from:

First, we wrapped the boxes with the paper. Then we used bolts to secure the boxes together. The wheels were old frisbees spray painted black and were also attached with bolts. Next, the head of the combine was made out of a pool noodle with a dowel rod going through so that the head can spin, which is a very important feature for a 4-year-old!

The paddles of the head were made of cardboard and wrapped with paper. They were attached to the pool noodle with small dowel rods and hot glue. Finally, the costume was worn by cutting old straps and attaching them with bolts.

Battery operated push lights (the headlights) added the perfect touch for Halloween safety. His grain hopper (the ice cream container) serves as a trick or treat bucket. With the help of a blue tooth speaker, his combine even played engine noises.

The cost of our costume was very minimal overall. We had most of the supplies already, so a quick trip to the hardware store for more bolts was all that was needed. Parker has room to grow, so we hope to get a few years out of it unless he decides to be another tractor driver next year!! 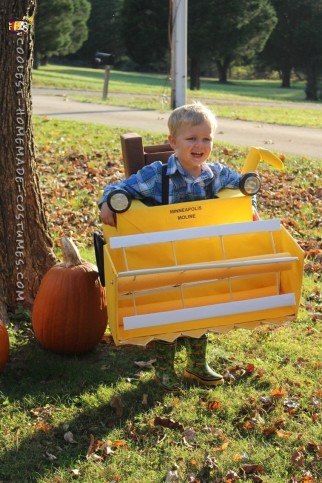 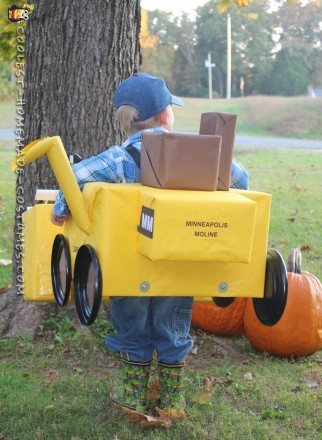 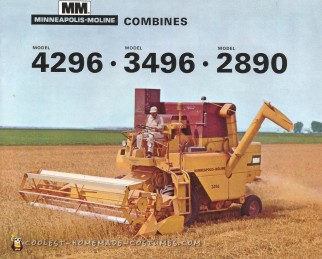