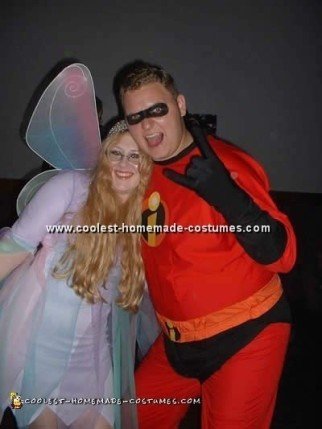 I wore the Incredibles costume that I made to a costume contest in 2004 before the movie came out. NO-ONE knew who I was supposed to be. I tried to explain it to the judges and they had no reference since none of them had seen the commercials for the movie so I lost the most accurate costume category.

I made it out of fabric which I purchased from Wal-Mart and a one-piece pajama pattern. I attached a pair of black driving gloves to the sleeves. I used iron together webbing to make the insignias.

The funny part is that the movie came out like November 6th and since then every one of the judges I have ran into has apologized and said that I should have won. Oh well I was just ahead of the curve with incredible costume that I made. 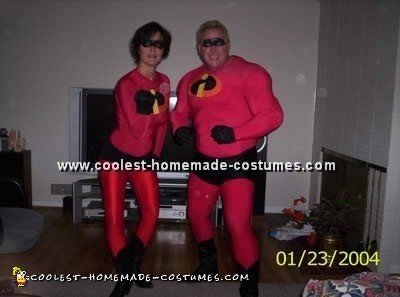 The Incredibles costume was my husband’s idea and creation. He is creative isn’t he?

We used our own running/workout red tights. From there my husband drew the logo to which we stenciled on to the appropriately colored material. We attached the “logo” with iron on material. We had a little help from a friend who let us borrow a muscle suit to fit under the man’s top and we both wore our cowboy boots.

Last was the makeup. I look pretty close to Mrs. Incredible so not much more was needed. My husband needed a little blonder hair to which we just applied temporary blonde spray which can be bought at any beauty supply store this time of year. What a blast we had. We attended several costume parties to which others were dressed in the Incredibles costume (store bought) but ours won hands down!