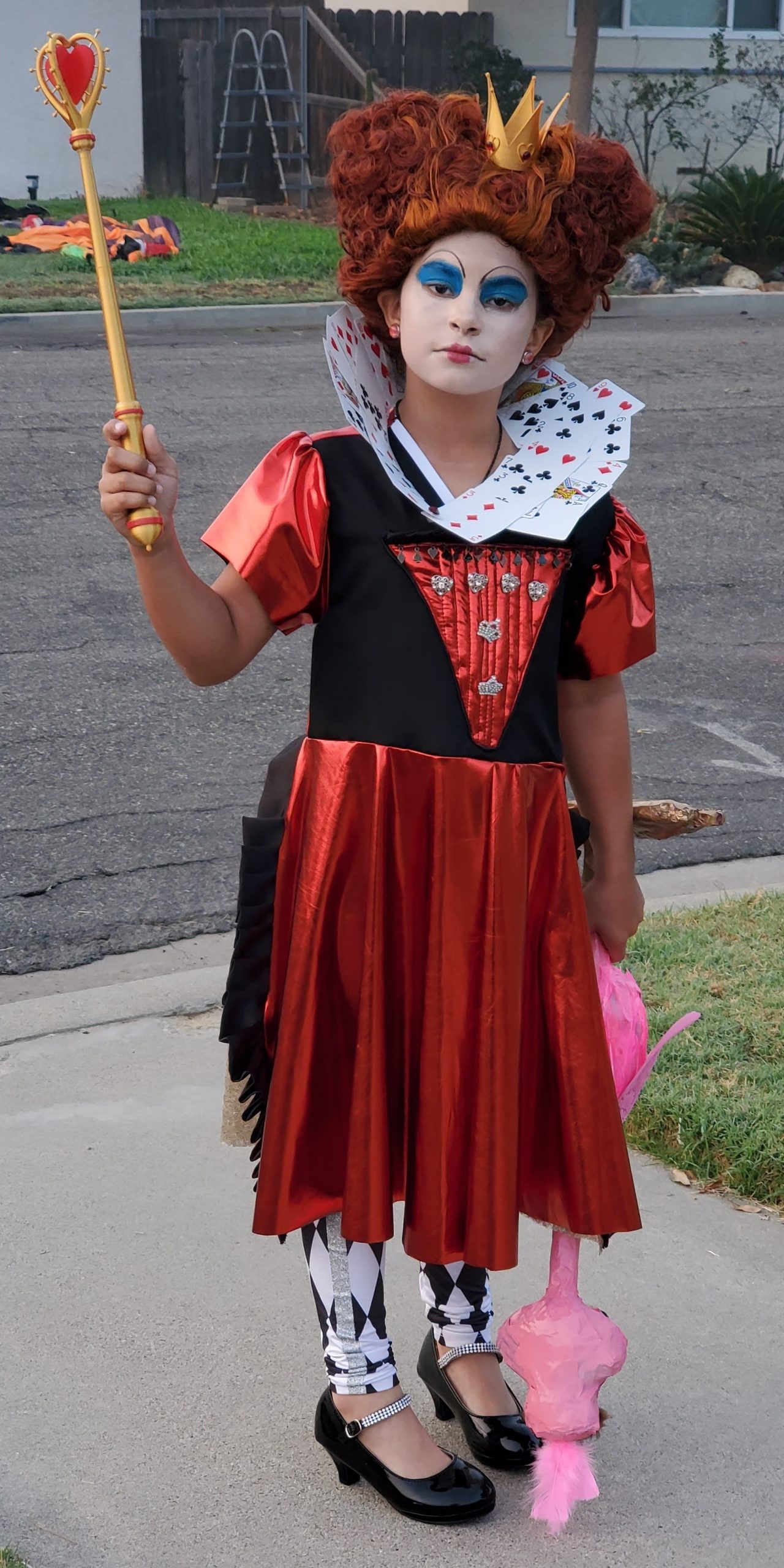 This year my kiddo wanted a Queen of Hearts costume. We went to Hobby Lobby to pick out material. My daughter was excited to start the project so she told the young girl at the cut counter all of her plans for the costume. The girl asked if she planned on being a nice queen. My daughter almost looked insulted and spat, “of course not”. The girl got a good chuckle out of it and told her she needed to come back after Halloween and show her how the costume came out.

The first full dress up day was at school. My daughter looked in the mirror with pure giddiness. However, as soon as she stepped out the front door she was in full character. She screamed, “off with their heads!” A few neighbors turned to see what was going on. It didn’t stop there. At school she couldn’t get out of the car fast enough to scream off with their heads at the other students. I thought for sure I would get a call from the school saying I needed to pick the little tyrant up before she hurt someone. Her main goal with the school was to make it into the yearbook. She was submitted twice last year but didn’t make the final cut. She thought if she stayed in character, she would get voted most spirited. She’s 8 and in elementary school. I think it’s funny getting into the yearbook is her goal.

On Halloween it was the same thing. She screamed off with their heads at the first group of kids she saw. Her friend who is in kindergarten, and I don’t think has seen the movie, looked shocked and said, “well that was just rude”. Every door they went to she was complimented on her costume. She said it was the best Halloween she has ever had with her Queen of Hearts costume.

The dress of the Queen of Hearts costume is three different materials purchased at Hobby Lobby. Hobby Lobby seems to be the best for inexpensive gaudy material. We put as many little jewels as we could fit on the front of the dress. The front triangle piece is quilted and a bit on the heavy side due to the jewels. My husband 3D printed the crown and scepter using designs created by people on Thingiverse.

The flamingo is a PVC pipe that we used paper mâché on. We added feathers and covered it in mod podge to keep the feathers from making a mess. This ended up making the flamingo a lot heavier than anticipated. My husband laser engraved the wings out of craft foam. The wings came out amazing and really added to the flamingo. We were running out of time and had to slap it together since my daughter really wanted it.

The card collar ended up being the hardest part. I hot glued the playing cards but they did not want to stay together. I wasn’t sure if it was the wax coating on the cards or if my glue was just old. In the end they held together both full days of wearing it and it was commented on the most. The wig is a child sized Hocus Pocus wig. We couldn’t find a red queen wig for kids and my daughter really wanted the heart shape. She ended up with “twining wigs” with her teacher from last year who dressed as Winnie from Hocus Pocus. That seemed to be the highlight at school.

Take a look at more cool Alice in Wonderland costumes…

Queen of Hearts DIY Costume for a Girl