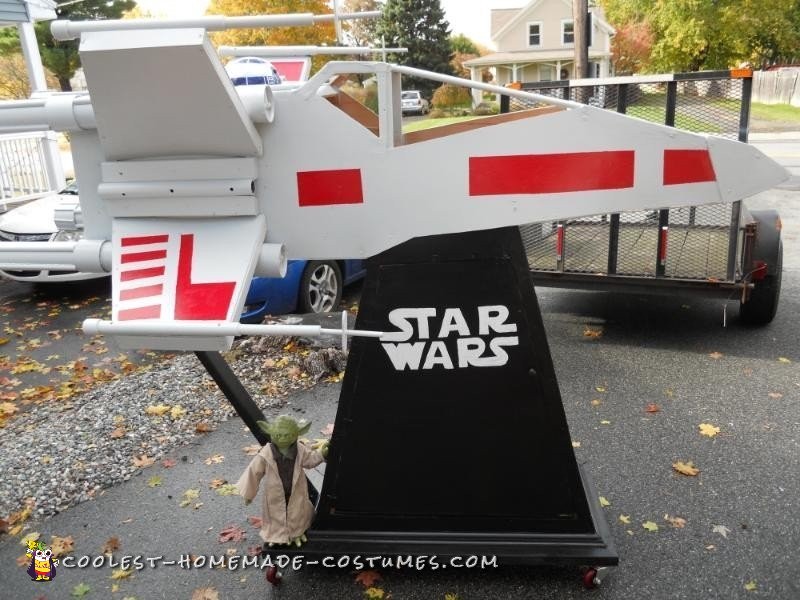 For the past 15 years, I’ve been going to my friends annual Halloween party in Woburn MA. The party attracts anywhere from 200-400 people and each year I have won the “best overall” category which means that after the party, I usually begin thinking about what I want to do the following year to top the last. Also, due to my creative costumes, people begin asking weeks/months in advance what I will be but I never tell.

With Halloween 2015 approaching, the speculation began that this might actually be my friends last Halloween party (he’s been throwing it for over 25 years). So I decided that either way this would be my last huge costume (basically, every year I come dressed as a large walking talking prop which makes it impossible to get around, dance, etc). So early this past summer I decided to “go big or go home” and came up with the ultimate out of this world costume.

Star Wars has always been one of my all time favorite movies and with a brand new movie coming out later this year, I decided what better costume than the Red-5 X-Wing Fighter. Now although I always come up with the idea and plan exactly how I want it, I’m not the most skilful person when it comes to executing the project…which is where my very creative, talented, awesome father comes in.

For the past 15 years he’s been the creative genius behind all my Halloween master pieces so when I suggested the X-Wing he was eager to begin (he’s also a big Star Wars fan). The project began in early summer, around June with several trips to Lowe’s. One thing I did not want my X-Wing to do was have my legs showing like ones I’d seen in the past that look like the ship flew through the pilot. So the first thing we built was a base stand on wheels so my lower body would be hidden.

The base, which had a hinged door on the side, was made of thin wood so it could be manipulated any direction we needed it to go. We bought some nice sterdy swivel wheels to place on the bottom so I could walk around and they would roll whatever direction I needed to go.

The ship was built also out of wood and pvc pipes for the exhausts (the night of the party I stuck glow sticks inside to light it up). My little R2-D2 unit was made out of a small trash can I’ve had for years and was hand painted to look just like an R2 unit. Due to the weight of the ship, the back needed an extra support beam so that was a last minute addition. A few weeks before the party I was in FL and visited Disney World where I found a vinyl Yoda doll that I thought would look perfect standing next to my ship on the base.

Yoda was placed in a doll stand and drilled on so he wouldn’t fall off during the party. Last but not least, the entire ship (base first) was hand painted including the Star Wars logo on the sides of the base. The night of the party, I had no idea how I was going to get the X-Wing there. Luckily the hall is just down the road from my parents house and I always help decorate the hall the night before so for the first time in 15 years, people saw my costume before the actual party, everyone who was there decorating, loved it!

I placed my ship into the halls closet where I would jump in it the next night. I am also a DJ and my partner DJ’s the party every year but this year he double booked so I took over and DJed until he arrived. The first 2 hours of the party, I stood behind the DJ table in my X-Wing pilot uniform DJing the event. Once my partner arrived, I went inside the closet with my wife (who was dressed as a female Storm Trooper) and waited for my partners cue.

A few minutes later my partner made the big announcement that “Charlie King has arrived” and to focus their attention towards the double closet doors. My partner then hit the Star Wars theme and out I came lead by my Storm Trooper wife. The 400+ people went absolutely nuts. Then once we made it to the dance floor, we were joined by several other Star Wars characters that were in attendance including the mighty Chewbacca and Obi-Won Kenobi!

It was a memorable night for sure and if this was the last Halloween party, it couldn’t have ended better. I ended up winning 2 trophies that night – 1 for “most original” and 1 for “best overall”. After it was all said and done, I had a trophy made for my Dad to recognize and honor all his wonderful hard work through the years…The trophy read “Charlie King Sr. Worlds Greatest Costume Maker and dad”. He loved it! ; ) 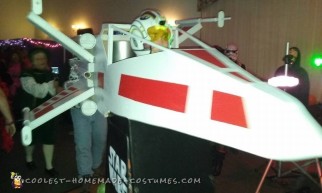 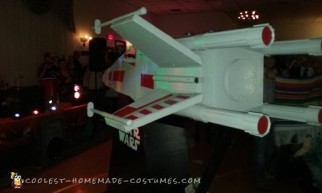 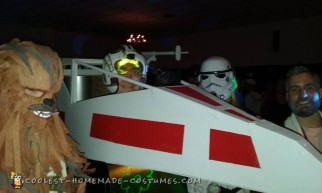 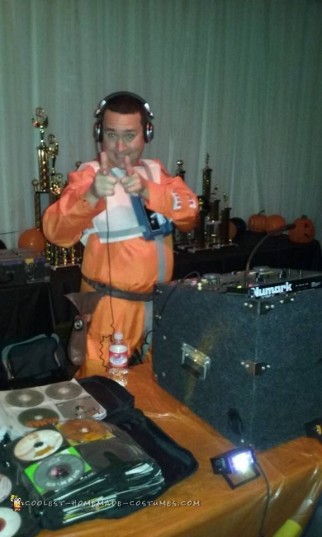