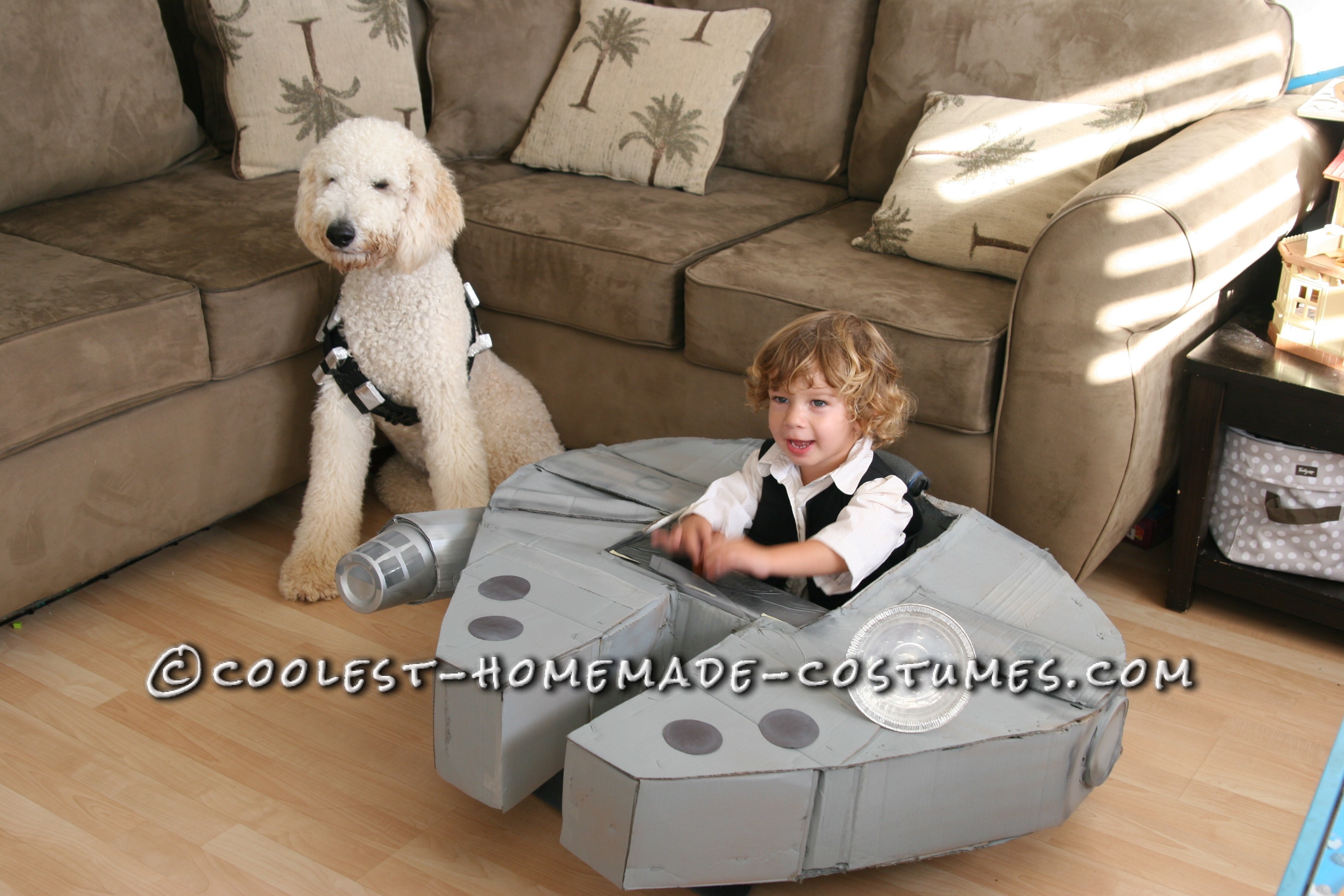 I’ve always loved Star Wars and wanted to do something different then the common Luke Skywalker which everyone expected my blonde boy to play. Then everyone assumed I would be Leia but I thought it would be more accurate for a mother of a toddler boy to be his bounty hunter.  So I was Boba Fett, the bounty hunter, who chases Han Solo.  I am always on the run trying to catch my little scoundrel space pirate Han.

But it took a village of awesome friends for me to realize my dream.  A mommy friend took pictures from online and sewed a true replica of Han Solo’s vest with all the pockets for my boy.  AMAZING!  I tea dyed a button down shirt I got from Goodwill to get the off white color of Han Solo’s shirt and hemmed the sleeves.  I took some blue dress pants from my boy’s dresser and fabric glued the correlian blood stripes down the pants (made from cut felt fabric with sharpie line drawn across it every half inch.  We used foam sheets to make Han Solo’s belt and holster.  My husband helped with the sewing of the holster and the rest of it was completed with the wonder of brads and glue gun.  Rubber rain boots functional for costume and rainy day weather finished out his wardrobe.

Our furry labradoodle made the perfect Wookie sidekick.  I borrowed a military belt from a brother and aluminum foiled my son’s wooden blocks and then taped them all on using black electric tape.

But Han Solo and Chewbacca needed their ride.  A retired uncle who is a collector and creator generously built our millenium falcon in a few days.  What’s great is that he reused items he had around the house.  Turned trash into treasure. Cardboard boxes, a pie tin for the satellite, and a reused plastic take out soup container for the cockpit of the falcon.  Only money spent was on the silver spray paint.  AWESOMENESS.  Thank the Lord for awesome strong stapler and staple guns.  We made it so that the falcon can fit on my son’s push car.  Unfortunately no jets on it to get it to light speed.

I was just so excited to have a costume that was put together in love by friends and family.

As our son cruised around in his falcon, we got compliments and respect from the Star Wars fans.  A lot of dudes who said, “That’s awesome.”  For those who know the force, they recognize the Millenium Falcon.  And there was an immediate bond or force that drew us together.  I thought the Millenium was the most fitting ship to represent Star Wars.  It transported all the main characters throughout the whole trilogy.  After opening the eyes of those unfamiliar with the Falcon and its Captain and first mate, I feel a need to educate the young and those who are not familiar with the Star Wars series.  So our costume is not just a costume but a beacon to educate the young on the way of the snarky space pirate and other true heroes in Star Wars other then Leia and Luke.  BUT my little Han Solo did find his true love counterpart at one of the costume contests we entered (gotta check out the kissing and hugging pictures that our wonderful, surprisingly compliant children, posed for multiple times.  :>

Long Live Chewbacca!  Our furry Chewbacca was unfortunately too large for the ship but is a faithful companion nonetheless and is currently studying Wookie.

We, sadly, haven’t won any costume contests yet but I must remember what is truly important – celebrating the force and educating my toddler and others to the epic saga as we cruise by them or sideswipe them with our wide Millenium falcon.  Watch out trick or treaters, make way for the Falcon on that sidewalk.  I’m thinking I should have made a hidden compartment for the candy in the falcon.  :>

Not sure if Halloween will be the last voyage of the Millenium Falcon.  It may be played with for months to come until the falcon can’t handle one more toddler jumping on it.  May the force be with it! 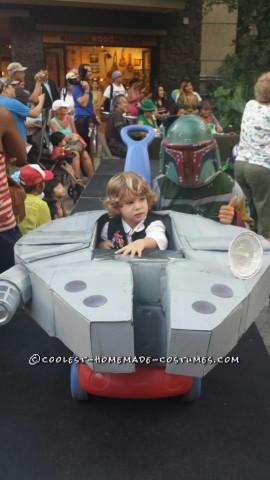 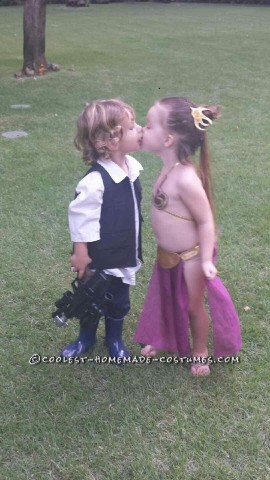 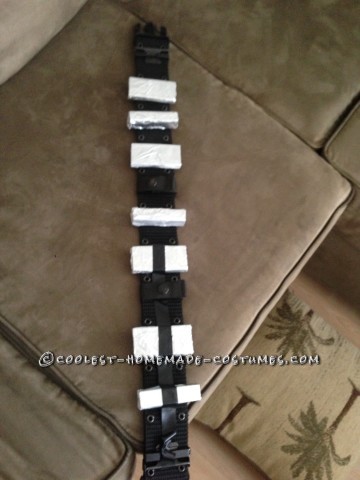 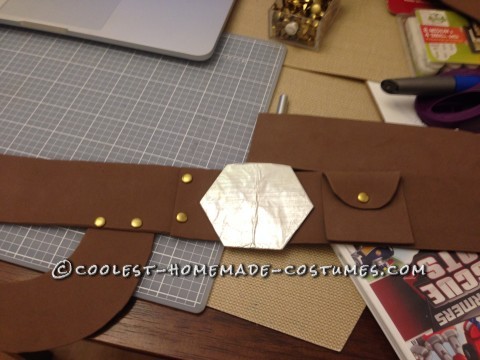 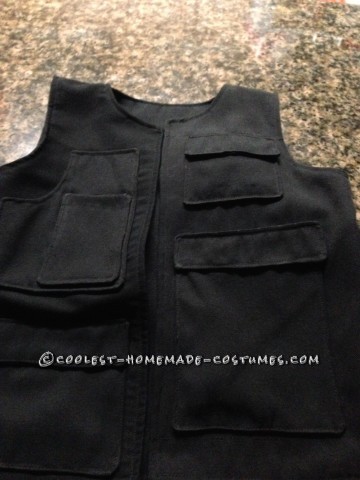 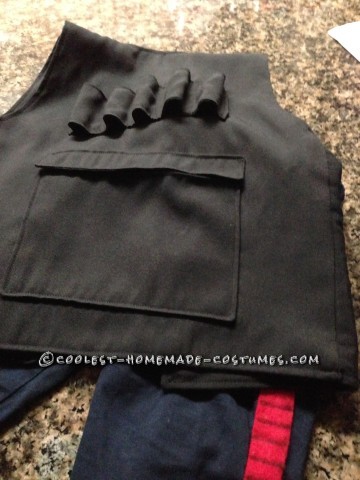 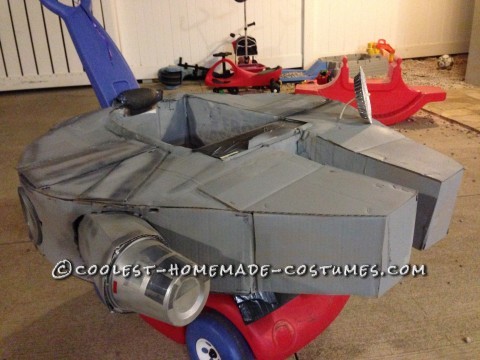 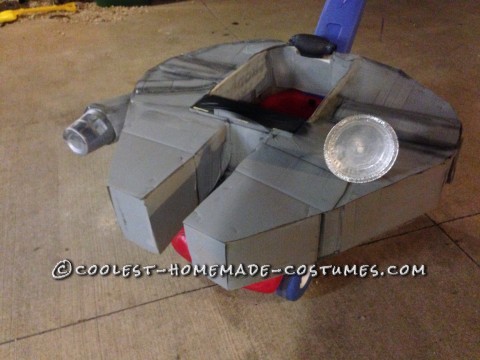