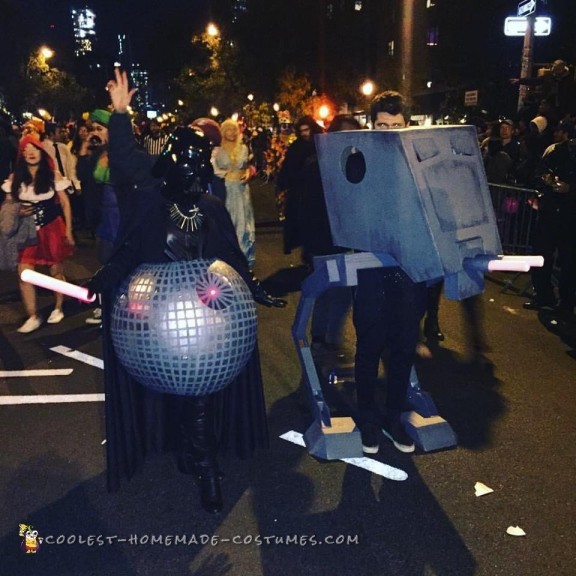 AT-ST, Kevin’s Perspective:
With the new movie due out in December my wife and I wanted to dress up as something Star Wars related for Halloween.  I initially wanted to dress up as one of the large 4 legged AT-AT walkers but realized that to do it right it would involve 2 people and my wife refused to be the ass-end of the costume and work the rear legs.  That’s when I remembered the smaller 2-legged AT-ST “chicken walker” from return of the jedi.  I decided to make the costume out of cardboard but I needed to figure out a way to get the proportions right for me to wear.  Due to the popularity of Star Wars, the internet has a ton of images for the walker.  I used AutoCad to sketch a simplified drawing of the walker with the correct proportions from all the images I downloaded.  I then took measurements of myself and adjusted the dimensions of my drawings to scale them to a size that I could wear as a costume.  After that, I used a large format plotter to print out the full size pieces which i glued onto cardboard and cut out with a utility knife.  I then assembled all cardboard cut-outs and hot glued them together.  I am pretty good at using AutoCad and have access to a large format plotter because I am an engineer and its what I do for work.

There are two main parts to the costume: the bottom torso and legs which fit around my waist and are held up by a pair of suspenders and the top part which rests over my head or on my shoulders.  I also made arm holes. The legs are jointed with 2.5″ lag bolts from home depot.  The cardboard feet have industrial strength velcro that I can attach to their counterpart which I sewed onto my sneakers.  The legs are fully articulated and look great when I walk.  Next I spray painted the whole thing battleship grey and my wife added weathering effects with acrylic paint. I inserted (2) LED lights in the gun barrels to simulate laser cannons.  The legs also fold around the torso for easy storage and transportation of the costume which was unintentional but definitely came in handy while lugging the thing through the NYC subway system!

On Halloween my wife and I took the subway down to Canal Street and marched in the 2015 NYC village Halloween Parade in full costume.  She ended up going as “disco death star” darth vader and made a 3foot diameter paper-mache death star that she wore around her waist.  Everyone loved our costumes!  We marched up 6th Avenue all the way to 18th street and couldn’t get more than 10 feet without getting stopped for a picture. People would say “Star Wars! That’s amazing! Best costume I’ve seen yet”.

I am a first-time pregnant wife who loves Halloween, so I wanted to do a costume that suggested I was pregnant without actually showing I was pregnant. The reason for this being my belly wasn’t big enough yet to look pregnant–just fatter–and also I had not announced publicly on Facebook that I was pregnant yet, so wanted to still hide the chubby belly until i was ready to announce! I Googled “Pregnancy Costumes” and got a lot of basketball bellies, pumpkin bellies, dolls glued onto bellies, and even a Death Star belly, but none of them worked because my belly wasn’t big enough. But then I saw a big disco ball costume which I loved. However my husband and I like to do costumes together, and he refused to do a 70’s disco character (been there, done that in the past) so I told him about the death star belly, and he said I could combine the ideas–instead of making a giant disco ball, I could make a giant death star! I decided to make it a death-star-disco-ball because I wanted it to be shiny, haha. So he also suggested to dress up as Darth Vader so people would know it was actually a death star and not just a half-assed disco ball. Ladies and gentlemen, the Darth Star was born.

First we ordered a giant round balloon 36 inches in diameter, blew it up, and did paper mache. We did two layers initially, hung the balloon from the ceiling, and put a box fan on it to dry faster. I then did 3 more layers, one each night, letting it dry for 24 hours between each layer.  Once finished, we popped the balloon, spray painted it solid grey, then cut the holes for the head and legs. (Legs a little wider to allow for easier walking) We also measured and cut a hole for the death star laser, which we later glued back on backwards to create the indent (amazing to have an engineer as a husband who knows all this stuff!)  I then used fine skinny tape we got at an art store to evenly make lines for the square design on the sphere (this took some time) Once finished, Kevin spray painted it again with super shiny chrome spray paint. (Please note-you could glue tiny mirrored squares but that would be VERY time consuming, and much heavier to wear–not for a pregnant woman such as myself!) We pulled off the tape very gently and I touched up any grey that got messed up iduring the painting process with acrylic paint. We then attached one long strap and measured it to be hung around the belly (like a bubble skirt) as opposed to directly under the arms, because my clothing wouldn’t fit in the hole that way! Kevin took apart an led flashlight we got at the convenience store and poked a hole in the laser, pushed it through, turned it on, and costume was done!

For the Darth part of the Darth Star, I used pleather maternity leggings and faux leather boots I already owned, then got pleather shirt, blazer, and metal necklace to give that Darth Vader touch. I did have to buy the mask ($26 from Rubies) and bought a magician’s cape which I folded the hood outside-in. Would have been cool to hand-make the mask or facepaint it, but I was worn out with the rest of the costume, being pregnant and all!

Walking through the parade was AMAZING–Kevin’s costume really just blew everyone away! Then of course they would notice me next and be equally surprised and delighted! I actually heard one person say, “She’s the Death Star, Darth Vader, She’s the Darth Star!” (That’s how I got the nickname) I also heard many times “Look, that’s pregnant Darth Vader! Giving birth to the Death Star!” That was great! 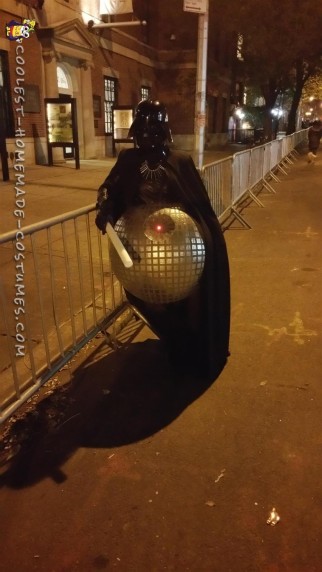 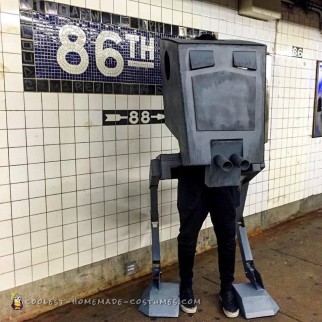 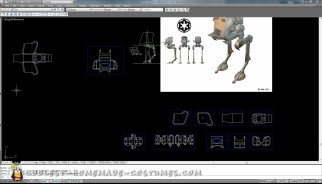 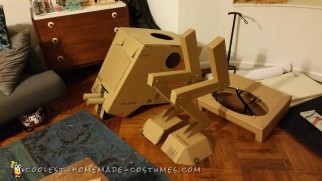 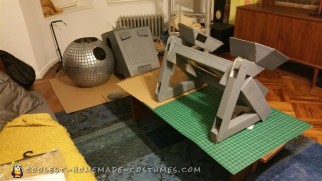 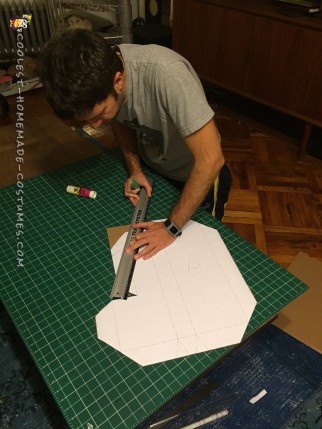 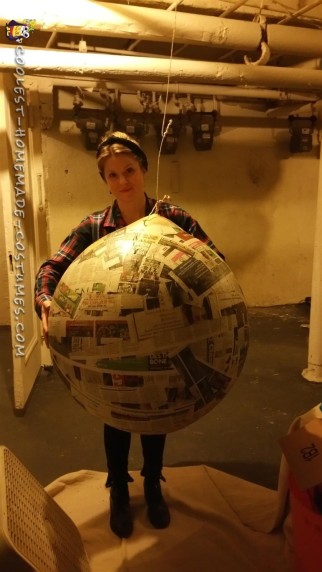 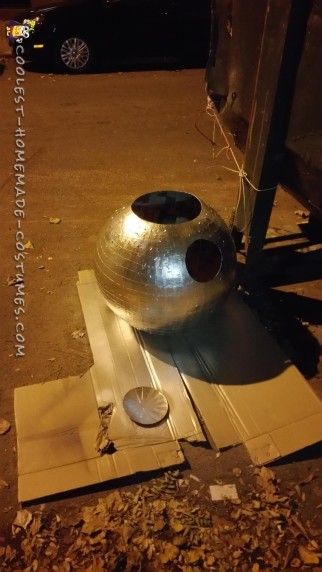 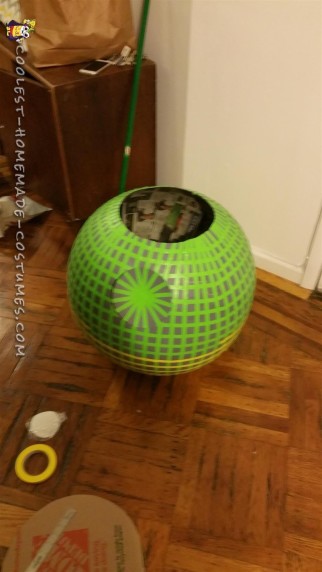