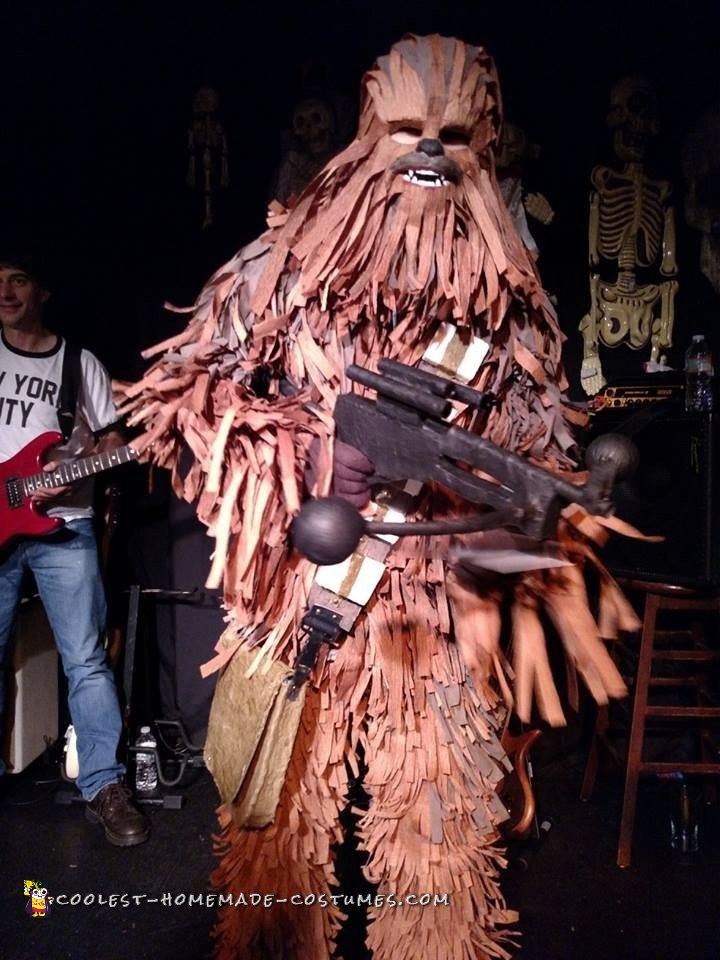 Every year I tend to go a bit overboard with Halloween. Not in the Halloween sense of the word but with a Halloween costume. Ive been to San Diego and New York Comic Con quite a few times and Ive always been fascinated with the cosplay. The craftsmanship, attention to detail, and overall creativity. While Im not into it on a daily basis, I do get into it on Halloween. Ive had this urge for years that every Halloween I have to make a costume from scratch. I have to pay attention to detail, and it has to be different.

My past costumes have included an authentic LOST costume, Ash from “Evil Dead”, “Max” from “Where the Wild Things Are”, Lando Calrissian from ” the Empire Strikes Back”. Magneto from “XMen First Class” and last year I went way on a ledge and made a Steampunk/ Kid Icarus mashup just to see if I could do it. It had retractable wings, working steam, lights and whistles. The whole nine yards. I didnt even know what Steampunk was at the time.

While they all have gotten a great deal of attention and admiration, this years was special to me. This year will mark the release of Star Wars: The Force Awakens and I knew I just had to go with a Star Wars themed costume. I toyed a little bit earlier in the year with a Piñata type costume but it never panned out, but going back to Star Wars, I thought “this piñata thing could pan out if I did it right. The one way it could work?… CHEWBACCA.

In early September I embarked on my scouting process. I test methods and techniques to see what would work best. I bought a few face masks, cut the chin, molded some clay to form a good face, but it never really looked “right” I then came upon a child’s talking Chewbacca mask in Toys R Us. I thought Ill buy this and use the voice box if I get my mask working (since it roared when you opened the mouth)Thing was the mask wouldn’t fit an adult. After many attempts I circled back to the Chewy mask and said “screw it”. I gutted the mask entirely just using the outer shell and lower jaw. I had to take all the electronics out and fabricate them back together since the gutted mask no longer held anything properly. From there I ordered some thick “cinnamon” colored paper spools online and begin simply gluing strips on to see what would happen. what did happen was utter excitement. It was exactly what I envisioned for a “Piñata Chewbacca”. I then decided to encase the face into a full pullover helmet. This involved more fabrication and much more paper, I even mixed up the colors. I had the electronics working, I had the mask complete and I loved it. Next was to make a body that “matched”

I found some old clothes and went to town cutting paper and gluing. Night after night I sat there watching tv, and gluing, thousands and thousands of strips of paper all over an old button up and some jeans. The entire thing came out great but it was missing something. C3PO!!!

With a few weeks left before Halloween I began making 3PO. I bought poster board and learned paper machete. I constructed a torso, waist, legs and arms, entirely out of paper. I found colored waxed paper threading and used it as 3POs exposed wires. Next it was onto the bowcaster. Again, MORE PAPER. I had to use thick poster board and layer it up to get it thicker, from there it was all more glue, more paper and some paint.  I was finally done. Every single inch covered in paper. Sure he wasn’t as tall as Chewbacca, but its Piñata Chewbacca and Piñatas are always smaller.

Two parts I wish went over better. The electronic Chewbacca voice could barely be heard at any event. It would require a stronger amplification. I may work on that. And in true Pinata fashion I had Chewy’s side satchel filled to the brim with candy. Most didnt put two and two together. The candy and pinata angle had to be explained a bit.. oh well

I managed to come in 2nd at one costume party we go to every year. I was happy. You get a great marble trophy. At another I managed to get 1st place.. It was very gratifying after coming in 2nd the year before (Steampunk/Icarus) only because all the judges didn’t get a chance to see me then. I learned my lesson. If you make a good costume SHOW IT OFF. Make sure people see it. Otherwise you can’t win….So this year they all saw Chewbacca and it paid off..so here I am. 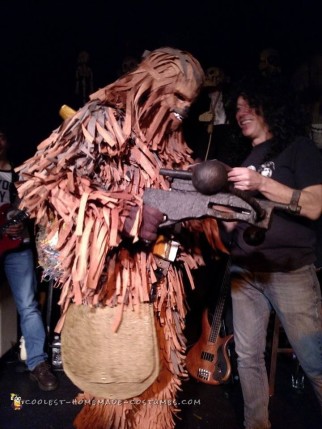 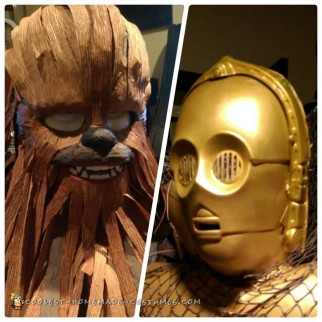 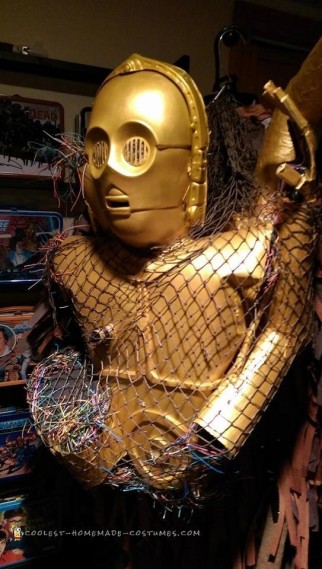 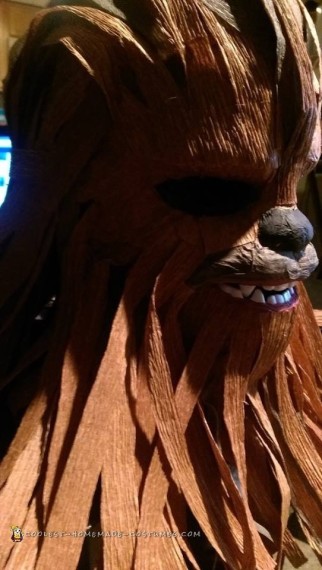 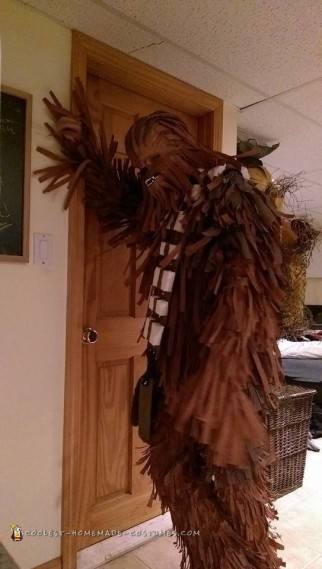