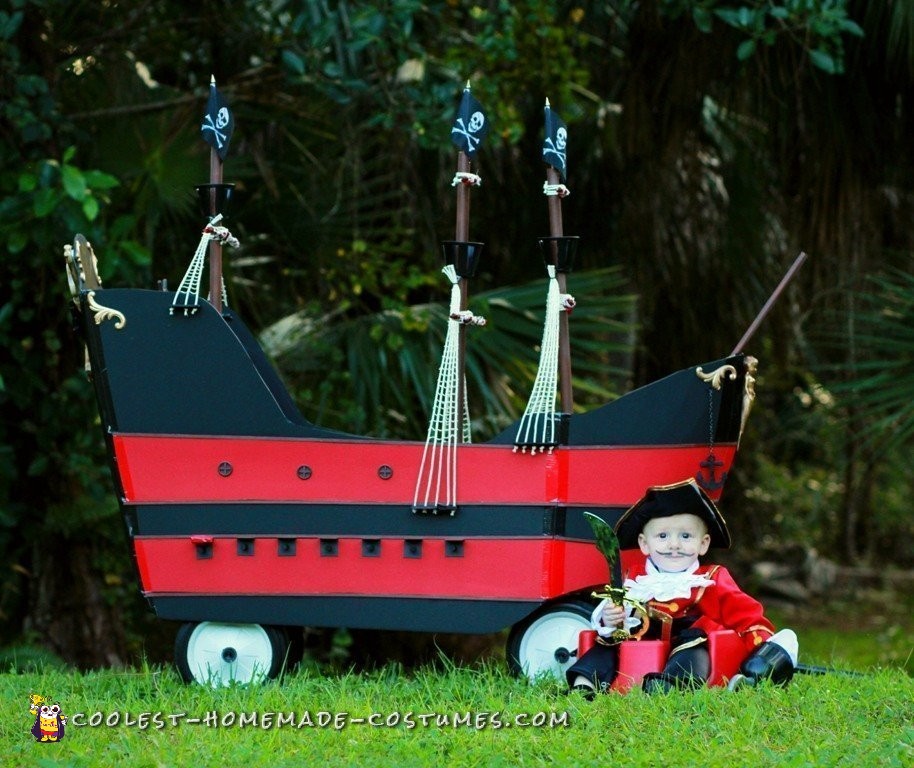 My 2-year-old daughter insisted on being Tinkerbell for Halloween this year, so I needed something that related to Tinkerbell for my 7-month-old son Myles. I wanted their costumes to relate to each other in some way.

My husband and I agreed on a Captain Hook costume for him. I browsed online and found the perfect Captain Hook costume and had it shipped to me. The only issue I was facing is that since my son can’t walk yet, I wasn’t too thrilled with the idea of pushing a little Captain Hook in a stroller. He needed his own Pirate Ship.

So I Googled “Wagon pirate ships” and saw that other parents had previously done the same thing for their children. However, they were just pirate ships. My little Captain Hook needed his Jolly Roger. So I took my husband’s old childhood wagon out of our garage, cleaned it up, brought it into our living room, measured it and took off to some craft stores to begin my project.

So now I Googled images of wagon pirate ships and I took the basic idea of construction and applied it to my project. Some parents used wood for the main base which was completely out of the question for me. I had no tools for that. Plus, it would have been incredibly heavy and I needed to be able to lift this thing myself to put it in my vehicle. Some other parents used cardboard which is a great idea but I didn’t want to deal with painting it.

At a craft store, I purchased black foam board and a red poster board to cut out for the sides of the ship. I also bought cotton rope, string and red and white cloth for my sails. I then went to Home Depot and purchased spray paint, dowel rods, very thin wood trimming, duct tape and lots of super glue.

Along the way during construction, I started purchasing accessories for the ship like a pirate ship wheel, Jolly Roger flags and a mermaid figurehead for the bow of the ship. People were SHOCKED as they saw us pull up in this thing.

So many people asked where I bought the pirate ship, and they were blown away when I told them that I actually made it. We were interviewed by the local news media and had our photo taken, along with several other people requesting photo ops with the ship.

My son was one, very popular pirate! What makes this special to me is that I didn’t trace anything, I didn’t have a mold, nor did I have a pattern of any kind. This wagon pirate was completely made free-hand, using nothing but photos and drawings of the original Jolly Roger Pirate Ship from Peter Pan as a guide. I am extremely proud of this ship and of myself in making the most memorable first Halloween ever for my 7-month-old son. 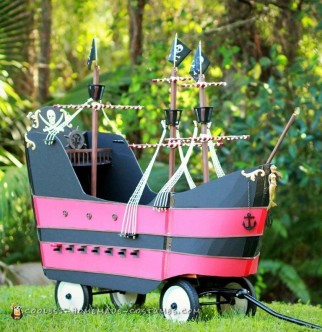 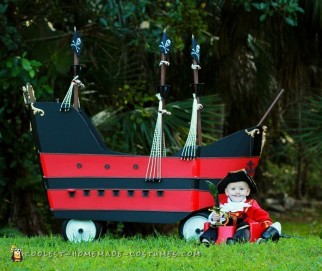 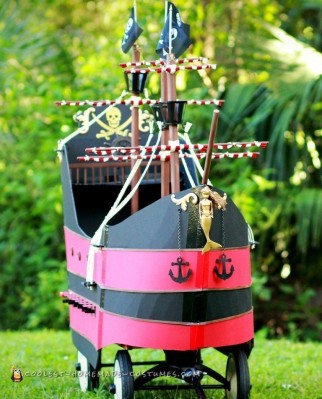 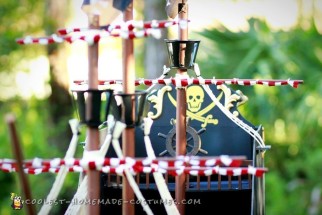 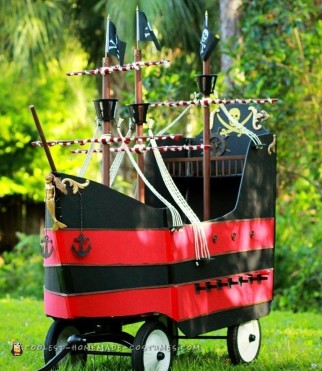 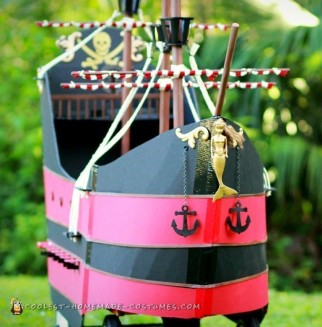