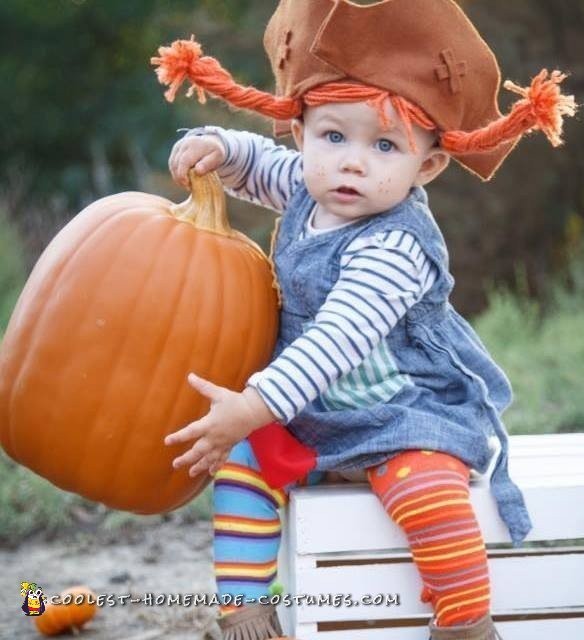 As a redhead myself with years of experience portraying Pippi Longstocking for Halloween, it was only fitting to pass down my throne/braids to my first born daughter, Quincy. At 13 months, her spunky optimism and personality makes her a real-life Pippi. A true natural for a toddler Pippi Longstocking costume.

Creating the costume itself was the easy part. She had a striped t-shirt and jean dress already. I also had a box of fabric swatches that I tore up and stitched to her dress. Her “long stockings” are from the .99 cent store. Her hat was made from brown felt, orange yarn, and orange pipe cleaners. We cut 20 8-inch pieces of yarn, and braided them to create the braids. We then stuck the pipe cleaners inside the braid making sure they would not be seen.

The pirate hat was a brown reindeer hat from the craft store. We ripped all the reindeer pieces off of it so it just gave us a brown round hat that we cut to fit her head. With brown felt, we cut pieces out and glued them to the round base, to create the pirate look. We then glued the pipe cleaner braids on the inside of the hat so that it would look like natural hair. “Mr Nielsen,” her monkey, was a monkey we had in her stuffed animal collection, as was her signature best friend, her horse!

The pirate ship was created from a box, hot glue, and a permanent marker. We used Quincy’s push car as the base of the ship. Then we cut up a cardboard box into pieces of a ship, making sure that they would fit around the structure of the car. The ship is made to be easily removable so that it can be transported separately from the car. It fits snug around the car, while leaving space for Pippi to sit and be enclosed.

As Quincy is 13 months, she likes to get up and move around. But this ship helps her stay safely enclosed inside and entertained. The most impressive part of the ship is the secret compartment that looks like a treasure chest. This can actually open up for Quincy to put her candy inside. The water around the ship is made of plastic table cloth cut into strips. This also helps disguise the wheels of the push car. The sail is created from a wrapping paper roll and old rags. Although this costume is time consuming, most of the materials used are from things that most people have laying around their house. So it can be pretty cheap to make.

The best part about Quincy’s costume is the reactions we get when we “cruise” down the street, at fall festivals, and at Halloween events. We often get comments such as, “You win Halloween,” “Best costume ever,” and “That is the most creative costume I’ve ever seen!” People love dropping the candy into the treasure chest when she reaches up to open it for them. They love to see a costume that isn’t your typical super-hero or princess. Even though little kids don’t understand who the character is, adults love to be reminded of a cherished character from their childhood.

Many come up and take pictures with her, and Quincy enjoys every minute of the attention! Even if you don’t know who Pippi is, you can’t help but smile when you see a baby with braids driving a pirate ship. Anytime we take her out of her ship, adoring “fans” line up to take a ride in her ship.

Quincy won first place in the Laguna Hills Mall Costume Contest for the most creative costume category. The judges were taking pictures with her, even before the winners were announced. We hope this toddler Pippi Longstocking costume idea shows people how elaborate you can get on such a small budget. And we hope to see many more generations of Pippi Longstocking in the future! 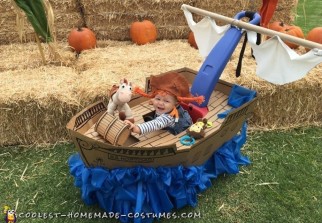 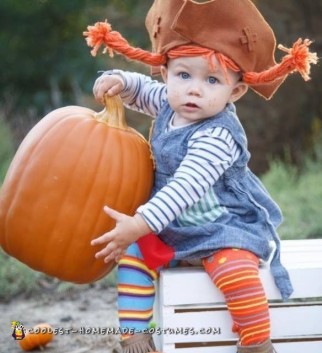