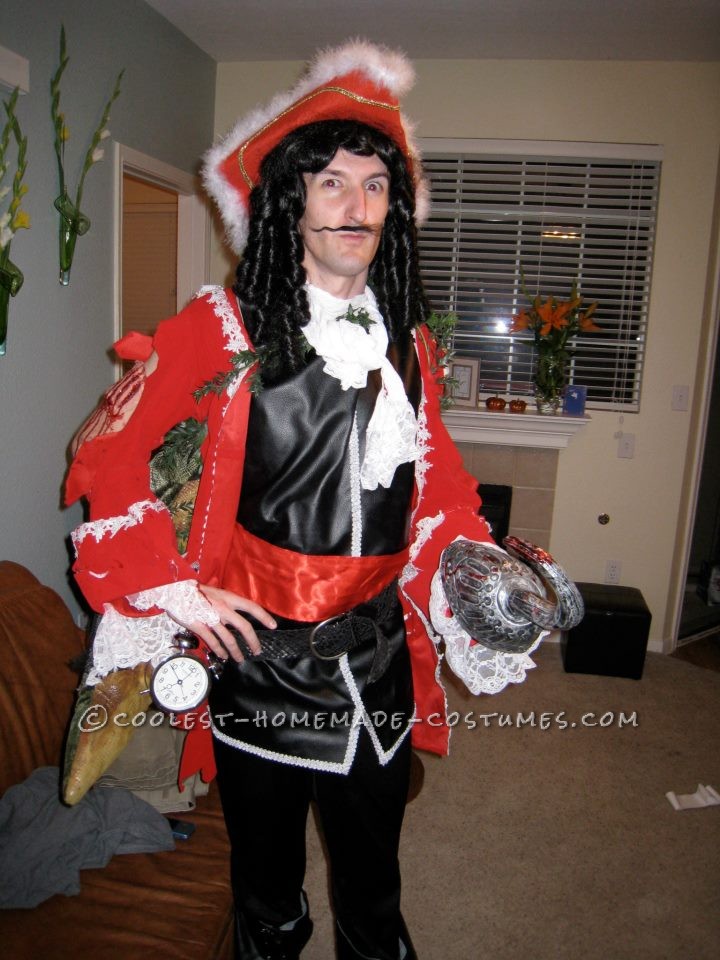 I always thought it’d be a cool idea to do a Disney villain, and when I thought of doing an original Captain Hook, I wanted to stand out from all the other Hooks. So I thought it was a really good idea to go as Captain Hook, Post-Crocodile Battle. You know the one. The crocodile that ate Hook’s hand. My vision was to be Hook as if he had just emerged from the ocean battling with the infamous crocodile and finally defeating it, wearing it on his back, returning to his ship. Or is the crocodile still alive?

At first I knew I was going to have to put together a pirate costume, and then shred it apart here and there. I found a cheap hat and ripped it apart as well. Then I wanted to go for that cartoony look with the black thin mustache that sometimes has a life of it’s own, changing shape when frightened, or curling when a mischievous plan has been hatched. So I got some spirit gum and costume hair and created half of the mustache to zig zag in a cartoony shock form, with the other half of the mustache shortened and frayed, presumably ripped off partially in battle.

The next step was to add the crocodile. I went to some local bait and fish shops to see if they had any crocodile heads, to which they did, since I was thinking of hanging it from my belt, but they were extremely pricey. Instead I found out that my mom had saved some stuffed animals from the kid’s childhoods, and one of them being a giant stuffed crocodile, which was perfect, except it was way to heavy to carry on my back. So I took out most of the stuffing and sewed it back together.

Onto the finer details, I bought some plastic vines and leaves to hold up the crocodile on my back, and to stuff in my boots, since I am coming from the sea, I obviously should have come in contact with some seaweed at some point. And then I decided to add some humor to the crocodile and bought a small fishing net, some realistic looking fish lures (removed the hooks), and hot glued them onto the back of the crocodile, showing that he snagged some extra sea friends and netting during the battle. When I was buying the net and lures, the cashier asked if I was going fishing, to which I said, oddly enough, this isn’t for fishing.

The next step was to cover myself in battle scars and then pour on the fake blood. I also had an old alarm clock to attach onto my sister’s “pirate” belt I used, and found a hook in a costume shop that I dipped in some fake blood as well.

The hardest part was then attaching the crocodile onto my pirate jacket. The vines had to be pinned all over the place, and I basically had to lay down or get some help to put the jacket on, and then have some more vines wrapped under my arms and tied together holding the weight of the crocodile so it didn’t feel like I was carrying around a sagging backpack full of textbooks. Once that was finished I put some even finer details to my hand that would be holding the hook. I knew I wasn’t going to be holding the hook the entire night, so I had to have a back story as to wears my hook? And I had a story, I painted my hand a pale dead color and then added a stitch scar covered in some blood around my wrist indicating that I had reattached my hand that I retrieved from the crocodile after the battle.

Finally the night could begin. After arriving at a friend’s house, doing the monster mash, and reveling in each other’s costumes, we went out on the town. While out and about, I ran into a rival Captain Hook, we had a sword fight and he instantly broke my sword. I claimed that mine was worn from the duel with the crocodile.

We made it to a bar and did a lot of dancing, which was a challenge, but still a lot of fun. It was a little hard to get through crowds with the crocodile on my back, but people loved it, taking photos, and always asking if the crocodile was too heavy to carry, or asking where Peter was or Tinker Bell. Unfortunately I didn’t win any costume contests that night, since I didn’t really enter any properly, but a girl dressed up as Super Mario did give me her number since she liked my costume so much.

By the end of the night, a lot of us that went out together to begin with had split up. I found a friend of mine, yet we were locked out of the place we were staying at. Our phones and keys were inside, since I had no pockets to carry anything. So instead of waiting around, we decided to talk a 30 minute walk to another friend’s apartment who was luckily awake. The walk seemed a lot longer since we were still in our costumes, mine a lot more battle worn now, and after making some stops for food, I was too tired to get out of my costume and slept in the whole thing crocodile and all. Good night out overall!

6 thoughts on “Original Captain Hook Washed Up On Shore Costume”