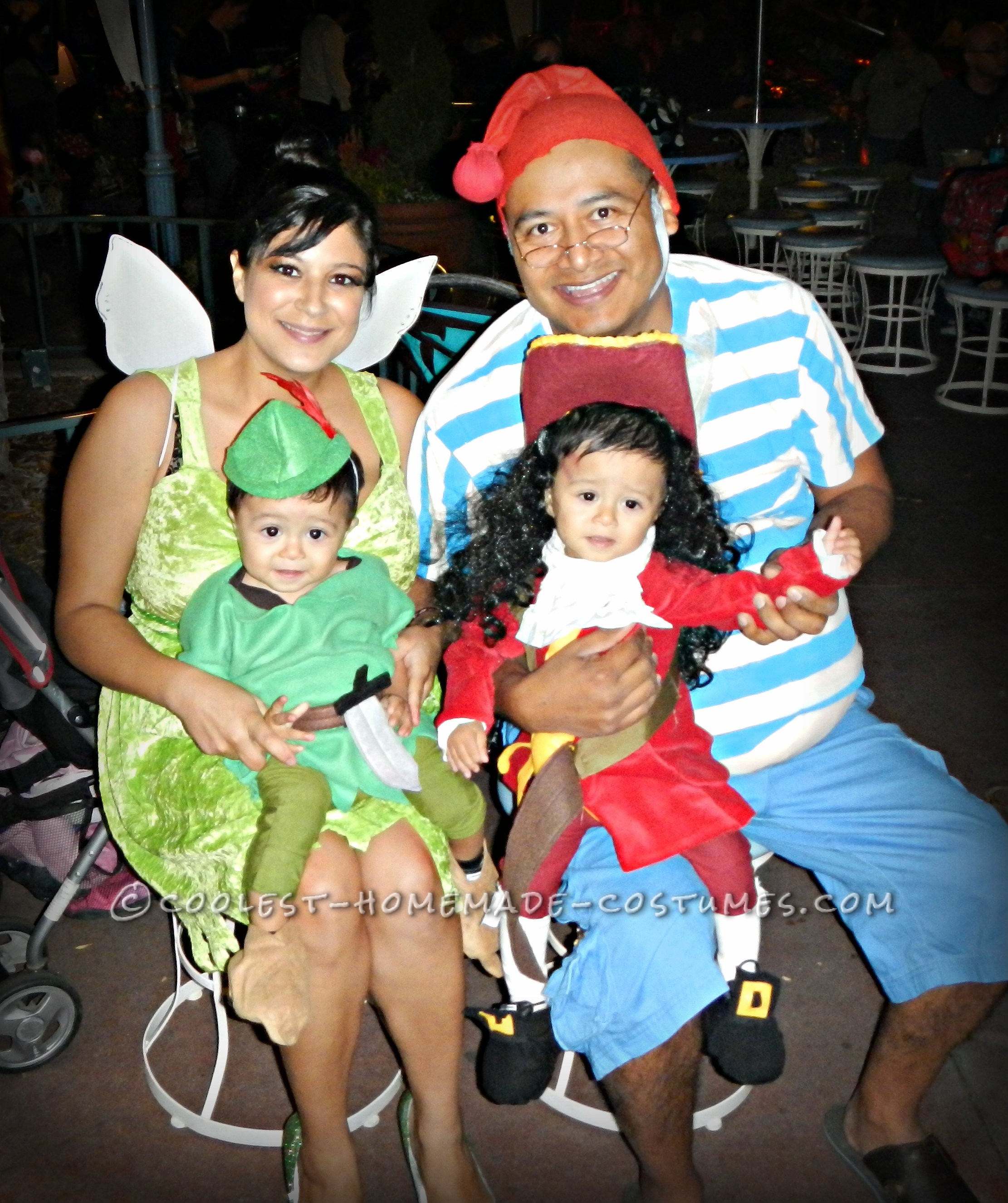 After weeks and weeks of debates about what our baby twin boys would be for halloween, this year, we decided on Baby Peter Pan and Captain Hook. We wanted to stick to a disney theme we could do as a family because we were planning on taking them to the Disneyland Trick or Treat “party.” I went as tinkerbell and Daddy went as Mr. Smee. Convincing him to be Mr. Smee was not easy as well. He kept complaining that he thought it was “lame” and that no one would recognize him. In the end, he ended up LOVING his costume because we only saw one other Mr. Smee at Disneyland, everyone kept saying how cool he looked, and he thought he looked better than that one other guy, lol. Anyway, we initially decided on Peter Pan and Captain Hook because we thoought it would be easy to find these costumes at the Disney Store. Little did we know that the only baby costumes the disney store had for baby boys was Buzz and Woody (and they dressed up as them last year), or Mikey Mouse. So after thinking long and hard and looking practically everywhere online for cool costumes, with no luck, I decided to make them. I underestimated the amount of time and hard work this would be…

For the baby peter pan and Captain hooks, I bought the fabric at a local store and basically just taking some jackets and pants the babies already had and kind of made my own pattern of what I thought would turn out looking like a Jacket and peter pan “shirt.” I was quite pleased when I saw the results, but if anyone asked me how I made that Captain hook jacket, I would not be able to tell them. I basically just “studied” one of their jackets and went from there. Didnt.’t draw any templates, just directly cut and started to sew the fabric. I then added the accessories of ruffles and gold ribbon. For the “sword”, I used a brown ribbon and make the sword with felt. For the hat, I used a childs cowboy hat, covered it in felt, and cut some hair from an old wig we had and glues it to the inside brim of the hat. For both pants, I did the same as the jacket. Studied one of their sweats and just started cutting and sewing. For Peter Pan’s Shirt, I cut out a “shirt” from fleece, made a v-neck, then cut the triangles out of the edges. For the belt, I made it all of felt and attached it with velcro at the end. For the hat, I also just studied one I saw online and began cutting. Then added the feather and elastic. For the shoe covers, I just cut fabric, measured it with the shoues they’d be wearing, and added elastic to the bottom so it would wrap around the bottom of their shoes and stay.

I also thought Mr. Smee would be easy but it wasn’t. I looked everywhere for a shirt that I thought would resemble the one of Mr. Smee, but since I couln’t find one, I bought a white shirt, blue fabric paint, and a sponge roller. I used painters tape to make the lines, and then I rolled the paint onto the shrt. Like painting a wall, lol. Hubby already had the blue shorts and the brown sandals. For the hat, I found a felt santa hat from the dollar store, cut out the white fur, then covered the white ball with red. We found some reading glasses at the dollar store, and used white pillow stuffing for his sideburns. Then we bought a pregnant belly from the halloween store to make him look like hehad a bigger belly, and there we had it.

After a whole week of hard work, we felt it certainly paid off at the responses we got at disneyland. Daddy felt “cool” because for a loooong time, he was the only Smee we spotted, and everyone kept pointing out how cool his smee costume was. Everyone also kept ooohing and aaaahing at the cute babies in the Peter Pan and Captain Hook costmes.

On Halloween day, trick or treaters kepts saying how “perfect” iour costumes were and how they were such a perfect idea for the twin boys. All in all, it turned out to be a great halloween!! Can’t wait for next year again!! I don’t think I’ll ever BUY costumes again! I love the feeling of having them homemade and have everyone babble over how great they look! It makes me feel so accomplished!! 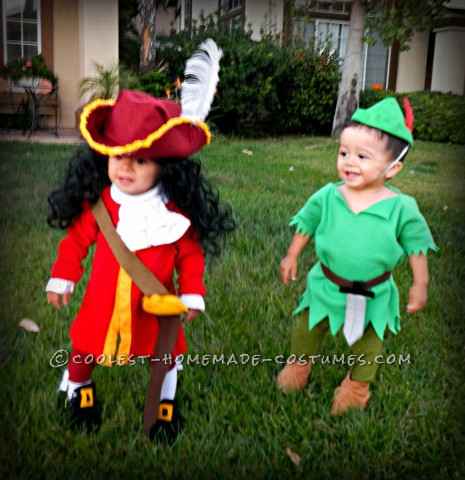 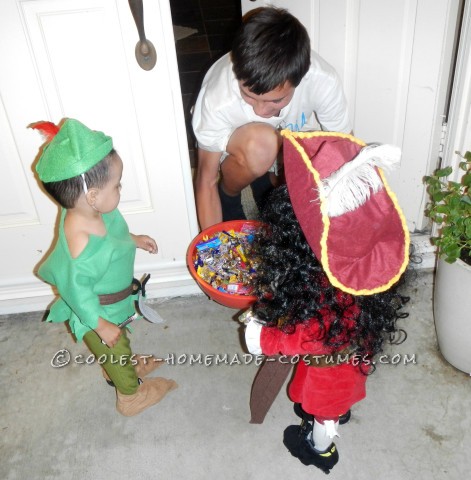