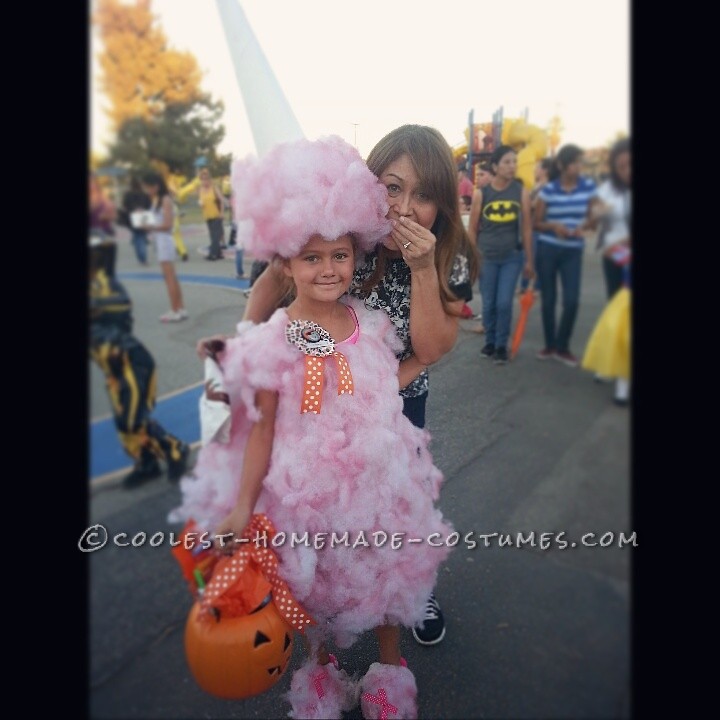 This costume has been recreated because of it going viral and also by request. So here we go again! This was just as fun to make the second time around, and I may be partial, but I think Journey looks even cuter this four years later. ;)

Originally, I was with my daughters at the Los Angeles County Fair and I had seen people watching trying to come up with ideas for another fun costume. You see, we have kind of made this a tradition. As I watched a little child devouring her fluffy pink cotton candy, I immediately knew I had to somehow turn my daughter into this fluffy cloud of pink sugar! After about a day, I came up with my plan and the next day, this costume was born.

So this is what you are going to need:

Use the adhesive spray to attach the pillow fill to the t shirt. Spray with pink paint.

For the cone, roll the poster board into a cone shape. Secure with adhesive spray.  After measuring elastic to fit child’s head, attach to sides of cone.  This is the optional part. You can either attach more of the poly fill to the cone or use a clown wig with the fill that has been attached with the adhesive spray. I’ve tried both ways and either way works just as great as the other.

After completing the costume, the cotton candy or vanilla body spray added a nice touch and it took away the scent of the paint as well.

My daughter actually had a bag of pink cotton candy with her and she pretended to pull some off herself and gave it to people walking by. It had them believing that she was actually really made out of real cotton candy.

This costume won a few contests in 2011. This year it won first prize in a contest at school as well as one private costume contest. We went to a nearby city to walk around and the response we received for this costume was overwhelming. The people handing out candy would actually take photos, give her giant candy bars, actual cotton candy, bubbles, or other items they had in their homes. At least 20 people asked to take photos of her or with her that night. Our favorite fan was a woman with a few friends. They screamed when they saw her and the woman screamed, “Oh my gosh, I just pinned her!” She proceeded to tell me how she had just pinned my daughter on Pinterest the week prior and that she was going to create the costume. She ran out of time but will make it next year. I was able to direct her to the website where I have directions. They asked for her autograph and took a picture with her. It was classic. I thought my daughter was embarrassed but after seeing her face it was pretty evident she was loving the attention!

This costume is a hit and we loved creating it and having her wear it a second time around. It has been seen on the channel 5 news, as well as many other sites and blogs on the internet, including eBay’s blog page and being pinned over 100,000 times. We were recently invited to be on the Meredith Vieira show, but we were not able to fly out the week of the show. The costume can be seen on the home page of her website. 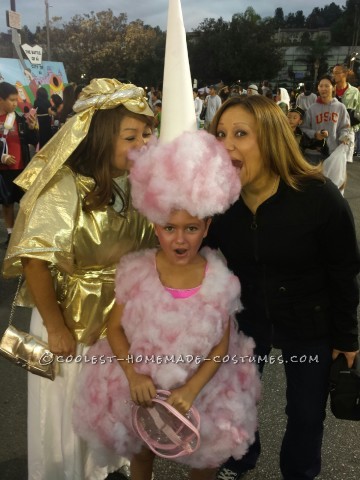 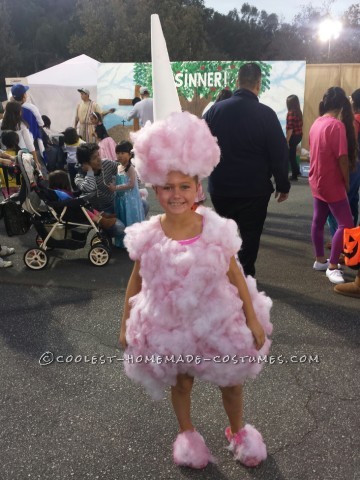 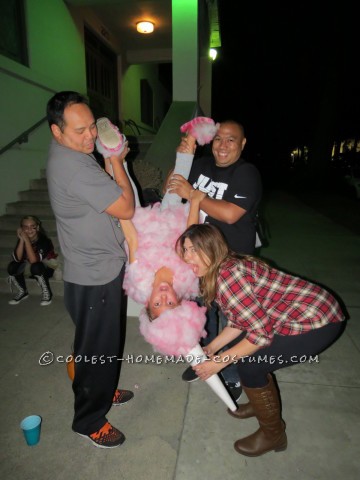 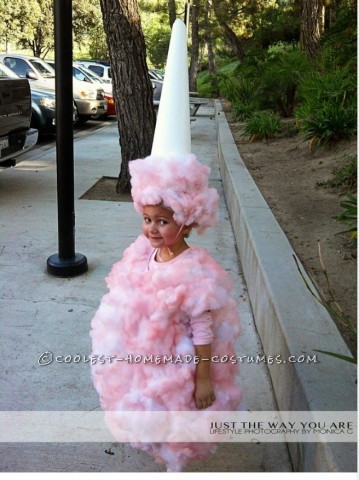