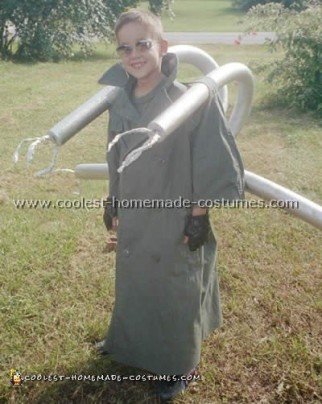 My son Alex wanted to be Doc Oc. and of course there are no costumes for him. So we came up with original costume ideas that we saw on the web. The “arms” are noodles (like you use in a pool) spray painted with silver spray paint, wire for the claws and tin foil wrapped around them.

The trench coat (ala Chow Yun Fat!) came from Goodwill, the gloves and sun glasses from the dollar store. And the smile? That’s all his! 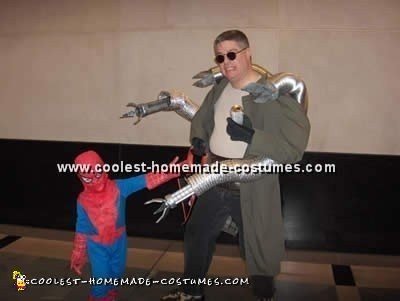 A Doc Oc with working Octopus Arms – bet you haven’t seen original costume ideas like this one! The coat and everything else was pretty standard thrift-shop fair. The middle “Belt” or “Back Harness” was made from vinyl left over from past years costumes. Just decorate paint and wrap around his middle.

So the real trick is the arms. All four octopus arms are made with flexible dryer ducting. The top arms have fake claws made from carved Styrofoam. The top arms were anchored into the back harness with staples and wire. They have wire in them to help in posing. The bottom arms actually move! They have toy store “Doc Oc” grabbers threaded up in them to the performer’s real hands.

Inside the costume the performer had to keep his elbows in close to his sides so the arms could come from his lower sides and not his shoulders. So if his real hands are operating the Doc Oc arms where do you get human arms?

We used 1X1″ wood to build an armature structure inside the sleeves of the coat to act as real arms. We crumpled up grocery bags to give the arms some thickness. The hands were 9-guage wire inside normal gloves and bent into useful positions. By giving the hands something useful to do (like holding a drink) the illusion is enhanced. A little glue helped this work better.

Doc Oc was a huge hit at the office! Its doubtful that a little kid could pull this one off so let dad be the villain and the kid can be Spiderman the hero!