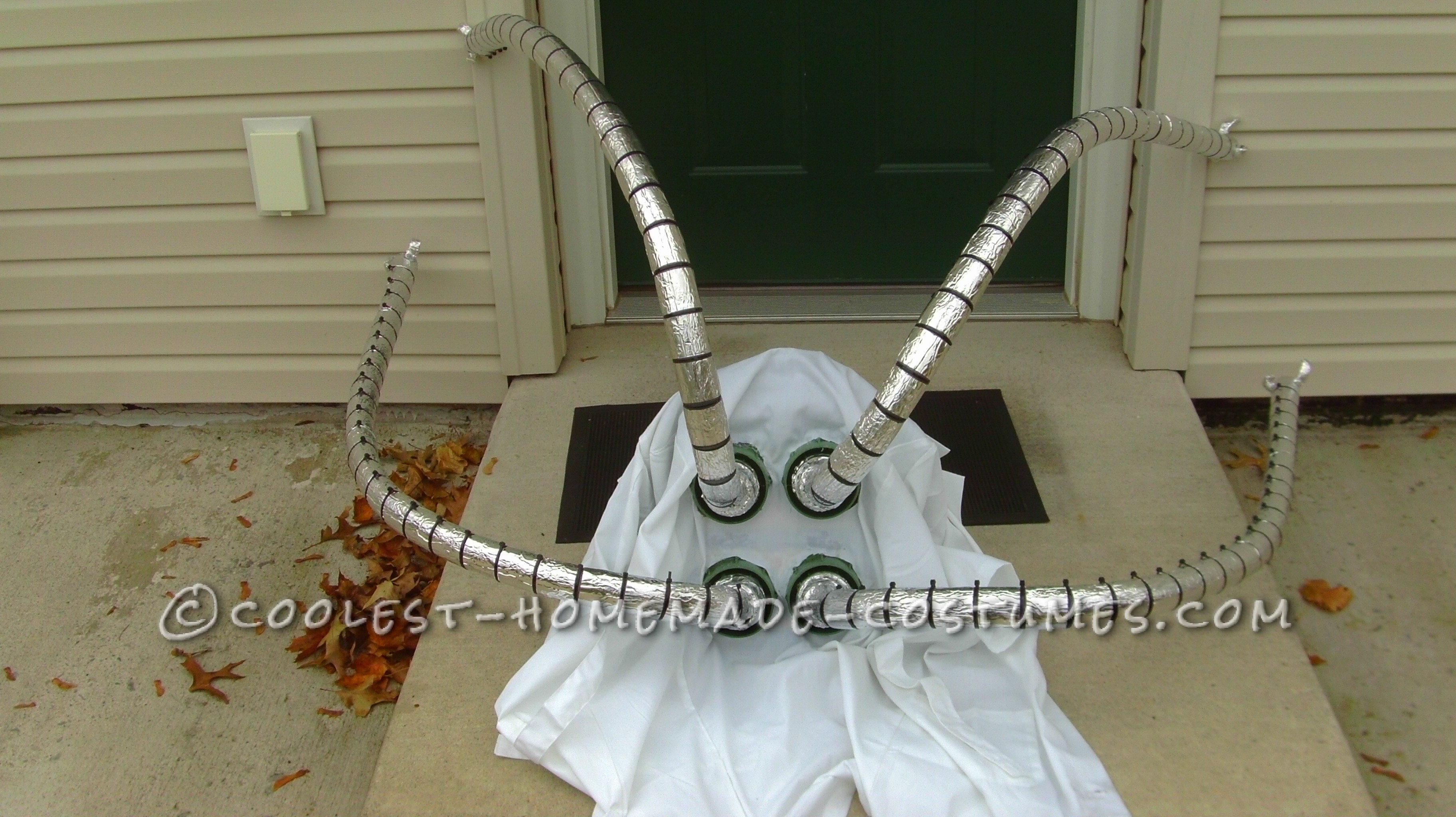 I always wanted to make this super villain and I had to get very creative as the long arms pose a lot of challenges for wearing, storing, and weight, etc. Initially, I was going to use aluminum heating ducts which are bigger and look good but they are harder to store and fragile to bend and dent up fast so I decided to just use foam pipe insulation and use aluminum tape to make them shine well for night time. I don’t have a lot of time to do my own costumes since I do them full-time for others, so doing this on the side for fun. This will be inspired by the comic book version which is my favorite with some modifications due to limited time and budget.

My costume as usual was a HUGE hit as Dock Ock, and kids went crazy, most loved me, many were scared; still, many cried, many cheered etc. A lot of awesome quotes as usual, one lady called me “Octavius Prime” which I guess is a combination of Octavius and Optimus Prime, lol! Hundreds to thousands of Kids were screaming “Dock Ock!” One little one said “Best costume Ever!”. “I was asked many times “Where is Spider-Man?” and I said in a mean voice with a scowl “I don’t know, but I am looking for him”. Was a pain to make and slightly a pain to wear and control my long arms but I bent them in some to help. One poked my Mom in the eye as I turned after the parade, and I told her they have a mind of their own and are pure evil, lol! Was hard to see at night too in those goggles and they fogged up a lot, but I am used to not being able to see much there at night, got about 35 years experience.

But yeah it was a great hit and I played the character well and was a lot of fun. It is great to do some other things other than horror which I did all my life and what I love to do most, and this is still a villain so it kinda felt the same. I also got a lot of people saying “Wow that is very creative!”, “Did you make that?”, “Can I shake your tentacle?”. I think next year it might be time to go back to horror though and scaring everyone in town for sure as that is what I love to do best, and usually accomplish that by just walking and looking. I also turned a little Superman’s knees to jelly when I walked towards him as he bit his nails and hugged his Mom who said “Oh no, Dock Ock is coming for you!”. Was a great time as usual. Wish I could get all the pics and videos people took.

I made the arms out of foam insulation tubes, and then added aluminum foil and twisty ties for the segments, took awhile to do all that by hand. I constructed a back pack to wear and added grates from Lowes and PVC connectors, and then added some wire through holes that I drilled and connected it all to the white lab coat to be worn all as one piece. I then made the belt out of foam with foam knobs to look just like the 7 inch figure which this look is based on, as well as the comic book and cartoon look. I also added big round goggles, and a wig that I cut shorter for the bowl cut look. I then added a green shirt and pants and black combat boots. I slid on the tubes and taped them in place with aluminum tape and the arms were adjustable by bending the wires around to wherever you want them. Was tough getting through crowds with them, even bent in more. I also made the little claw fingers out of foam and aluminum tape that were also adjustable.

Was an EPIC win as kids were screaming all over, and parents loved it as well! SirBrad FX. 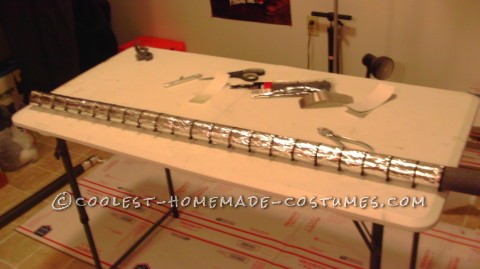 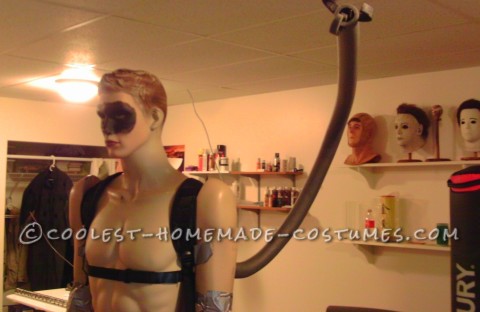 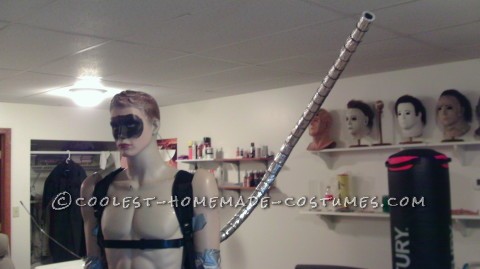 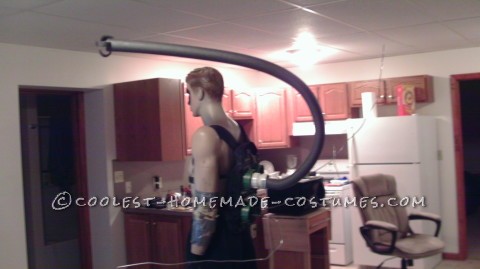 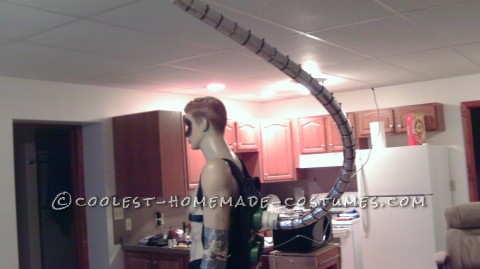 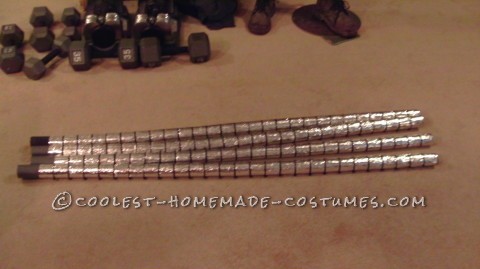 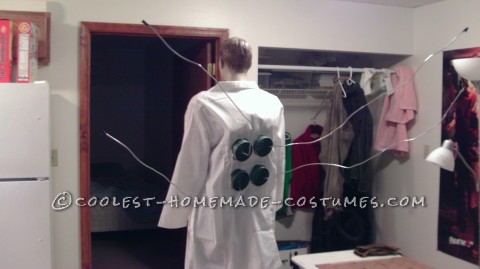 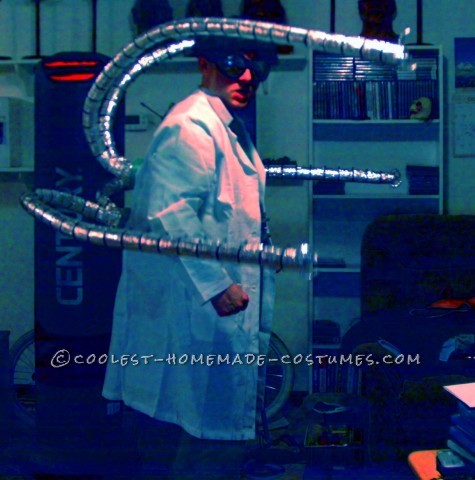 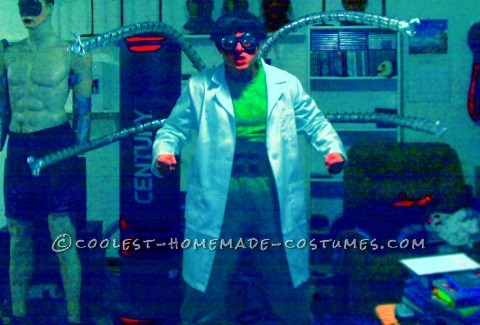