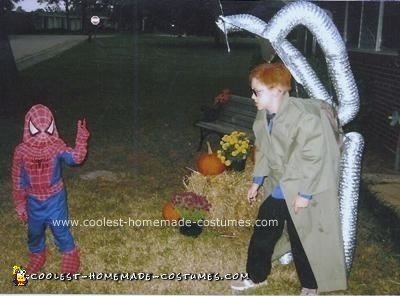 My youngest guy wanted to be Spiderman so his brother asked me to make him Homemade Doc Ock Costume for Halloween. I found an old trench coat at Salvation Army and put slits in the back to accommodate the arms. The arms are dryer tubes that I attached to an old backpack, one of the kinds that clips in front near the chest for support. The backpack was for comfort.

To give the upper arms shape I braced them with thin metal poles. The metal poles go into the dryer tubes and are reinforced with metal flashing tape. The claws at the end of the arms are cardboard covered in tinfoil. When he walked the arms would move around as if they were alive. I went on the internet and poured over pictures of Doc Ock to get the angle the way I wanted it.

In the center of each claw I put shiny red cardboard. We dyed his hair as brown as we could get it and picked up some Doc Ock style glasses. Collecting everything took about a week and construction took about 4 hours. The clothes underneath were a button down shirt and black pants like in the movie. We had a fantastic response to this costume.