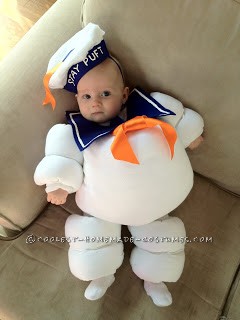 From the moment my daughter April cracked her first smile — a wide, brilliant grin like the shape of a capital D on its side – I had a vision.  She was only 10 weeks old at the time, and Halloween was over four months away, but that smile (not to mention April’s adorable baby-chubby legs and my affinity for cult films of the 80s) inspired me. In an instant, I decided upon her very first Halloween costume: the Stay-Puft Marshmallow Man of Ghostbusters fame!

Caring for a young baby is no small task, and April was my first, I was exhausted.  I hesitate to admit it here, but I would have loved nothing more than to make the costume of my dreams appear with the click of a mouse.  Much to my disappointment, though, there was no such thing as a “Stay-Puft-Marshmallow Baby Costume” anywhere on the internet.  Believe me, I looked!  The costume had to happen, though.  Another year or two and I knew she would be asserting her own preferences for (presumably) less “embarrassing” getups.   So, unwilling to relinquish my precious idea, I figured I would have to whip something up myself.  Not to worry, I come from a long line of crafters, so I did what my own mother would have done… I fired up the glue gun!

A few trips to the local fabric store (Winmill Fabrics in downtown Boston), a bit of trial and error, lots of laughs, and about 17 sticks of glue later, the costume came to life!  We logged plenty of miles with it, too.  April was a sport and wore it three days in a row to three different parties.  I even cobbled together last-minute Ghostbusters outfits for my husband and myself so that we could have a family costume theme.  It was a tremendous success – nobody could get enough of that little marshmallow.  We even won the annual costume competition at my husband’s office party!  Nearly a year later, people still talk about April the Stay-Puft baby!   April is already quite the vocal girl and FAR too mobile to wear such a cumbersome, puffy disguise, so I’m really glad I stuck to my guns (or, should I say, my proton pack?) and made her first Halloween such a memorable occasion.   Hopefully one day she will look back on the photos and be happy that her mom had a sense of humor and a knack for crafting!

(Note: Please see the rest of my entry for crafting steps). 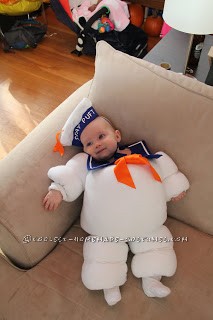 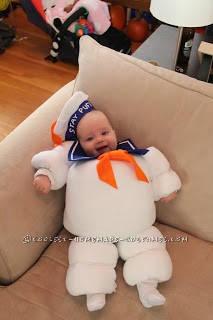 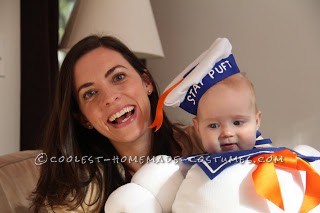 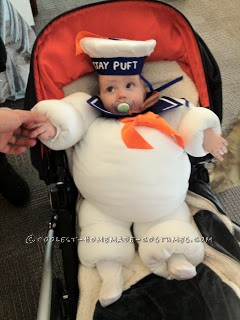 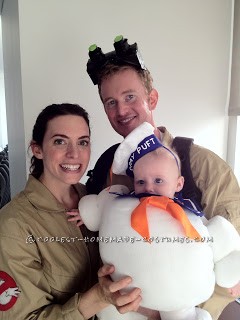 The key to this costume was the PUFF factor.  I purchased about three yards of thick white jersey fabric, a 3-pack of white cotton baby onesies, and a pair of white cotton footed baby pants.  Oh, and a big bag of pillow stuffing, of course!

My first thought was to overlay jersey fabric onto the trunk of the onesie (glued down at the edges), stuff it with the filling, and glue it down directly to the onesie.  Then I would do the same with the arms of the onesie, and then the pants.  I would make “rolls” for the arms and legs, to mimic the movie character (see photo).  Once I completed the trunk portion, though, I realized there wasn’t much room to put a baby inside of it.  It would have been a tight squeeze, but doable.  Then I had a thought… GASP… what about the unexpected diaper change?!?!  We would need a costume that allowed for a quicker (and cleaner) escape. Back to the drawing board!

At this point I still had 2 onesies left, and plenty of fabric and stuffing.  Plus, I hadn’t messed with the pants yet.  I decided to use the onesie and the pants as the foundation garments and make every other component of the costume easily removable.  Never know when your six-month-old baby will require you to make a hasty getaway!

For the body, I crafted one long, flat, “pillow-like” piece that would wrap around April’s middle and close at the back with a Velcro flap.  I repeated the same process for each arm and leg, except for these pieces I added “rolls.”

Here is a shot of April getting ready — you can see what she was wearing underneath all of the puffiness. 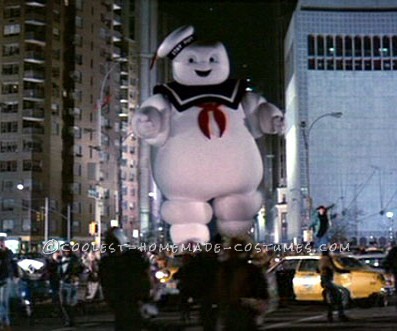 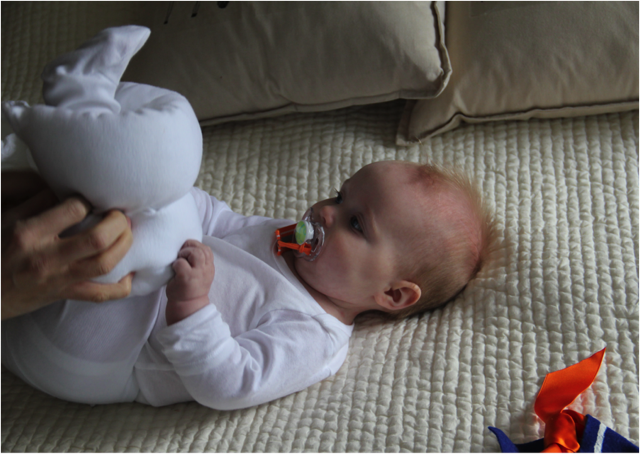 Mr. Stay Puft has three key accessories – a bib, a scarf, and a hat.  In this case, April’s size was an advantage, because I could make everything with standard 8×10 pieces of felt (plus some ribbon and puff paint).

For the bib and scarf, I combined them into one garment by using a thick orange ribbon in place of the scarf and securing it to the underside of the bib with glue.  The bib itself was one piece of royal blue felt with a semicircular cutout at the neck.  I glued two pieces of thin royal blue ribbon at the back for a tie closure.  I made a white border around the edge of the bib using opaque puff paint.  Worked like a charm!

The hat was just a touch trickier.  Again, I was able to use a single piece of felt (white felt this time).  I cut it into a very large circle and then made notches all around the edge.  I could fold these “flaps” inward to make what almost looked like a policeman hat.  I made a ring of wide grosgrain royal blue ribbon, and I tucked the edges of the felt flaps inside the ring and secured it with glue.  Again, I added thin royal blue ribbon to the hat so that I could tie it under April’s chin.  Last but not least, I topped the hat with Mr. Stay-Puft’s trademark orange ribbon (and a “button” of blue felt, left over from the bib).  And, of course, I monogrammed the hat with white puff paint. 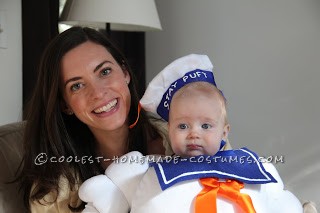