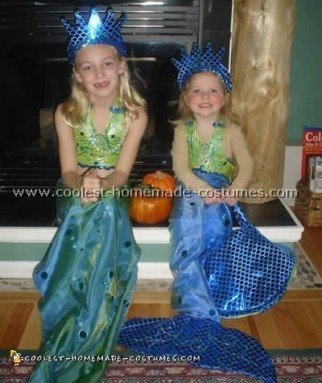 My niece Molly is a sea animal lover. Last year it was a dolphin costume for Halloween. Always a challenge for Auntie! She and her sister Kate were the Little Mermaids this year thus the mermaid costume. I found some beautiful blue fish-scale material and snapped it right up. That would do for the tail, crown and shell “purse”. Batting material was sandwiched in between the layers for these items to provide stability.

I chose blue taffeta for the underskirt/fin and variegated blue/green chiffon for the outer skirt. This was enhanced with blue and green sequins once sewed. I made a “tube” shape for the fin and had a long slit in the back so the girls could walk. For the halter top I pieced together a shiny lime- green material and embellished it with glitter paint- pens sequins jewels and sequined trim, definitely very “Queen of the Sea!”

Sewing it all Together

The sewing of the mermaid costume was simple, just a couple of seams and an elastic waist. I drew a pattern from newspaper and adjusted it to fit each girl. One could even use a glue gun for this entire costume! For the crowns I used a “foamie” ready-made crown covered it with the fish scale material and festooned it with sequined trim. I also drew their initials in glitter paint. In order for the girls to Trick-or-Treat with the tight skirts I fashioned a material loop on the tail that they could wear as a “bracelet” so the long skirt wouldn’t drag or trip them as they skipped along the neighborhood. they were adorable! 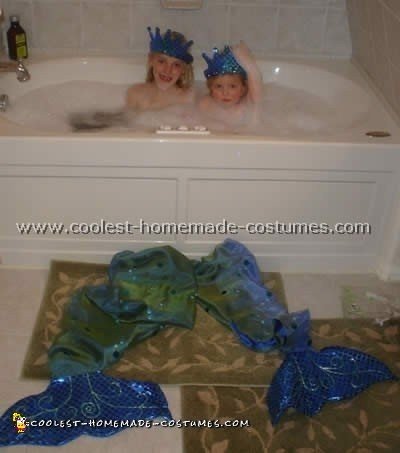 Princess of the Sea 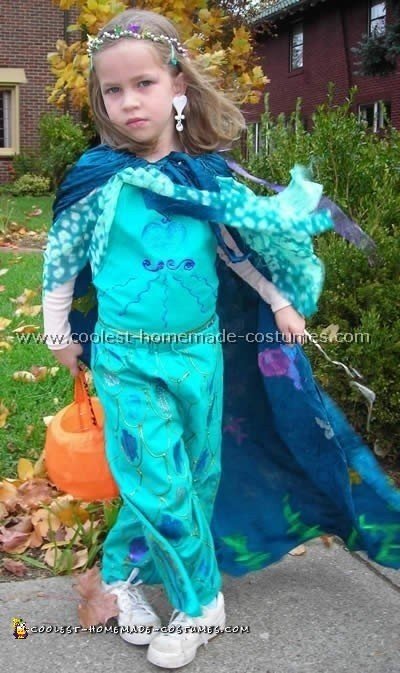 This mermaid costume was made from a remnant of blue-green heavy cotton broadcloth. The “tail” is cut as a pair of child’s pull-on elastic waisted pants but with the bottoms of the legs very flared. After sewing the side seams all the way down the pants are turned right-side out and the outline of the fins sewn with stiffening in between the layers of fabric. We used a plastic milk carton and cut the flared triangular shape.

The mermaid’s top is halter-style. we just cut a right triangle folded the right angle corner over to make a casing for a ribbon to go around the neck and tied the other two corners behind. The child with adult’s help decorated the “tail” with blue, purple silver and gold fabric paints painting on scales and coloring some of them in. (We used metallic paints to make them shimmer.) The child decorated the top with different watery wavy designs including a heart on the front. (Note: the paint takes longer to dry than one might expect so leave time!)

The cape was a remnant of lighter weight blue-green fabric. Ours was knit and hung and shimmered nicely. We sewed a casing along one edge and used a ribbon of the same fabric to tie around the neck. The child painted the inside of the cape with fish and water plants. Unexpectedly this soaked through the fabric and showed on the reverse though more faintly.

So we bought a remnant of sheer green print fabric and tore it into strips then added strips of sheer blue and purple that we already had. We then sewed these as streamers of different lengths to the outside of the neck edge so they fluttered down: seaweed.

We added a crown of twisted beaded metallic wires in purple gold and green (the kind of wire one can buy in a craft store) with streamers of curly ribbon hanging down behind. Our crown was an old souvenir from a fair but would’ve been easy to make. The mermaid costume was completed by streaking the child’s eyelids and brows with purple, blue and green eye shadow. 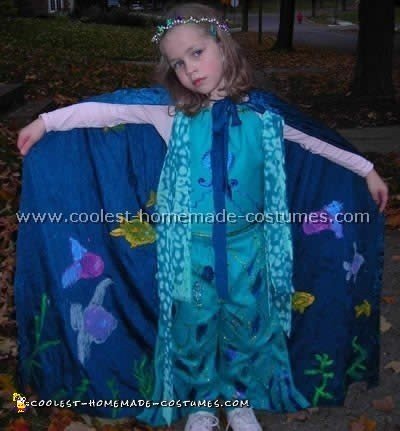 Costume by Kim A., Round Rock, TX 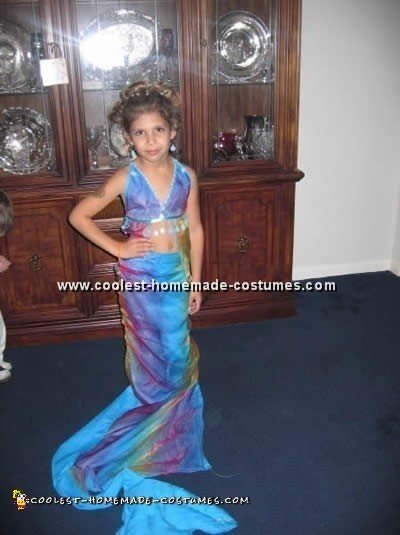 I was able to make this Mermaid costume in 4 hrs (except for the beading)! I got 1yd. of turquoise fabric and 1yd of the rainbow see thru fabric. Also… for the straps and edges I got 1 package of binding.

I sewed a ribbon that had the beads with the shells already on it (store-bought) along the seam where the top and bottom of the top came together. I did some embellishments with the ribbon at the shoulders and the chest. Also, I made crisscross straps from the shoulders to the opposite sides of the underarms.

The skirt/tail is very simply a tube… one strip of turquoise fabric down the back is longer with the tail fin attached. The other is turquoise fabric with the rainbow fabric gathered along the seams. I made the tail using a wire hanger that I shaped into a tail. I cut 2 pieces of fabric the same shape and then sewed them together – I then put the wire hanger into the fabric and added some batting material to make it softer and fuller.

As far as the beading goes – I just did some strings across the turquoise strip in the back and some beading on the neckline and straps on the top. That was it! 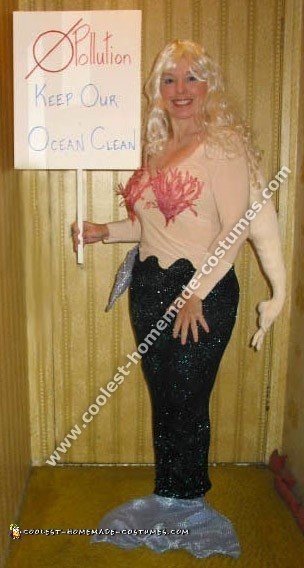 This mermaid suffers from birth defects from polluted ocean waters, so she has a third arm and an extra small fin at her right hip! She is picketing to “Keep our oceans clean”. I got LOTS of attention, all big smiles and compliments on the mermaid costume, so I consider it a hit.

The costume is machine sewn. The top is nude stretch swimwear material, to look like skin, and the bottom is a stretch glittery/metallic to give the appearance of a fish tail. I had lots of choices of evening wear fabric from which to choose. I picked one I thought gave the impression of scales and fish tail sparkle.

For the costume I used a simple tee shirt pattern for the top and took it in to be form fitted. The mermaid costume tail is whatever width you need to go around your hips, then tapered to the bottom to fit snugly around your ankles.

The mermaid costume fins are three layers. I drew the fin patterns freehand. I used a sheer blue fabric that has a little body to it for color behind a sliver glittery fine mesh gauzy evening fabric for the top. For substance and to give the appearance of water drops, small bubble wrap worked great as a fill layer cut to shape and tacked in place inside!

The third arm of the mermaid costume is simply a long sleeve with a hand attached and filled with poly fiberfill. I traced my own hand on paper, cut two, then sewed those together before attaching the hand to the sleeve, so that I could have one long seam up the back of the arm from the wrist to the armpit.

I shaped the palm of the third hand with a short row of hand stitching pulled tight not to show. After stuffing, I inserted the third arm shoulder seam between the back and sleeve seams of the top and stitched the seam. For support, I used a nude bra and blind stitched the shoulders of the top to the bra straps. To get into the mermaid costume, I’d step in from the top, pull it up to my rib cage, hook the bra first, and then pull the straps up. It worked great! I knew everyone would tug on the extra hand, and they did, and it held in place great!

I used a 24″ invisible zipper on the right side seam, opening from the hem up to the hip to open the tail so that I could drive, walk, use the rest room, etc. In addition, I safety pinned the bottom fin up when the zipper was open, although it wasn’t absolutely necessary if I was just walking around. This mermaid wiggled her way through several nights of West Coast Swing without any snags with it pinned up!

Once the hem is done with the zipper closed, I measured where to attach the bottom fin with the shoes on that I was going to wear with the costume, heels. I hand sewed the top of the fin to the inside of the tail so that it would emerge from the bottom hem and lay across the tops of my feet to cover my shoes and make it appear that I was standing on my tail.

The “seaweed” bust covering is hand sewn in place, tacked where needed for coverage. I used artificial aquarium plants from the pet store and cut the stems off. This was the anchor that holds them to the bottom of the tank.

The wig of the mermaid costume is a Halloween cheapie from Rite Aid.

To carry my essentials while partying, I cut a fish shape from the tail fabric and sewed it into a drawstring bag (not pictured), which worked really well. I hung the bag off my arm and it looked like I had just made a fresh catch!

I took three days to make this mermaid costume, working on it for a few hours a day. Sometimes I had to stop to let my brain figure out how to construct part of it. Such as the “how to drive in a mermaid costume” and “how to make the fins look right” dilemmas. There was some hand sewing of the hems, tacking linings, etc., but not a lot.

Were I to make one again, now that I know where I’m going, I’d estimate two days. Once the stuffed arm is attached, it slows down some of the sewing. This is because it makes it awkward to handle the fabric.

As I said, everyone loved this mermaid costume, friends and strangers alike. I do a new costume every year, and I’d not seen a mermaid costume in the last three years. Also, I’ve never seen a nuclear mermaid , so there you have her! She proved beauty isn’t skin deep. Everyone loved her — and especially her third arm!