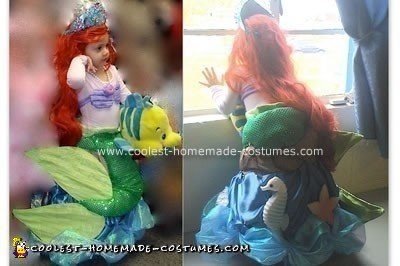 I started off making a sketch of front and back. My daughter and I shopped for the perfect materials from the fabric store and I began her costume. I hand sewed everything. The idea for the costume: My daughter being the actual mermaid sitting on a rock in the ocean.

I used no ready made patterns. I started off using 1 yard of satin feel material to make a drawstring skirt (one could also be purchased.) Under the skirt I pinched sections and sewed the small pinched section to make a diamond design.
Next I free cut the shape of a tail from the sequin green material and sewed it inside out, leaving the waist part open. I stuffed it with a light polyester stuffing.

After a few sketches and thoughts I figured out which tail fin design would work best and drew it onto a piece of very light cardboard (a cereal box would work best). Next I cut out pieces of the light green fin material and sewed it onto the pieces of cardboard for firmness. I sewed all the way around each fin.

The brown rock material I placed around the top of the skirt and cut as needed to look like a small rock on top. I then hemmed it on the edges. Also I took a brown marker and permanent black marker and made lines on the material to make it look more like a rock and distressed. I then sewed it onto the skirt around the waist as well as the bottom of the rock.

Then I took the open waist of the mermaid tail rolled and tucked it under the waist fin and sewed together. The seashell bra I made by using double layer purple material with a shimmer top layer. I cut out two large ovals and made them look like seashells by pleating them, pinning and sewing by hand. I attached them to the bodysuit by sewing and made a matching rolled back strap. I also added a jewel button as the bellybutton.

For the surf/waves, I pleated and folded the surf crepe material and alternately sewed every 5-7 inches and poofed out the material in between.
For the back of the costume, I cut out another piece of green sequined material in the shape of a sitting bottom and sides. I put padding in between the material and the skirt to make it look like the mermaid is sitting on the rock from the back. I sewed the bottom and sides to the skirt so it truly looks like the mermaid is just sitting on the rock from the back of the dress.

Lastly I added very lightweight plastic accessories of a sea horse and starfish by hot gluing them to the back of the skirt as actual sea life.

It took me about 40 hours total creating, making mistakes and redoing and sewing by hand.
My Lil Princess just loves her costume and so do I. I hope she’s “caught” your fancy too. 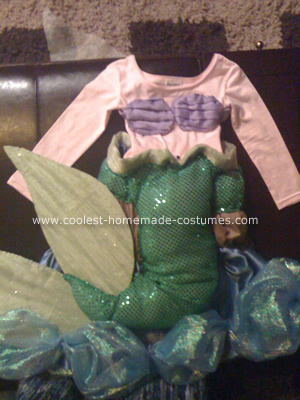 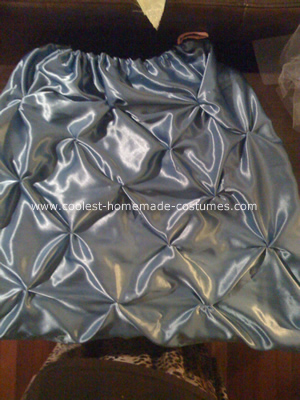