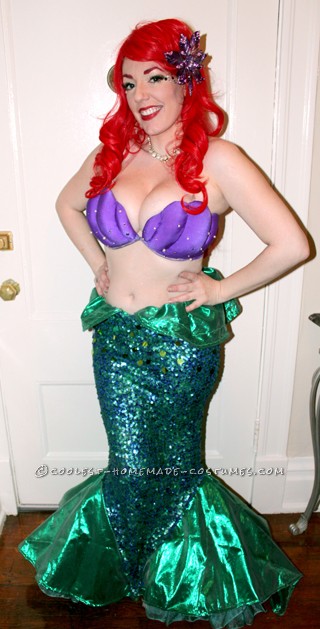 Starting off I made the fishtail with a stretchy sequined 1980’s prom dress. It needs to be a bit stretchy and not too heavy. You need to put the dress on and decide how high you want it before you cut the skirt. I pinned the places I wanted the fins and then cut the skirt and left a pointed front and back. For the top fin I cut a piece of fabric in a large crescent shape. You’ll need a large crescent because you’ll be using the sewing machine to ruch it as if you were sewing a skirt. When you pin the top fin to the skirt you’ll need to put it on yourself and then pin, that way it’s not too tight when you sew it. Make sure when you sew it you pull the fabric so that it’s doesn’t become too tight on top, if that seems a bit hard I suggest hand sewing. For the bottom fins I cut up an older square dance crinoline, I really only needed a 1/4 of the crinoline on each side as it was so poofy. When making the bottom fins cut them in a large fin shape. When you sew them up sew them to the tips only and leave the bottom open with a finished hem. I sewed the crinoline and the fin fabric at the same time to the skirt. I put the dress on so that I could pin up the fishtail to exactly where I wanted it. Make sure you add a lot of pins so the fabric does not fall out. Once you’ve sew the tail cut the extra fabric on the inside and you’re done with the tail. The tail took me several tries so don’t get discouraged if you don’t get it perfect instantaneously.

For the seashell bra I needed something that didn’t weigh me down too much as I’m a bit busty. I bought a Victoria Secret strapless bra at a thrift store for $8. To start I cut the top of the cups into a rounded seashell shape. I then drew some lines so that I would know where each piece of fabric would go. I made a template with paper for the fabric with the lines I had drawn on the bra. Make sure the template pieces are a little bigger then the actual bra, you’ll be stuffing them. I cut up my purple fabric and and sewed each piece together. When I tried to attach the purple fabric with my machine I had some extra spaces that needed to be hand stitched closed because the underwire got in the way of the machine. After you hand stitch the bottom you can add fake pearls and sequins, I did this by hand. When you’re done with the pearls and sequins pin the fabric to the lines you drew out. Do no worry if there is excess fabric on the top, you’ll be stuffing each shell piece. Now sew each shell along the line with machine or by hand, if you use a machine you might need to sew up the bottom close to the underwire by hand. You can now stuff each individual shell with the bag of stuffing you bought. It was a strapless bra but I wanted a little more support so I attached a clear strap. If you cut off the  pieces on the inside to hold up the strap you’ll need to make new ones. I would suggest adding them before you close the top seam. The top will still have some excess fabric so cut that off and sew the top closed. Repeat the shell on the other cup and you’ll have the front done. If you bought a tan bra like I did you’ll need to make a template for the back of the bra with paper and cut out the pieces with the purple fabric. I took the hook and eye pieces off so that I would have a more seamless look the the bra. I then sewed the pieces with my machine and reattached the hook and eyes with my machine. I did a lot of this bra by hand because I wanted a more seamless look but you can use your machine for quite a bit of it.

For the purse I got a stuffed Disney flounder toy off of Ebay. I bought a cheap blue little girl’s purse at the thrift store for the strap. I got a small zipper at the craft store, and yellow fabric. Staring off I cut open the top seam of the stuffed animal. I then gutted most of the stuffing, I kept the stuffing in the front of the face and all the fins and a little in the bottom for support. I added the zipper first by turning the purse inside out and sewing it with my machine. I then added the straps by cutting two small holes in the top seam and sewing them in with the machine also. To make the lining I cut out a template with paper using the stuffed toy as the outline. I then cut the yellow fabric with the template and sewed each piece together. To put the lining in I turned the toy right side in and pinned the fabric to the edging of the zipper. I kept the zipper open and sewed around the top of the fish. Now you have bot an accessory and a purse for all your items.

The flower I found in the craft store in the Christmas section. It already had a clip attached to it, I just added a little silver paint to give it more depth. I found the Sebastian toy on Ebay. It was a wind up Burger King toy they released when the movie came out on DVD.

I hope you enjoyed my Little Mermaid costume and I hope yours turns out just as good or better! 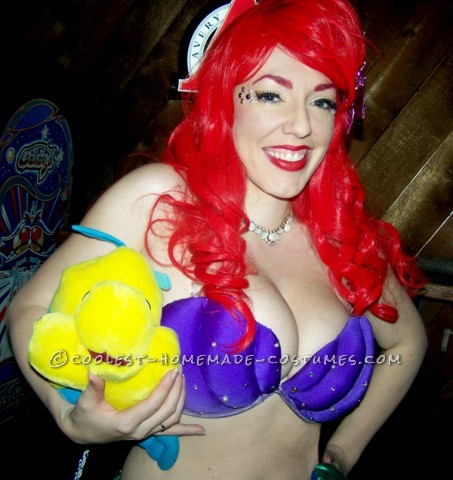 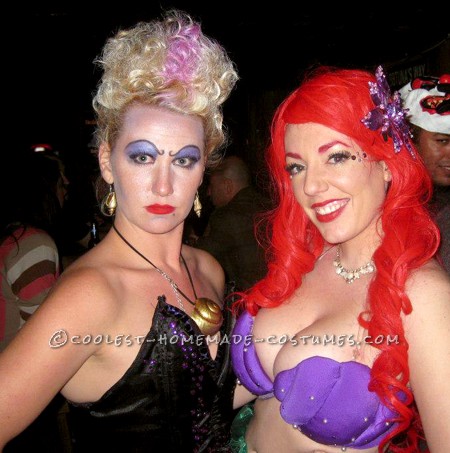 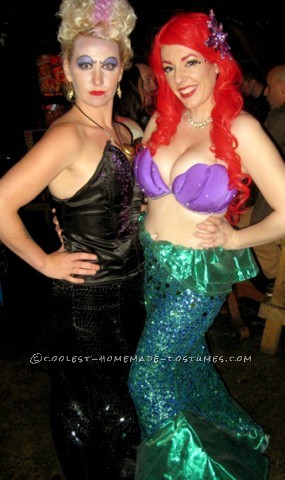 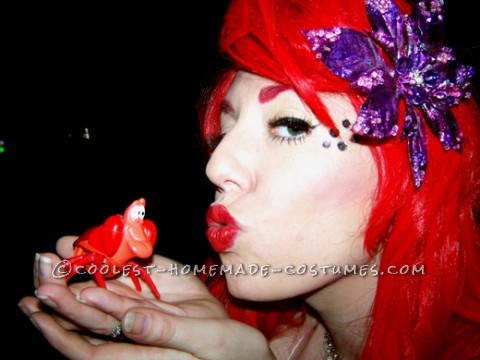 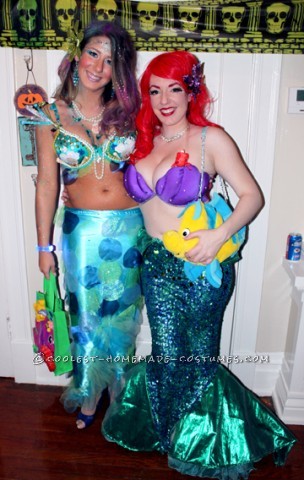